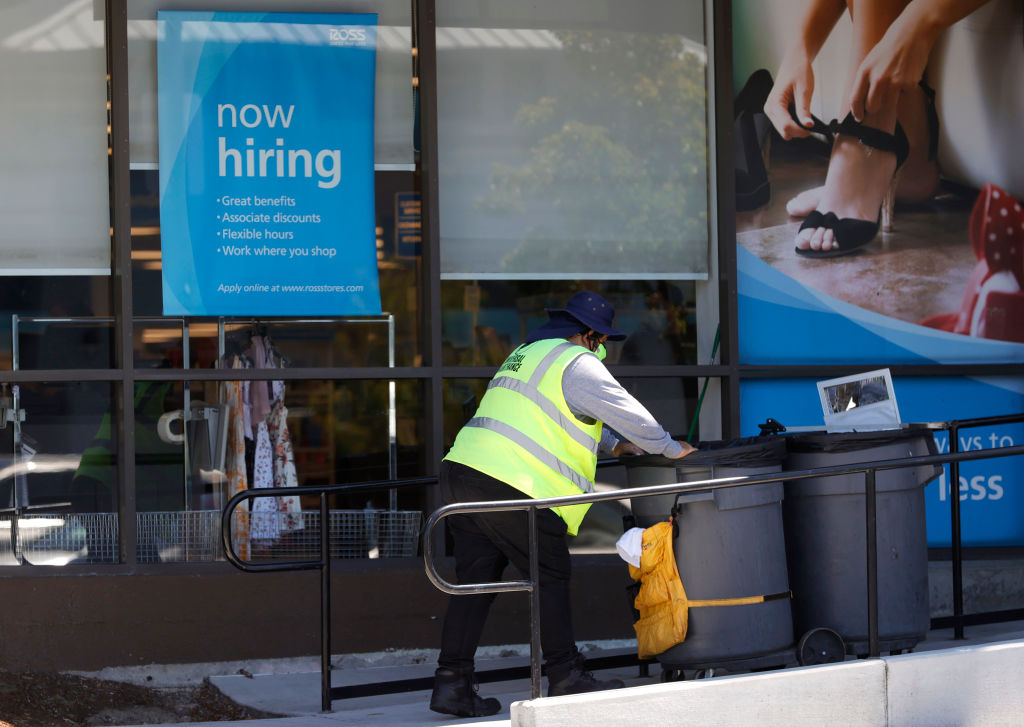 A worker pushes a cart outside of a Ross store in Sausalito, California. Photo by Justin Sullivan/Getty Images.

A powerful tidal wave is building, feeding off the primal desire to reclaim a lost sense of normalcy. There is no place in the country where that desire is closer to fruition than in California, with COVID infection rates lower than in any other state and a full reopening only a day away. Even for those who have had a taste of liberation from the purgatory of the past 15 months, June 15 looms large, promising a return to something we thought might be gone forever.

Amidst our collective sense of relief, it is so easy to forget what normalcy actually means. For many, it is material comfort, an abundance of food, shelter and leisure without the stalking horse of an invisible killer that cut off physical contact and rendered everyone vulnerable.

But for a shockingly large number of people in the nation’s most populous state, normal was — and is — an entirely different reality. As we move headlong into reopening, we would do well to ask ourselves if we are really willing to let so many of our fellow Californians go back to a way of life nearly as perilous as the one we are now leaving behind.

Here is a snapshot from that halcyon time just before COVID-19 turned everything upside down:

The economic devastation that accompanied the pandemic has been concentrated among the very people who were already struggling. While the extremely rich generally got much richer, those on the margins endured not only catastrophic job losses but enormous personal tragedy.

The double whammy of pervasive economic inequality and racial discrimination left poor people and communities of color most vulnerable to the pandemic. But as COVID-19 recedes, we face the prospect of returning to a status quo of chronic suffering, minus the headlines that have focused our gaze these past 15 months.

Big ideas and ambitious public investment will be needed to attack the roots of California’s dystopian economic and social order. The intertwined homelessness and affordable housing crises will not yield to the kind of tinkering that has mostly characterized our policy solutions, nor will the advent of a $15 an hour minimum wage substantially reduce working poverty.

As the state reopens, solutions laid out in recent reports such as “A New Social Compact for Work and Workers” must be debated vigorously and urgently. Commissioned by Gov. Gavin Newsom, the report sets forth a number of hugely ambitious ideas, including the elimination of working poverty in California by 2030 and the creation of a portable benefits plan for the state’s millions of gig workers. These proposals are likely to meet fierce resistance from powerful elements of the business lobby, notably the California Chamber of Commerce, whose annual “Job Killers list” targets a wide range of legislation designed to combat economic inequality, and does so with remarkable effectiveness.

The urgency of pushing back against the CalChamber and other opponents of rebalancing economic power is made more acute by California’s enormous budget surplus, which has created a rare opportunity for the kind of investment that could be transformational. Large-scale funding increases for education, affordable housing, child care, the social safety net — all are possible, and desperately needed.

This will only happen, though, if there is a groundswell of public support for a new normal that relegates rampant inequality to the same dustbin we hope will be the permanent home of COVID-19.