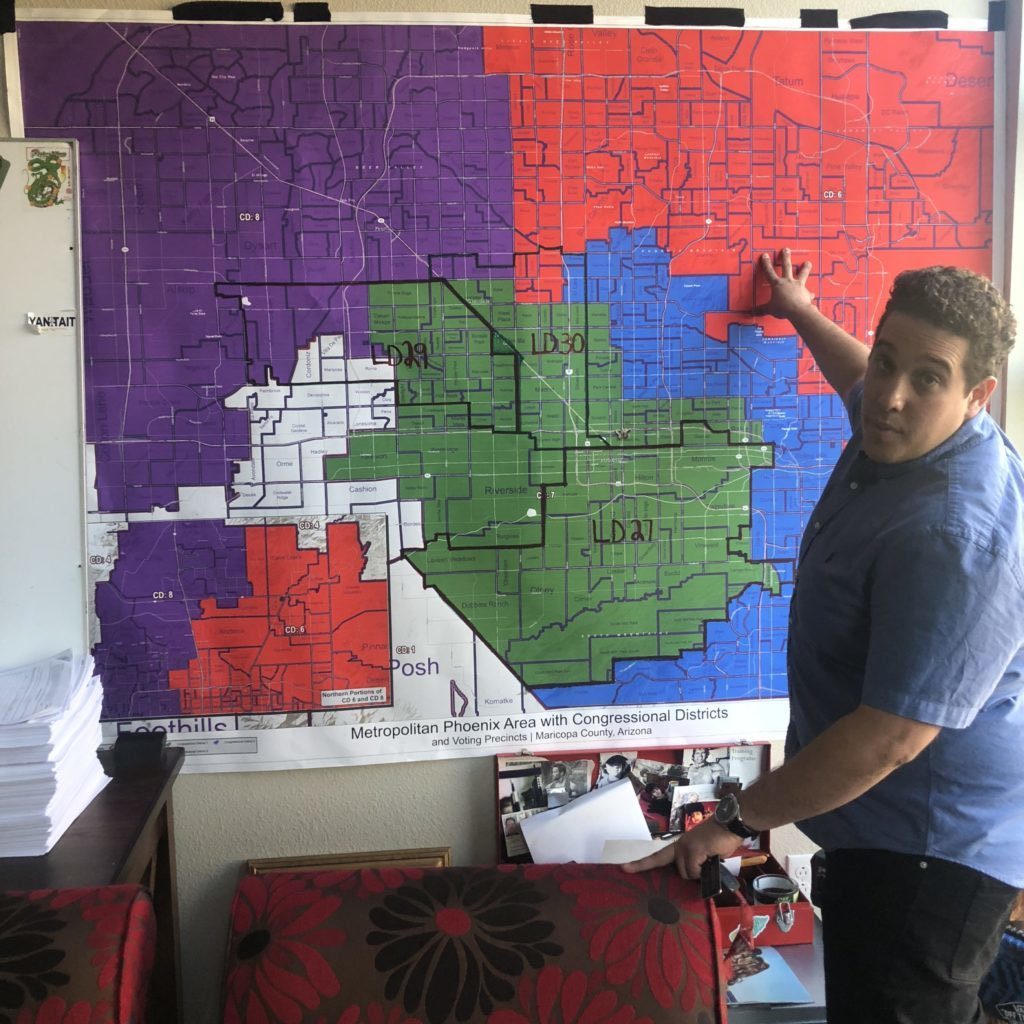 An Arizona Activist Who Can’t Vote Gets Out the Vote

An anti-immigrant law made Tony Valdovinos miserable, but he didn’t leave Arizona. Instead, he knocked on doors.

Had the Maricopa County Community College District Governing Board not voted to start charging undocumented students out-of-state tuition, Tony Valdovinos might have stayed, in his own words, “oblivious.” He knew, of course, Sheriff Joe Arpaio’s deputies were known to stop immigrants for broken taillights and refer them to ICE, but he didn’t worry too much about them because he walked to school. And he knew Proposition 300 prohibited Arizona universities and community colleges from classifying undocumented students as in-state, but he didn’t worry about this either. He’d learned that as long as he took only six credits each semester, he didn’t have to provide proof of citizenship to his community college. But in the spring of 2011, the governing board closed this loophole. Valdovinos would now pay $317/credit instead of $96/credit, no matter how few classes he took.

The stated goal of this measure was to enforce the law, but its unstated aim was to make life so miserable for undocumented people that they would leave. It did indeed make Valdovinos miserable, and he did drop out of school. But he didn’t leave Arizona. Instead, he stayed and knocked on doors.

At first, he planned only on attending a governing board meeting to point out how much money the community college district would lose if it priced out undocumented students. The governing board members were largely unmoved, but there was another undocumented student at the meeting, Viri Hernandez, who was impressed enough to approach Valdovinos after the meeting and ask if he knew how many people voted in his district. He didn’t. She showed him: not very many. As a result, his heavily Latino district was then represented by a woman who had supported Pat Buchanan for president and belonged to the Minuteman Civil Defense Corps. “I was like, wow, we don’t vote,” Valdovinos said. “And that’s why we just got kicked out of school, legitimately.” Hernandez told him if he was mad about this, he should come and canvass.

Canvassing, for free, in 110 degree heat, was not the easy nor obvious thing to do. It meant he’d have to disobey his dad, who wanted his help on construction jobs, and worry his mom, especially when his efforts started attracting the attention of local television reporters. Valdovinos would tell them, on air, something like, “We’re [undocumented] students out here fighting for better representation” but what his mom would hear him say was, “I’M RIGHT HERE! HERE I AM!” and then when she saw sheriff’s deputies, she’d clench up, like they’d seen her son on TV admitting he was in the country illegally.

That summer, Valdovinos, Hernandez and other undocumented students, collectively called Team Awesome, increased Latino voter participation in one Phoenix district by nearly 500 percent and helped elect the first Latino city councilman to represent that district. Their results were impressive enough to attract the attention of several state Democratic leaders and at least one national reporter, who profiled Team Awesome as part of a cover story for Time.

At this point, Valdovinos “experienced a very small percentage of possibly hoping we could fight for our futures” and so decided to work on another campaign, this time to oust Sheriff Arpaio. But he was still undocumented, and thus, still not able to work here legally, and so all he was offered was a volunteer position. (He and Hernandez still produced more volunteer door knocks than the paid field directors, he says.) Later, he received protection under President Obama’s Deferred Action for Childhood Arrivals, so he could legally work for other people, and even later than that, he started his own field operations firm, La Machine, so he could work for himself. He’s now run field operations for more than 20 campaigns, winning all but two of them. His superpower is turning Latino, low-propensity voters into high-propensity ones, and takes such pride in each conversion that he often visits the new voters on election day to take pictures with them and their completed ballots. In the last eight years, Valdovinos estimates that he has contacted approximately 750,000 voters—a number made all the more incredible by the fact that he himself still can’t vote.

Before politics, Valdovinos dreamed of joining the Marines. When at last he turned 18, he applied and got an interview, but wasn’t sure how to answer the citizenship question. So Valdovinos told the recruitment officer what his mom had told him: “We’re in some sort of process.” The recruitment officer told Valdovinos he was wasting his time, and the interview was over. Valdovinos was crushed, but he was also a little shocked: This was the first time he’d heard that he was undocumented.

Valdovinos never did get to join the Marines, but he’s done the next best thing, which is run La Machine as if it were the Marines. He “deploys platoons” to “do operations” in targeted precincts and gives new recruits extensive training in degrees of shade and hydration techniques. They also get exactly three water bottles for every shift—two chilled, one frozen—and each unit is equipped with military-grade first-aid kits in case someone is bitten by a dog or clipped by a fence. In his free time, Valdovinos reads Marine manuals about how to best mobilize supplies and people. “My code of conduct for the whole operation has been efficiency to effectiveness,” Valdovinos says. “Because if we’re efficient, we’re very effective.”

By all accounts, Valdovinos has been effective: His win record includes the current mayor of Phoenix, the first vice chair of the Congressional Hispanic Caucus, and an activist-turned-city-councilman several times arrested while protesting Arpaio’s immigration raids. Unsurprisingly, the other core members of Team Awesome have also gone on to do big things. Hernandez founded her own non-profit, Poder in Action, and Ellie Pérez, now the political director for the Arizona Education Association, recently became the first DREAMer to cast a vote in the Democratic National Committee as a distinguished superdelegate. Probably none of them would now be so politically involved or influential if not for the immigration policies in Arizona that had initially activated them—policies just like the ones the president is currently pushing nationally. No one should be surprised if they, too, incite a new generation of Tony Valdovinoses and Team Awesomes, not just in Arizona, but all over the country.