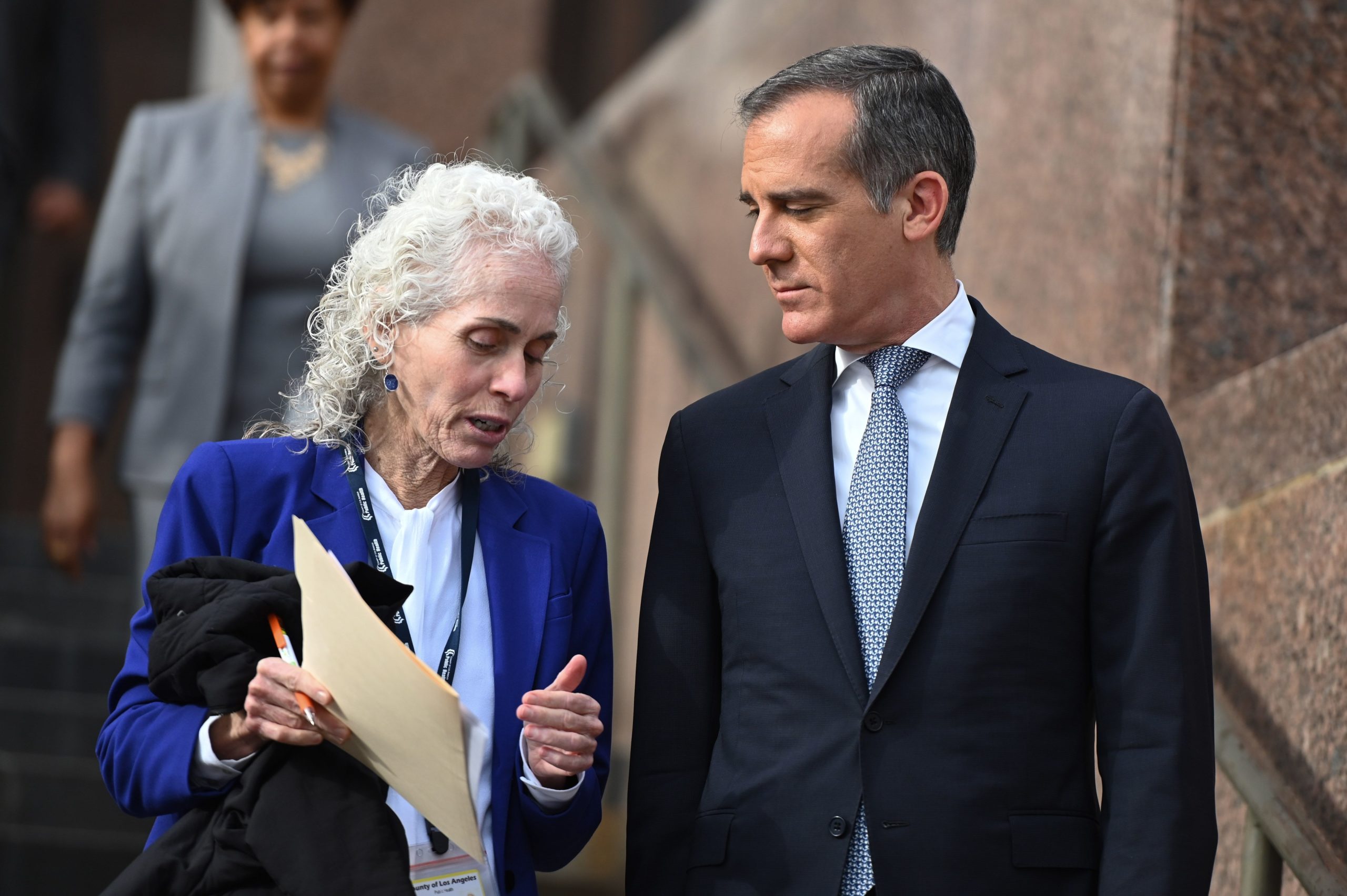 Los Angeles in the middle of January was a landscape of contradictions. To drive around the city and county was to toggle between the woeful and the mundane. Ambulance crews queued up in hospital emergency bays for hours waiting for spaces to open, while grieving families were turned away from mortuaries that didn’t have temporary containers large enough to accommodate the number of people who had died from COVID.

Yet in many areas of the sprawling county the mask of normalcy remained undisturbed. Adults with small children waited in line to browse in the Disney Store at the Glendale Galleria. “Disney’s always got a line out the door,” mused a masked vendor selling T-shirts at a nearby stall. Hundreds of cars were parked in the lot of the Citadel Outlets in Commerce; I watched a group of shoppers eat ice cream in line outside the Lululemon pop-up near posted notices ordering customers not to eat or drink anywhere on the premises.

Large chain stores in L.A. County, including 364 employees at nine Home Depots and 635 employees at 18 Targets, have seen major outbreaks accounting for hundreds of infections.

That particular week, on average, a new person in L.A. was succumbing to the deadly respiratory illness every six minutes. “Everyone wears masks and tries to keep a safe distance, but people are tired,” a jeweler said.

How much malls and retail stores specifically contributed to January’s exponential surge is hard to know – as is the extent of the damage that heedless shopping this winter continues to inflict on both consumers and retail employees. Even less clear are the reasons behind the decisions made by the Los Angeles County Department of Public Health (LAC DPH) to keep up a steady flow of consumers to retail — big box and mom and pop alike. The only certainty, according to some critics, is that the policy has been fatally flawed. (Pasadena and Long Beach are located in Los Angeles County but have their own independent health departments, which have mostly followed the county’s example on store closures.)

Large chain stores in L.A. County, including 364 employees at nine Home Depots and 635 employees at a total of 18 Targets, have seen major outbreaks accounting for hundreds of infections. And the Los Cerritos Center mall saw 49 staff members infected at three of its stores: Nordstrom, Amazon Books and Apple Los Cerritos. But retail establishments are one of many types of workplaces throughout the county hobbled by the uncontrolled spread of the virus — and LAC DPH officials haven’t released contact tracing data showing where they think transmissions have been occurring.

Eight percent of the people who contracted COVID-19 and who were employed at the time worked in retail, according to the Los Angeles Times, citing data provided by Dr. Jeffrey Gunzenhauser, the county’s chief medical officer. But that figure predates the full impact of the holiday shopping season on L.A.’s overwhelmed intensive care units and emergency departments. And the county health department was unable to provide more up-to-date figures. L.A. has seen a cumulative total of more than 1 million coronavirus infections since the start of the outbreak last March—with more than half of them reported since Black Friday.

LAC DPH never recommended for the Board of Supervisors to shut down malls and retail when new cases of the coronavirus began to rise exponentially in late October, nor did the board press the issue with health experts.

“Decisions about what to open and close during this hard period were complex and took many different factors into account,” an LAC DPH spokesperson said in a written statement. “We cannot say which specific things [led] to the surge but we do know it is better for people to wear cloth face coverings, stay six feet apart and limit exposures to household contacts when possible.”

Neither L.A. Mayor Eric Garcetti nor members of the L.A. City Council publicly advocated for a ban on in-store shopping during the busiest shopping time of the year. City officials have tended to defer to the state and county in matters of health since the start of the pandemic.

When malls and retail stores were closed during the early months of the pandemic, that meant there were fewer spaces for the virus to spread among people from separate households congregating in close proximity indoors. But as the pandemic wore on, and associated economic woes added up, the state and county loosened restrictions in a softer approach experts dubbed “stay-at-home lite.”

Indoor and outdoor shopping centers reopened for business at 50% capacity in late May. The cap was lowered to 25% of capacity in late October amid fears of an exponential growth in new cases, which quadrupled in the November ramp-up to the Christmas shopping season. Packed malls were one of many worrisome signs that people weren’t heeding the health order. The Friday before the Thanksgiving holiday was the busiest day at Los Angeles International Airport since the start of the pandemic.

“The county was . . . willing to accept a lower risk of spread in exchange for keeping stores open and keeping people employed and some sense of normalcy.”

“After Halloween, when we were getting into the winter holidays, things were heating up. We might have gained something if we had implemented tougher restrictions at that time,” said Angelo J. Bellomo, a former deputy director for LAC DPH who retired at the end of 2019.

Perhaps the most alarming contradiction between the dire warnings of health experts and the reckless disregard of COVID-weary Angelenos came on Black Friday, the day after Thanksgiving. At the Northridge Fashion Center, where 12 J.C. Penney employees later tested positive for COVID-19, shoppers stood shoulder to shoulder, sometimes for hours, like would-be nightclub patrons, waiting for a security guard to detach the velvet rope and wave them inside. Mark Morocco, a professor of emergency medicine at the University of California, Los Angeles, Medical Center, watched the mall footage on the TV news and called it “depressing.”

“The county was trying to achieve a balance,” Morocco said of October’s stay-at-home order limiting retailers to 25% capacity. “They were willing to accept a lower risk of spread in exchange for keeping stores open and keeping people employed and some sense of normalcy. Some of the stores enforced it aggressively. But malls are like little towns, and if they don’t enforce the order then it creates a funnel with a choke point of people who can’t get into the stores, and so they congregate in the outside parts of the mall, and I think that’s what you saw in all the videos.”

Los Angeles issued California’s most-restrictive stay-at-home order for residents one day after Thanksgiving — but retail remained open, albeit at a further-reduced 20% of capacity. County health inspectors cracked down on malls, but public health director Barbara Ferrer ruled out tougher restrictions on retail, saying it was already “much reduced” to 20% of capacity. The holiday shopping season pressed on, the curve of COVID infections shot up, and crowds remained steady if unspectacular.

“People are hungry for things in life that feel ‘normal,’” one mall executive told the Los Angeles Business Journal.

Health inspectors cited six malls for noncompliance with COVID safety protocols. The fine for each infraction was $500 – about the cost of a speeding ticket.

What more could public health agencies have done to enforce the mandates on masks and social distancing, or to create more powerful incentives to comply?

Tougher enforcement would have been a good place to start, said UCLA infectious disease specialist and epidemiologist Dr. Tim Brewer. On July 7, the Board of Supervisors had instructed public health director Barbara Ferrer to come up with an enforcement plan for local businesses that do not comply with the COVID infection controls. The board’s motion, co-authored by supervisors Sheila Kuehl and Janice Hahn, included language authorizing health officials to revoke a business permit as soon as the second visit from the department.

When Ferrer’s department rolled out the new enforcement plan in late August it included a range of penalties from $100 for the first offense to $500 and a 30-day permit suspension for multiple offenses. The permit includes businesses licensed and permitted by the health department and those that are not.

In between Black Friday and Christmas county health inspectors cited six malls, some of them more than once, for noncompliance with COVID safety protocols. The fine for each infraction was $500 – about the cost of a speeding ticket. The punishment did not escalate for repeat offenders.

“Five hundred dollars does not sound like much of a deterrent to me for a mall the size of the Grove,” Brewer said, referring to developer Rick Caruso’s Fairfax District shopping megaplex. The Grove was fined $500 on Dec. 7 and again on Dec. 10 for violations related to onsite dining and customer face coverings, county records show. Craig Realty’s Citadel Outlets was fined $500 on four separate occasions between Nov. 29 and Dec. 12, for violations including “no monitoring of occupancy.”

L.A. County has issued 421 citations to businesses since Dec. 1. “If the public health departments were serious, they could have closed the malls that violated the order,” Brewer said. “That would have probably been a very effective deterrent.”

By the middle of January, as local hospitals were running out of both beds and vaccines, Los Angeles Mayor Garcetti announced he would support tougher new measures on indoor malls and retail then being mulled by county health officials. The county’s governing board of supervisors also discussed such possibilities on Jan. 15, but postponed a decision. But public health experts say the disease has become so widespread that such clamp-downs may now be too late to make a significant dent in the problem.

“If state and county officials intervened earlier on when there were relatively fewer cases we might have had a bigger return on the investment, so to speak,” said Angelo Bellomo. “Once the infection is so widespread among the population, the point is reached when you can’t do much to control it and the shift is to treat or vaccinate, and concentrate your efforts on protecting those who are most vulnerable.”