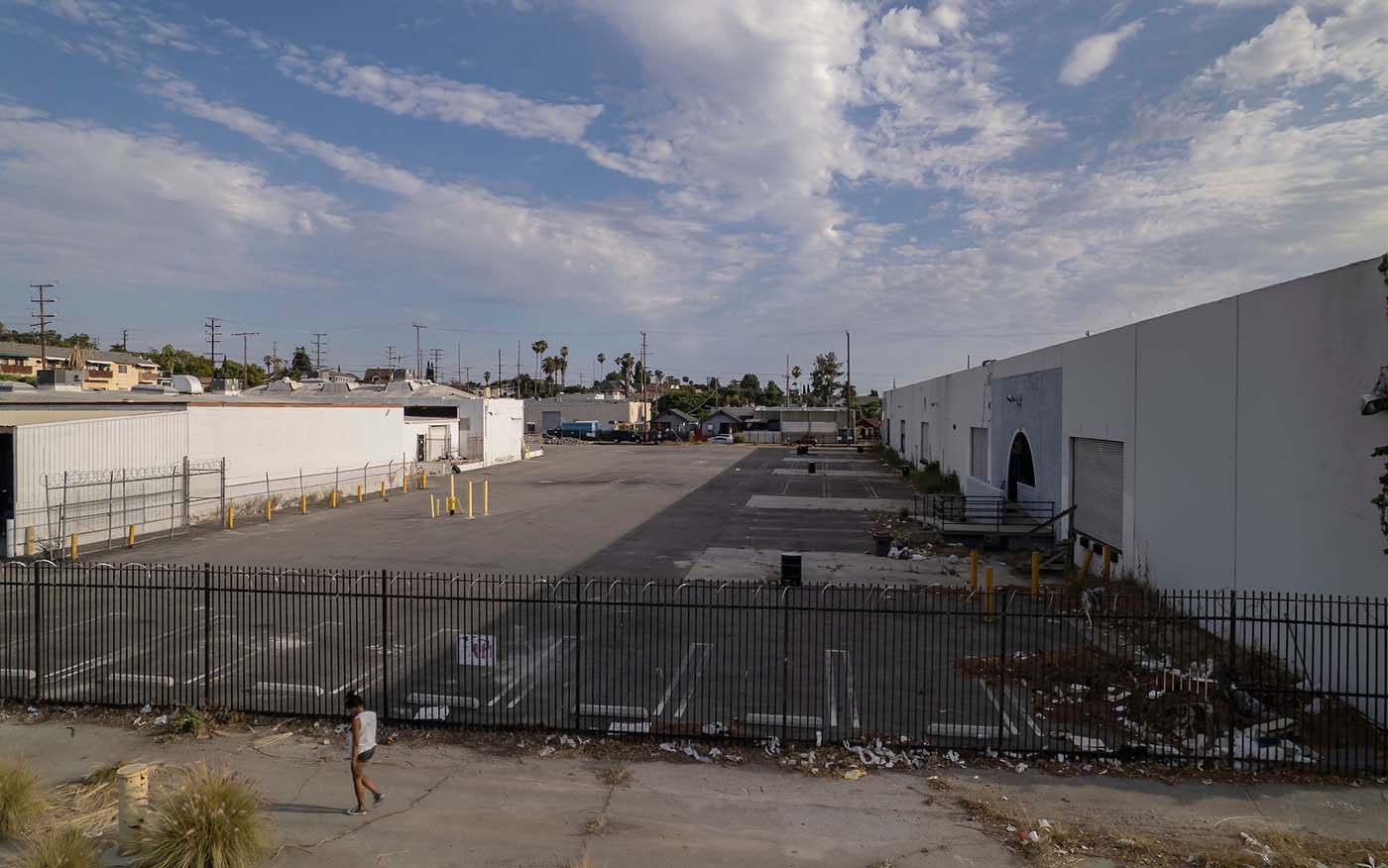 The site of the planned Avenue 34 Project development in the Lincoln Heights neighborhood of Los Angeles. Photo: Ted Soqui.

Amateur sleuthing has unearthed archival records from the 1980s showing how the site of a proposed housing development in Lincoln Heights, north of Downtown Los Angeles, immediately abuts the location of a massive illegal hazardous waste dump that led to a milestone prosecution in California.

The findings raise questions anew about plans to remediate the property, the Department of Toxic Substances Control’s regulatory oversight of the project and how important information might have been hidden from a largely low income community already highly distrustful of the planned development.

A landmark investigation in 1984 found that employees from the American Caster Corporation had buried 252 barrels of toxic waste across a strip of land immediately neighboring the five-acre site.

According to online database records, a landmark investigation by the Los Angeles District Attorney’s office in 1984 found that employees from the American Caster Corporation had buried 252 barrels of toxic waste — many of them highly corroded and leaking by the time they were removed — in “cavernous holes” across a strip of land immediately neighboring the five-acre site now earmarked for the Avenue 34 Project, a 468-unit apartment complex.

These records only recently surfaced, however, because of a local resident who conducted an online archival search of the Los Angeles Times and other newspapers. None of the key documents on the DTSC’s public EnviroStor database — those that typically list information on hazardous waste releases — mention the site’s history as an illegal waste dump. Multiple environmental reviews authorized by the site owners over years also fail to mention it. A 2019 mixed-use project report states “there are no reported spills, releases, or violations” associated with the site adjacent to where the 252 barrels of toxic waste were illegally dumped in the early 1980s. “[B]ased on the available information,” the report declares, “the listings do not represent a significant environmental concern.”

In response to questions concerning what the Los Angeles City Planning Department knew about the illegal waste disposal, a spokesperson pointed to a 2017 report that forms part of the project’s environmental review process. That report found “no indication from a review of regulatory records and a Project Site inspection that the Project Site has had any problems concerning the storage, usage or disposal of hazardous materials in relation to these properties.”

According to L.A. Times stories from 1984, authorities conducted a “speedy cleanup” of the site in less than a day, removing barrels and contaminated soils before taking them to a hazardous waste landfill in West Covina.

“The consequences of this illegal dumping are not adequately understood.”

Local residents are now worried that a draft removal action workplan to safely manage soil excavations during construction — the public comment period deadline for which is Dec. 20 — doesn’t take into account the full risks that the site’s toxic history could pose to workers and the community. The draft workplan doesn’t mention the illegal toxic waste dump, though it mentions the site’s other industrial and residential uses from as far back as the late 1800s.

According to Jim Wells, a professional geologist with the firm L. Everett & Associates, more extensive site investigations need to take place before the project should move forward. “The consequences of this illegal dumping are not adequately understood,” he said.

The DTSC failed to respond to multiple emailed questions about its knowledge of the illegal toxic dump and possible ramifications for the redevelopment moving forward.

The current owners of the site are listed as R Cap Avenue 34, LLC and R Cap Avenue Two, LLC, companies affiliated with the Ratners, a powerful family in the real estate industry in Cleveland and Denver, as well as Los Angeles. The site’s previous owner is listed as Eric Ortiz.

In a statement attributed to the “Avenue 34 Development Team,” the developers wrote that they are “currently working under the oversight of the State Department of Toxic Substances Control to develop a comprehensive remediation plan.” Soil sampling conducted thus far has uncovered elevated contamination levels at the site.

The statement added that the development team is “both committed and legally required to ensure this site is fully cleaned up in accordance with today’s strict environmental standards.”

Most of the 52-gallon barrels, which held a highly toxic soup of chemicals including xylene and toluene, contained less than five gallons of waste by the time they were hauled away.

According to archival newspaper records, American Caster Corporation employees buried the drums over the course of four years, also allegedly pouring toxic waste directly into the city sewer system. Most of the 52-gallon barrels, which held a highly toxic soup of chemicals including xylene and toluene, contained less than five gallons of waste by the time they were hauled away, according to reports. The company’s president and vice president were both handed fines and six-month prison sentences, and the company was ordered to run a $15,000 advertisement in the Times relaying news of the crimes.

The punishments handed down in the case, led by the Los Angeles Hazardous Waste Strike Force, constituted California’s first prison sentences for industrial polluters, according to an L.A. Times article from March 1985.

Councilmember Gil Cedillo filed a motion in April — one ultimately tabled — to provide the proposed development up to $105 million in tax-exempt bond funding. In an emailed response to questions,  spokesman Conrado TerrazasCross wrote that while Cedillo was “not aware” of the illegal toxic dump,“He would have disclosed his knowledge of this incident to the public,” if he had.

This marks the latest twist in the tale of the proposed Avenue 34 redevelopment project, which immediately abuts residences and an elementary school in one of the most environmentally burdened areas in the state. Local community members and environmental advocates strongly insist that had it not been for the concerted pressure they have placed on the DTSC — the state agency that signs off on the building permit — the project would have already broken ground.

The DTSC is also coming under pressure from local politicians. In a letter Thursday to the agency, L.A. County Supervisor Hilda Solis, in whose district Lincoln Heights sits, expressed “deep concerns” over the adequacy of the draft work plan, writing that “insufficient consideration” has been paid to the potential migration of pollution underneath surrounding homes, schools and businesses.

“These developers lied about the contamination for more than a year and were prepared to build hundreds of homes on top of a toxic waste dump without addressing this history,” wrote local resident Michael Hayden in a statement. He pointed to an FAQ on the project’s website as recently as October of last year stating that the site is “not” contaminated. “Anyone who helped cover up this history must be held accountable.”