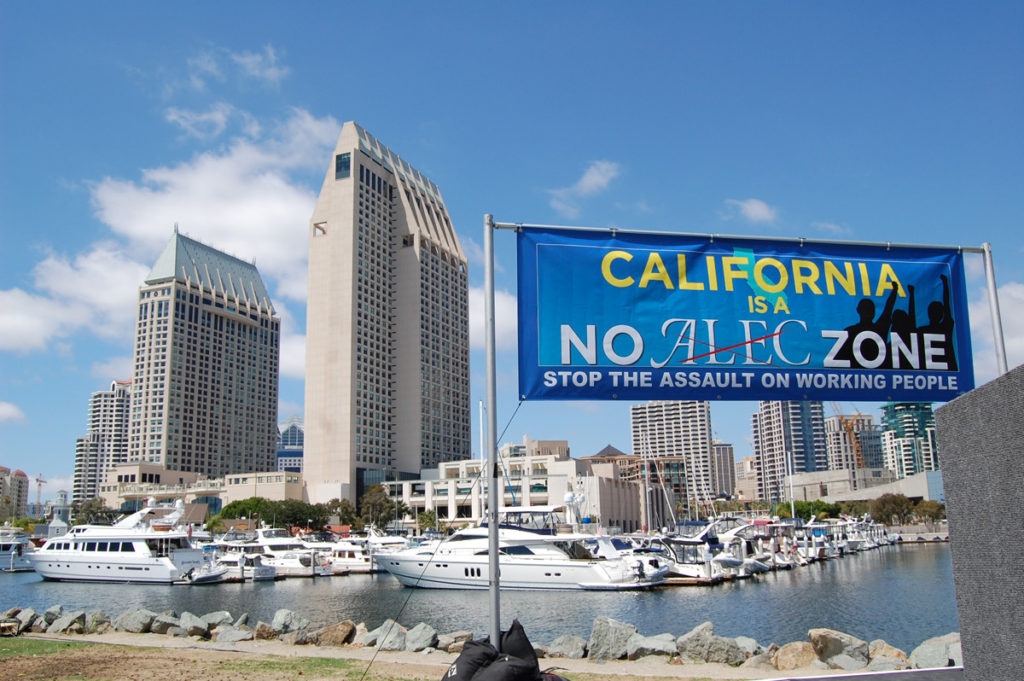 As lobbyists and state legislators gathered at San Diego’s Grand Hyatt resort last week for the three-day annual meeting of the American Legislative Exchange Council (ALEC), the delegates seemed to barely glance at the several dozen exhibitor tables that made up a sort of carnival sideshow of right-wing groups outside the hotel’s second-floor warren of meeting rooms.

Convention attendees had more pressing concerns. Namely, turning this year’s corporate wish list into the infamous boilerplate bills known as “model laws” that would aspire to undermine things like health and environmental standards, worker rights, campaign-spending limits and implementation of the Affordable Care Act (ACA) across the 50 states.

Many of the exhibitor booths were occupied by familiar ALEC friends, such as the collection of extreme-right think tanks known as the State Policy Network, which churns out studies designed to grease the model laws’ passage out of statehouse committees. It includes groups like climate-deniers the Heartland Institute; anti-immigrant and privatization enthusiasts the Heritage Foundation; and the San Francisco-based ACA haters California Policy Institute.

Tucked around the corner, however, was an unassuming and unmanned booth that, although less familiar, was promoting what may be the most extreme, chillingly ambitious and potentially far-reaching ALEC initiative yet imagined — an attempt to trigger Article V of the United States Constitution in a historically unprecedented call for a national convention of states to amend the foundational document that is the supreme law of our land.

And that prospect, labor economist and veteran ALEC-watcher Jane Carter told Capital & Main on the final day of the meeting, is “terrifying. Carter, who fights attempts to privatize public services for the American Federation of State, County, and Municipal Employees (AFSCME), had come to town to help organize a march last Wednesday. That afternoon, 3000 Southern California union members and San Diego progressives sent conventioneers scurrying into the Hyatt for cover when the demonstrators rallied in front of the hotel and defiantly declared California a “No ALEC zone.”

“A constitutional convention could open the floodgates to destroying the Constitution in and of itself,” Carter explained, “and they’re this close to getting it done. I mean it’s just a matter of getting a few more states on board.”

It requires 34 states to trigger a convention, but it turns out that application bills — ostensibly to frame a balanced budget amendment — have already been passed by 27 state legislatures. In the wake of sweeping Democratic losses during the 2014 election cycle, however, the seven additional states that must sign off on a convention is a harrowingly thin line.

What Carter most fears is that it could come out as the United States of ALEC, and that some of the most egregious model laws that she’s fought over the years could be reborn in a post-convention Constitution as enumerated corporate rights.

One of the most surreal was a Kansas privatization law called the “Yellow Pages Bill” that was pushed through when she was director of the Kansas Organization of State Employees (KOSE) in Topeka.

“If you can open the yellow pages,” Carter explained, “and find a company that provides a service that the state is currently providing, [because the law holds] there should not be competition between the two of them, it [is] privatized.”

The phone book is actually cracked behind closed doors by an appointed commission in a process that the law exempts from open-records acts or open-meetings acts. Companies that successfully sue a government agency are awarded both the contract for the so-called “dual service” as well as its legal costs in bringing the case to trial, which is billed to Kansas taxpayers.

“It’s an outrageous bill, where it was just basically handing over public-sector services to a private company, and then making the public pay that company to take them over,” Carter said. And while ALEC didn’t write the Kansas version, Yellow Pages was quickly adopted as a model bill and has since been introduced in Michigan.

It is local communities that bear the financial brunt of such laws, Carter noted. Though ALEC touts them as a means of making public services more efficient (“10, 20, 30 percent more,” ALEC economist Stephen Moore boasted at a Friday keynote talk), in ALEC-speak, “efficiency” decodes as the profits reaped by the privatizer after replacing the unionized government employees with low-paid private workers.

“When you take a good middle-class job with a small pension and decent benefits,” Carter said, “and you privatize that to a … job with no benefits, no nothing except a minimum wage, you significantly harm the local economy. It’s plain and simple. The only way that company is going to make a profit is not by cleaning a school better, … the only way that company does that job cheaper is because they slash the wages of the workers.“

Another nightmare scenario is what the Constitution would look like after the privatized education industry was done with it. A glimmering came in June when Nevada effectively signed the death warrant for its public education system by adopting a radical school choice law. Beginning next year, the state will transform its $2.8 billion public school budget into a kind of universal credit card that will allow the state’s 450,000 K-12 public school children to freely spend taxpayer money on private and religious school tuitions.

And though the law was sponsored by the education foundation created by Republican ex-Florida governor Jeb Bush, Carter noted that ALEC has been pushing privatized education for years. On Thursday, ALEC delegates cheered one of the bill’s supporters, Nevada assembly Republican Melissa Woodbury, at a San Diego policy workshop on high-stakes assessment test standards.

Carter added that the Nevada law is in line with a recent shift in the privatization movement away from targeting low-income schools for charter conversion.

“Now they realize, ‘Oh, that’s failing,’” she said. “Because they’ve realized that all of these charter school bills they’ve written, introduced and passed, and all these charter schools for low-income students that are up and running, so to speak, … aren’t working. So now they’re going after middle-income earners.” 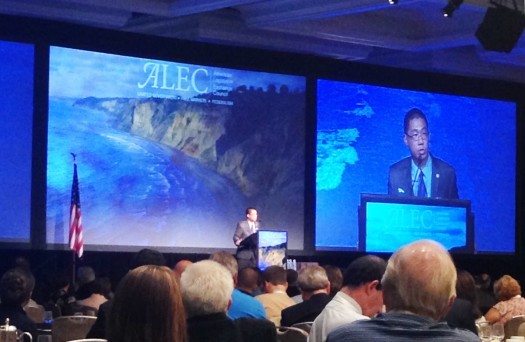 Even if a Constitutional convention remains nothing more than a libertarian dream for now, Carter says that the San Diego convention demonstrated that ALEC has lost none of its venom. Of particular concern to her is its newest, more localized arm, the American City County Exchange (ACCE), which retargets ALEC laws at the municipal and county levels through so-called preemption legislation. Those bills override local controls on everything from fracking bans to Living Wage ordinances, while curiously allowing localities to pass city and county right-to-work measures.

“It’s a very negative kind of [approach],” she said. “Preemption laws would allow no plastic bag bans, no raises to minimum wage, no paid sick days, no earned benefits and no rights for workers. They want to prohibit municipalities and counties from banning [bad things] or doing these really great things, but it’s okay for them to pass right-to-work. So it’s local control, but only the way [they] want it.”

One victory that Carter spotted in San Diego this year was ironically the presence of ALEC’s new 501 (c)(4) lobbying entity known as the Jeffersonian Project. Previously, ALEC had been operating under the cover of a 501(c)(3), as an educational nonprofit. But its practice of subsidizing convention and travel costs for legislators and their families with the $50,000 it charges its corporate members drew several lawsuits last year. And though ALEC steadfastly denied the violations, Carter sees the Jeffersonian Project as a vindication.

“It shows that corporations can’t just play by their own rules,” she said. “[ALEC has] been around for 42 years, and folks are finally realizing how wrong democracy behind a swanky hotel room closed-door meeting is. That’s inspiring to me. I don’t think ALEC will ever go away. But people are standing up and saying, ‘No. This is not good.’”