Last October a representative of the Walmart Foundation headlined a workshop entitled “The Just Transition” at a conference focused on corporate responsibility in Huntington Beach, California.

Julie Gehrki, the foundation’s vice president of programs, was optimistic about the future of a retail workforce that faces automation and has been beset by store closures. She touted Walmart’s recent investment in training academies and efforts to incorporate virtual reality into training workers to be battle-ready for Black Friday.

About three months after the conference, Walmart’s Sam’s Club chain announced it would close 63 stores, including three in hurricane-ravaged Puerto Rico.

The retail chain’s laying off of about 10,000 workers was prompted by a new plan to target a wealthier demographic—families with annual incomes of between $75,000 and $125,000, Sam’s Club CEO John Furner told the Wall Street Journal in late January.

“The strategy isn’t to close clubs,” he said. “The strategy is to transform the business.” About a dozen locations are expected to be converted into “eCommerce fulfillment centers” to better serve the growing number of customers shopping online. 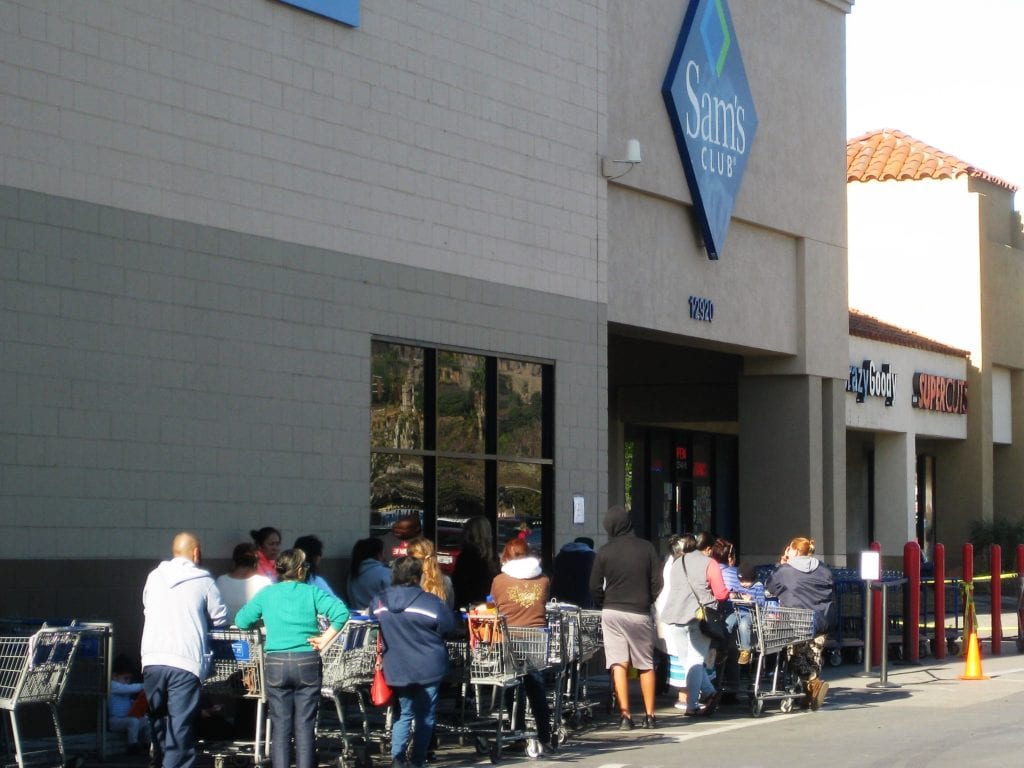 Was this the “Just Transition” envisioned by Canadian labor activist Brian Kohler, who coined the phrase in 1998? Mass layoffs are never pleasant news, and American-style mass layoffs can be particularly disruptive, given a safety net that’s meager, relative to some other industrialized countries, and employers’ minimal legal responsibilities to affected workers.

The layoff news arrived  the same day Sam’s Club announced a plan to raise hourly wages for new employees from $10 to $11 and to expand other benefits.

The Sam’s Club layoffs were no exception to that disruption, according to workers who seemed shaken by the sudden news. But because the membership-only warehouse chain employs so many workers, it triggered a decades-old plant-closing law that provides an important protection to some U.S. workers, labor advocates say. In addition, Sam’s Club says it will provide severance to long-term and full-time employees who qualify.

The layoff news arrived January 11, the same day the company announced a plan to raise hourly wages for new employees from $10 to $11, expand maternity and parental leave benefits, and offer one-time bonuses to eligible workers.

That was small comfort to employees across the country who learned about the closure by phone, email, in store meetings, by FedEx and sometimes, according to news reports, via a locked door.

At the Sam’s Club in the city of San Fernando, a working-class Los Angeles suburb, an overnight associate who only gave his name as Rudy sat outside at metal tables.

The store would be closing for good in three days, and a line of about 60 waiting customers—some wrapped in blankets—had started to form along the warehouse store’s wall and back toward a Home Depot at 6 a.m.

On break, Rudy munched on crackers and sipped soda with a co-worker. “They didn’t give us enough time,” he said. “It was all of a sudden.” Rudy is 50, a perilous age to be out of work. A 10-year Sam’s Club veteran and father of two teens, he is the sole breadwinner for his family.

Later in the morning, two blue-vested Walmart representatives headed into the Sam’s Club to participate in a job fair. The two women said the jobs on offer were all part-time. 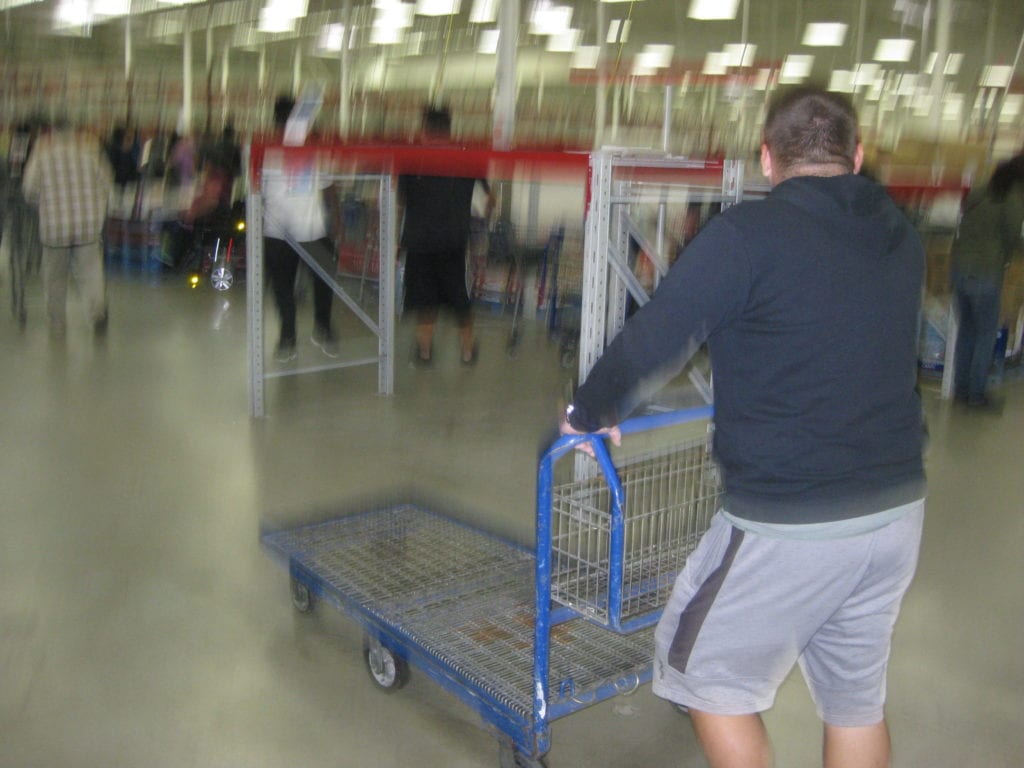 “We’re sad, but you have to continue,” said Juan Casada, a supervisor and another 10-year veteran, pausing for a moment on his way through the parking lot. Casada complained, too, about the short notice and the job fair’s minimal offerings.

A few yards away, Sam’s Club shopper Ricky Crouch, who had two infants at home, waited patiently in line along with the other deal-seeking customers. He’d come in search of baby wipes at rock-bottom prices. Crouch lamented the store’s impending closure but consoled himself that he still had Costco two miles away from the San Fernando Sam’s Club, and Walmart, a seven-mile jaunt, as shopping options.

Sam’s Club’s employees will get paychecks until mid-March, thanks to the 1988 Worker Adjustment Retraining and Notification Act, a key protection for U.S. workers subjected to mass layoffs. A January 11 letter from Sam’s Club to San Fernando’s mayor cites the WARN Act in its subject line and provides information about all the occupations of the 178 displaced employees. The federal law requires large employers to provide 60-days of notice to workers and local government in advance of mass layoffs.

According to the letter, hourly employees would not be officially terminated until March 16, and managers were given yet another month of official employment.

“It’s a good law,” says Nicholas de Blouw, a California employment attorney, who points out that the WARN Act also provides protections for less densely populated areas of the country that may be heavily reliant on large employers, their services or sales taxes. (The Naperville, Illinois store, for example, provided $1 million in annual sales tax to the city, according to the Chicago Tribune.)

The act “is meant to protect employees and their families and really sometimes the community as a whole,” de Blouw said.

“Associates with one to three years of continuous service will receive three weeks of pay and one week of pay for every additional year of service,” Laura Ladd Poff, a Sam’s Club representative, wrote in an email.

The company is also providing severance to laid-off part-time workers “who have been with the company for five continuous years and have not secured another position within the company.”

The company has held job fairs with local economic-assistance agencies. “We know this is difficult news for our associates and we are working to place as many of them as possible at nearby locations,” Sam’s Club’s Furner said in a statement.

Jobs at Sam’s Club tend to be better paid than those at Walmart, which are increasingly part time, according to Dan Schlademan, a spokesman for OUR (Organization United for Respect), which advocates for current and former Walmart employees. OUR has been holding workshops on the WARN Act for laid-off Sam’s Club workers. At the October Huntington Beach workshop on “The Just Transition,” moderator Susan Winterberg floated another approach to mass layoffs, in which companies consult with unions and local government in advance, and create a layoff plan with workers’ representatives.

Winterberg, who works for BSR (formerly Businesses for Social Responsibility), distributed a two-page handout to the 40 or so attendees, illustrating contrasting approaches to layoffs. During four decades of Rust Belt decline, for example, workers “frequently learn[ed] about their layoff on the same day.” However, the tech firm Nokia used a different approach to laying off 18,000 people as it lost market share to Apple and Samsung.

Nokia, which is headquartered in Finland, was required to consult with unions and local governments to create a transition plan that resulted in a €50 million ($61.3 million) assistance package, three to 18 months of notice, career fairs, grants for volunteering or sabbaticals, and a start-up fund for new businesses.

But such an approach to labor relations is not necessarily forged at a corporate conference workshop. In Europe, “in many cases, the worker owns the job, and firms negotiate with their workers’ committee when layoffs are necessary,” according to Franco-American business professor Michael Segalla, who teaches at HEC Paris School of Management (Ecole des Hautes Etudes Commerciales de Paris). In France, where workers are much more militant, the terms of large-scale layoffs “almost always need the approval of regional or national governmental entities,” he adds.

U.S. workers, meanwhile, have the WARN Act, which may not be helpful for those employed in smaller stores. Also, American workers can access assistance from local workforce development agencies. Typically, at least 50 employees must be laid off to trigger the WARN Act.

That’s not to say employers shutting down a smaller location cannot provide severance, assistance or notice or all three, but it’s at their discretion, and information about the layoffs may be harder to come by.

A giant like Walmart, which employs 1.5 million workers in the U.S., is perpetually opening and closing stores. Just a year ago, Walmart announced plans to close 269 stores globally and eliminate some 10,000 jobs in the United States, including all of those in its small-format Express stores, even as it planned to open scores more supercenters and neighborhood markets. As with the recent Sam’s Club layoff, workers not hired by nearby locations would get 60 days pay and severance if eligible, according to Business Insider. De Blouw, the employment attorney, says that workers should always talk to a lawyer before they sign a severance agreement, which typically requires them to waive their right to sue the company. To determine whether a company is complying with the WARN Act also requires a “case by case” analysis, and employees may have other reasons not sign away those rights.

“You always, always, always want to contact an attorney to get some legal advice as to whether or not you should sign” a severance agreement, de Blouw said.

Several workers at the San Fernando store said they had signed a confidentiality agreement that prevented them from talking to a reporter.

Alex Vega, 28, is a former Sam’s Club employee in Naperville, Illinois. He was displaced in the recent layoff but says he does not remember seeing a non-disclosure agreement. Vega described chaotic days following news of the closure when information was “scarce” at his store and “managers were almost nowhere in sight.”

“I’m pretty inexperienced,” he said. “I might have skimmed over that.”