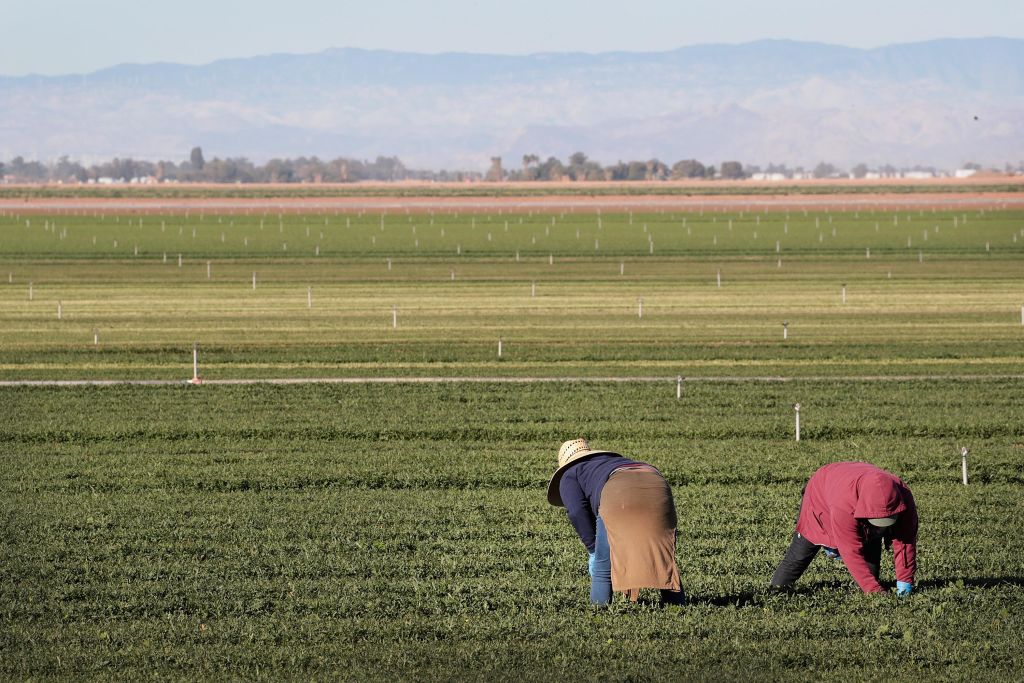 On Sunday of Labor Day weekend, President Biden took the unusual step of endorsing a California bill, the Agricultural Labor Relations Voting Choice Act (AB 2183), which is currently at Gov. Newsom’s desk awaiting either his signature or veto. “In the state with the largest population of farmworkers, the least we owe them is an easier path to make a free and fair choice to organize a union,” Biden stated in the release.

Last year, Newsom vetoed an earlier version of the bill, which would make it easier for farmworkers to unionize and is backed by the United Farm Workers (UFW). The governor cited “various inconsistencies and procedural issues related to the collection and review of ballot cards.”

In August, farmworkers and supporters marched more than 300 miles in support of the legislation, holding vigils in various cities and culminating in a rally at the state Capitol in Sacramento.

Union leaders argue that the bill, which would allow workers to form unions either through mail-in ballots or when a majority sign documents in support of unionization, is needed to provide extra protection for farmworkers, whom they say can be targets of intimidation and threats of deportation during elections held at the work site. Such elections are overseen by the California Agricultural Labor Relations Board.

The mail-in ballot scenario, which has received the lion’s share of media coverage, occurs when growers have attested that they will remain neutral in an organizing drive. These growers will agree to a host of conditions, such as allowing union organizers into the fields and not holding captive audience meetings or disparaging the union. Under these conditions, workers can request and return ballots to the ALRB before the union files for an official election. Once the union files an election petition, the ALRB would mail ballots to any workers on the payroll who had not yet requested one and tally the votes.

“Every time you set a worker in a position to experience immigration-based retaliation, it obviously has an unbelievable chilling effect.”

Farmworkers with employers who do not agree to these “labor peace” measures, by contrast, will be able to join a union by submitting a majority of signatures in support of unionization. This second procedure, often called card check, is already available to the state’s public sector employees.

According to Stone’s office, the main point of contention raised by Newsom has to do with notifying employers about union activity in the first scenario, when a grower has pledged neutrality. In the bill, the grower will officially learn of the union drive when the union files paperwork with the ALRB, either to petition for an election or for related issues, such as receiving permission to enter the fields during nonwork hours to talk to workers. Newsom is pushing for employers to be notified earlier, perhaps, for example, when the first worker at a company requests a ballot.

For the union, earlier notification is a nonstarter. “We have absolutely seen growers who work very hard to have worker leaders deported,” said UFW spokesperson Elizabeth Strater. “Every time you set a worker in a position to experience immigration-based retaliation, it obviously has an unbelievable chilling effect.” A representative for Stone told Capital & Main that the threat of intimidation or deportation still remained despite the fact that growers in this scenario had already pledged to remain neutral, and Stone’s spokesman saw the lack of early notification as a safeguard to ensure neutrality.

Newsom’s office didn’t respond to a request for comment about why growers who had pledged neutrality would need to be notified about union activity, but a spokesman recently told the Fresno Bee that Newsom wants to follow the model provided by the National Labor Relations Board, in which a specific period of voting by mail is announced to workers and employers alike.

In fact, the sticking point over the legislation regarding mail-ballot elections may be mostly theoretical. The mail-in ballot scenario depends, first, on growers voluntarily attesting publicly that in any possible future union drive they will remain neutral. That the same growers who have strongly opposed the bill would then turn around and signal their willingness to welcome union organizers into their fields seems dubious. Also unlikely is that a union could launch an organizing campaign in the fields — where very few farmworkers are unionized and union drives are rare — without it soon becoming known to the employer.

Since launching his first campaign for governor, Newsom has received donations totaling $977,598 from the agricultural industry.

If growers balk at neutrality, then the shift in the fields would be to a card check system, in which the state would certify the union once a majority of workers have signed documents in support. This has long been a goal of organized labor, which it argues levels the playing field by making it more difficult for employers to coerce, intimidate and fire workers in the frenzied run up to an election. A 2019 report by the Economic Policy Institute, a liberal think tank, found that employers were charged with violating federal law in 41.5% of union elections held during 2016 and 2017, and that in one-fifth of the elections the charges included illegally firing workers.

On the federal level, the Employee Free Choice Act would have mandated that unions be recognized once a majority of workers signed cards seeking representation. Though the bill was defeated in 2009, numerous states, including California, enforce card check unionization among public sector workers, while employers in the private sector sometimes voluntarily agree to its use.

Since launching his first campaign for governor, Newsom, who co-founded a winery in Napa, has received donations totaling $977,598 from the agricultural industry, according to Open Secrets, a transparency group that tracks money in politics. That figure doesn’t include funds raised to fight his recall, which included $250,000 from Stewart and Lynda Resnick, billionaire agribusiness owners of the Wonderful Company.

On Labor Day, Newsom signed another union-sponsored bill, AB 287, which created a council to set wages and improve working conditions for fast-food workers. The bill was forcefully opposed by the fast food industry, with the president of McDonald’s USA warning that it was a “cautionary tale” that “hurts everyone” and the head of the California Restaurant Association calling it “a direct assault on tested, effective governance.”

The opposition to the farmworker bill has also been heated, including, again, from the California Restaurant Association and powerful agricultural groups like the California Farm Bureau and Western Growers, who argue that its sole purpose is “thwarting the secret ballot election process.” The California Chamber of Commerce has weighed in as well, calling it a “job killer bill.”

Newsom has until Sept. 30 to either sign or veto the farmworker bill.