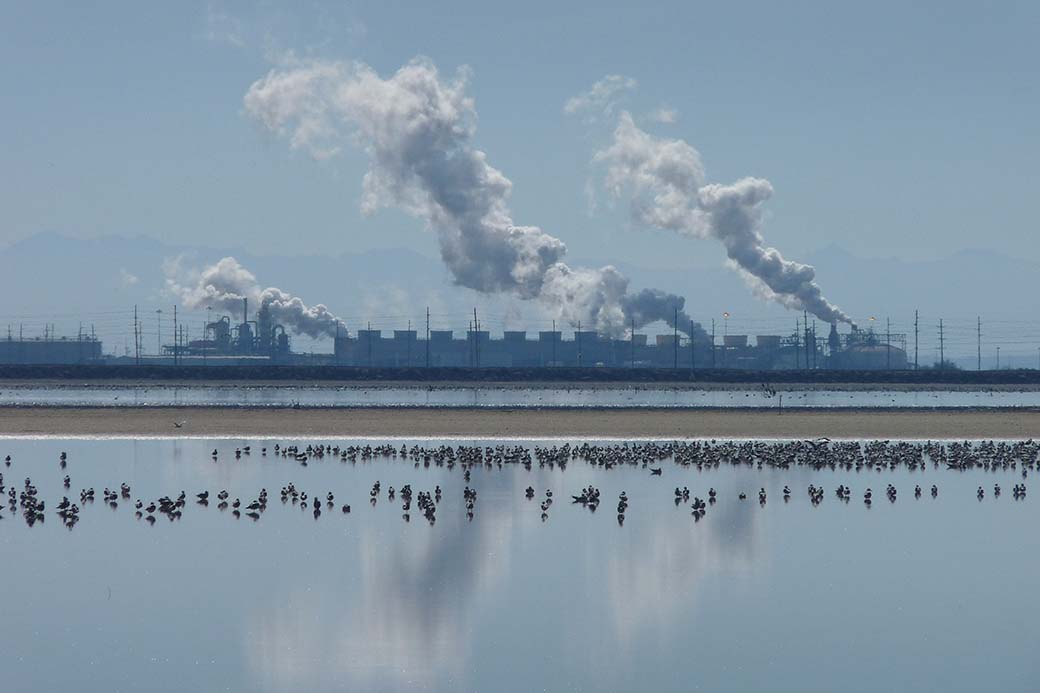 A geothermal power plant at the Salton Sea in the Imperial Valley of California. Photo: Hart Walter.

Its proximity to the Salton Sea has shaped the destiny of the Imperial Valley in countless ways. Word these days is that lithium buried deep beneath the waters is the key to a prosperous future, the elixir that will transform an area plagued by high unemployment and rampant respiratory diseases.

“We’re almost like in heaven when it comes to lithium extraction,” Imperial County Supervisor Jesus Eduardo Escobar told a Scripps correspondent. “You’re looking at anywhere from $500 billion to a trillion [dollars], as far as the net value of that lithium that we have here in Imperial County.”

“We start with changing the economic base of Imperial Valley and turning it into a global beacon for lithium production, battery storage and the future of the economy of California,” Lithium Valley Commissioner Thomas Soto said at a recent meeting.

Not surprisingly, many locals are wary that converting their community into the so-called Lithium Valley is the solution to their problems.

“Who in Salton Sea Basin will be able to live in this toxic dust bowl that is going to consume everything in the area?” Salton Sea resident Art Gertz asked during a Lithium Valley Commission meeting last month. “Lithium is great, we hope it does wonderful things. We’re hearing lots of wonderful things, but until we take care of the bigger problem in concert, how are we going to reap the benefits in the long term?”

Authorized by state legislation AB 1657, the Lithium Valley Commission (which has 14 members) has been meeting virtually for a little over a year, gathering and analyzing information about lithium extraction and how it will affect the region. The area near the Salton Sea has a rich supply, needed for electric vehicles and cell phones. The United States currently relies on other countries for lithium; extracting it in California could change that.

In a report due by Oct. 1, the commission is expected to assess everything from the potential benefits of extracting lithium using existing geothermal facilities on the Salton Sea to the environmental safety of extraction methods.

Engagement has been so minimal that many locals don’t even know that their valley is home to a mineral that’s in high demand as a component of lithium-ion batteries.

Notably, the commission is not charged with gathering any public input for their project.

The bill establishing the commission only states that members “may take public input for recommendations on the issues.” Nevertheless, some commission members, among them community activists and public health specialists, have made clear their opinions that public engagement and input should be a crucial component of their assessment, given the potential impact on surrounding communities.

Yet such engagement has been so minimal that many locals don’t even know that their valley is home to an element that’s in high demand as a component of lithium-ion batteries, an alternative to fossil fuels, much less that a commission exists to help establish a Lithium Valley.

“A mine? Oh, another project at the lake? They’re always doing studies there,” said Romero Gonzales, as he exited El Sol Market in Brawley.

“I think I read something about it a few weeks ago, but I couldn’t tell you any details. I don’t know when or where,” said Lori Jones, who added that she can afford to buy the Imperial Valley Press newspaper from a newspaper rack only twice a week.

“No, I had no idea that they are going to be setting up a mine,” said Rosa Maria Sevilla as she waited for the bus near Brawley City Hall last week. She squinted at a small diagram on a phone illustrating the process of mining the lithium from brine. “Is it all going to be done by machine or are there going to be jobs?”

For many in Brawley, the third-largest city in the Imperial Valley with a population of about 26,000, the key question is whether the economically depressed region will benefit financially. Estimates show the possibility of up to 800 new jobs by 2028, according to information gathered by the Lithium Valley Commission.

The poverty rate in Imperial County is the third highest in the state, per 2021 numbers released by the U.S. Census Bureau. The unemployment rate in Imperial County was 14% in February, much less than the May 2020 high of 28%, according to the state Employment Development Department. However, that rate doesn’t compare favorably to the February unemployment rate of 5.4% for California and 3.8% for the United States.

And those that do have jobs in agriculture or government are not earning a lot, with per capita incomes at about $18,000, according to 2021 Census figures.

Investment in the area is sorely needed.

“Often, we can’t go outside. Or we have headaches and nosebleeds that don’t stop easily.”

Newcomers driving on Brawley’s Main Street past City Hall may feel like they’re taking a trip back in time, as the architecture downtown harkens back to a different era. Business names in English and Spanish are a testament to the region’s proximity to the U.S.-Mexico border and its 85% Latino population.

At Brownie’s Diner, an eatery popular with locals, a hearty plate of menudo is a popular daily offering, and the walls are decorated with movie posters such as Casablanca and Pulp Fiction and black-and-white glossies of celebrities and locals.

Pictures of the same downtown street through the decades show the buildings looking exactly the same in the 1940s and 1960s as they do today. The only difference is the make and models of the cars. One wall features a collection of class pictures, including one from 1961 that shows the area has been home to a predominantly Latino community for decades. The name “Fr. Eddie Ruiz,” a local Catholic priest, is written underneath the picture of a boy in Mr. Payne’s fifth-grade class in Hidalgo School.

Some residents dream of leaving the area, going as far as researching rents and home prices in other locations only to realize they can’t afford to live elsewhere. Others are reluctant to leave their relatives who live nearby south of the border, which is only about 20 minutes away.

The Salton Sea is also a short drive from Brawley, running parallel to Highway 86, where small billboards advertise plots of land. Close to the lake, a putrid smell permeates the air, and dust blurs the arid landscape.

California’s largest lake was once home to a flourishing bird population and one of the most productive fisheries in the world, reportedly drawing more visitors than Yosemite National Park. Unfortunately, the lake has also been a repository of irrigation runoff from the area’s thriving agriculture industry. And the 2003 Quantification Settlement Agreement that was intended to wean the area from dependence on the Colorado River has meant diverting water from the lake to other areas.

The Salton Sea now sits in silent accusation of policymakers who’ve been slow to deliver on promises to mitigate damaging effects from the shrinking lake. People haven’t fared much better than the birds. As the lake dries up, its increasing salinity poisons the air and emits what scientists believe to be greenhouse gasses and toxins that are sickening nearby communities. The most common ailments are asthma and other chronic respiratory diseases.

A USA Today timeline detailing nearly 20 years of inaction by officials from various agencies at all levels of government documents the longtime neglect suffered by the communities surrounding the Salton Sea.

“Our community wants to be a part of the solution, but we need it sooner rather than later.”

The effects of living here become clear when observing the inhalers carried by many residents.

“Often, we can’t go outside. Or we have headaches and nosebleeds that don’t stop easily,” said Conchita Pozar, who has lived in North Shore near the lake for 15 years. Her two children, ages 4 and 12, both have asthma.

Pozar is helping conduct community outreach in the area, which is home to many farmworkers from Mexico, and works with researchers conducting public health studies. She provided testimony, through informal translation, about her family’s experience during a presentation on air quality at the Salton Sea Summit at UC Riverside Palm Desert last week.

Much of the conversation during the two-day conference centered around the possibility of lithium extraction and the many questions that remain unanswered. Participants who needed to listen to the conference in Spanish were routed to a smaller, separate room.

After years of neglect, it’s easy to see why many residents worry that their concerns and their welfare will fall by the wayside in the excitement for lithium that’s been shown by Gov. Newsom and President Biden.

The Lithium Valley Commission is headed by and includes a few community advocates, but it has no budget and no staff. Whether their recommendations, due later this year, will carry weight during important decision-making remains to be seen.

Meanwhile the project is moving forward, with or without community input.

Activists Call On Gov. Newsom to Fund the Fight Against Health and Racial Inequities