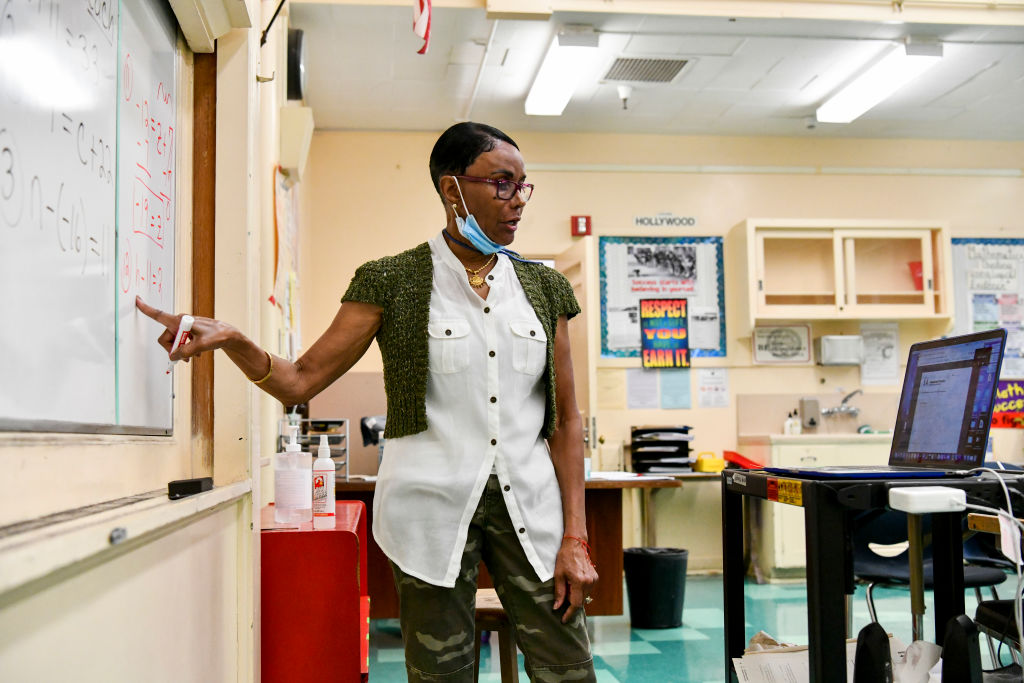 It’s sorely tempting to reduce California’s ragged school reopening effort to a couple of central forces. On one side, Gov. Gavin Newsom has maintained that campuses can open safely before all teachers are vaccinated against COVID-19 and expressed frustration over the prospect of long delays. On the other, five unions recently set conditions that make such a spring return seem wildly far-fetched. (Disclosure: Several of the unions are financial supporters of this website.)

Below the waterline, however, this is a story playing out on several complex levels. They involve basic safety practices, adherence to science, the question of what “risk” even means in this context and the looming concern that a return to school under lax protocols will further race and income driven inequities that already pockmark the timeline of COVID-19 cases and deaths across the state.

Los Angeles and San Francisco, whose school districts have been shut down for most of a year, are under intense pressure to reopen.

And there is one number that ultimately trumps all others: 1,037. That is the number of school districts in California – and each will act in its own best interests.

“Everything is at the order of the district and the county,” said Chris Nixon, a teacher in the giant Elk Grove Unified School District near Sacramento. “What happens in one district isn’t necessarily going to happen in another.”

In Los Angeles Unified, by far the largest district in the state, officials have resolutely refused to consider broad reopening, given that the communities it serves remain in the state’s highest tier (purple) of COVID infection rates and that the state’s teachers and staffers have no apparent priority for vaccination.

“Our goal has to be to get COVID down where we can start having all students back,” Superintendent Austin Beutner told the Los Angeles Times. “The notion that we somehow have this other process where a few students come back – that’s not born in science. That’s political.”

But both Los Angeles and the San Francisco Unified School District, which also has been in shutdown for most of a year, are under intense pressure to reopen. San Francisco’s city attorney took the unusual step of suing the district and its school board to force teachers and students back on campus, an action that was endorsed by Mayor London Breed; an L.A. city councilman announced Thursday that he wants his city to do the same.

The most direct route to get California’s 300,000-plus K-12 educators back in the classroom begins with vaccinating them.

Most legal observers consider those to be longshot attempts, since the power for making school decisions in California is historically and firmly vested in local school boards. But these actions also obscure the real-time issues that are an impediment to any school district going fully open – and Newsom’s constantly changing guidelines are right in the middle of those problems.

The most direct route to get California’s 300,000-plus K-12 educators back in the classroom begins with vaccinating them. In their seven-page document timed to Newsom’s negotiations with the Legislature over the distribution of billions of dollars’ worth of incentive money for districts to open, the unions said the state must ensure that all teachers and staff “have been provided the opportunity to be vaccinated” before students return to a campus at which teachers are required to show up in person.

Newsom has bristled at that idea more than once, memorably declaring during a conversation with the Association of California School Administrators that if “we wait for the perfect, we might as well just pack up and just be honest with folks that we’re not going to open for in-person instruction this school year.”

But the governor’s bigger problem is that his own belated decision to modify the current vaccination tier and include every person over age 65 has added more than 6 million older citizens to a pool that ostensibly includes the teachers, who have no special priority within it.

It’s not at all clear that a declaration by Gov. Newsom or the filing of lawsuits will get the state any closer to being able to safely conduct in-person classes.

Another reality: Many of the state’s schools, newer and older both, cannot meet the California Department of Public Health’s most recent guidelines for being open. Those guidelines, issued in mid-January, include the need to space students’ desks 6 feet apart “except where 6 feet of distance is not possible after a good-faith effort has been made.”

Though it’s not clear what constitutes a good-faith effort, the guidelines make an allowance to put desks within 4 feet of each other. Yet even that distance is all but impossible for most schools. The Roseville Joint Union High School District near Sacramento recently acknowledged that three of its six high schools couldn’t initially meet the 4-foot requirement – but it reopened them anyway, pending survey results on how many students actually show up in person and whether those numbers affect the distancing issues.

There’s also a real concern among teachers that antiquated HVAC systems mean their schools won’t have adequate airflow to mitigate COVID conditions. “I had to open windows at the front and back of class and blow a fan,” one science teacher told Capital & Main. “It was 35 degrees at the start of class.”

The arrival of new variants of the virus is its own issue, particularly if any of the strains prove resistant to vaccines. But at this point any school district choosing to open is relying almost completely on having adequate personal protective equipment, or PPE (which, amid ongoing shortages, is no sure thing), and succeeding at the kinds of mitigation strategies mentioned above, which already have tripped up even motivated school boards.

Finally, there are issues of structural inequity at play. Sending students from low-income areas back into older, ill equipped urban school buildings is practically a recipe for ensuring further spread of the virus, which those students may then bring back into their communities of color that already have been ravaged by the disease.

A global pandemic has meant all manner of adjustments, and the educational system has taken a huge hit. In December, seven families sued the state of California, arguing that it had failed to ensure “basic educational equality” for Black and Latino students during a year of remote learning. The frustrations with and limitations of that system are, by now, well known.

But it’s not at all clear that a declaration by Newsom or the filing of a lawsuit will get the state any closer to being able to safely conduct in-person classes, and when it comes to California’s schools, there is no one-size-fits-all approach – the very reason why, in the end, the 1,037 individual districts will decide for themselves when to reopen.