Despite being solidly Democratic for decades, California contributes more money to the GOP than any state other than Florida. This election cycle, much of that funding is going to members of one of the GOP’s most extreme clubs: election deniers.

Election denial is a spectrum that includes everything from conspiracy theories regarding Antifa or Venezuela switching votes to unfounded concerns about the reliability of mail-in ballots. The effect is often the same: undermining trust in the democratic process. For the purposes of this article, a candidate is considered an election denier if they’ve made unsubstantiated claims of significant voter impropriety, objected to or refused to acknowledge Joe Biden’s 2020 electoral victory, or cast doubt on the ability to gauge the legitimacy of elections. This cycle, most Republican nominees for House, Senate and key statewide offices are election deniers.

Some Republican donors simply may be looking to further their own economic agenda by supporting small government and limited regulation, but Nancy MacLean, historian and author of Democracy in Chains, considers them responsible for the GOP’s anti-democratic movement.

“Donors who are far to the right of ordinary Republicans on questions of political economy are proving willing to weaponize prejudices in order to get base voters out to the polls,” MacLean says. “Donors have now shown they will leverage disinformation to animate that base that gets more and more ‘loony right’ with things like QAnon, the attack on the Capitol, and election denial.”

According to Bob Stern, the former president of the Center for Governmental Studies and co-author of the Political Reform Act of 1974, it should come as no surprise that many of those donors call the Golden State home.

“California has always been known as the ATM for the rest of the country,” Stern says. “During races, you see all the presidential candidates, a lot of Senate candidates, and some House candidates coming out to California.”

When candidates do visit, they’re welcomed by a robust fundraising ecosystem that has raised more than half a billion dollars this cycle, which is still a far cry from the almost $1.7 billion raised in 2020. That’s because midterm races don’t attract as much attention as presidential ones do. Though there’s less money this year, each dollar is more influential.

“A $5,000 contribution means a lot more in a local race than it does in a federal race,” Stern says.

California’s top GOP donors are making use of that during this cycle by spreading out their donations to dozens of Senate and House candidates across the country.

After Capital & Main cross-referenced Federal Election Commission data with statements made and actions taken by candidates, California’s biggest funders of election deniers become clear. In total, seven California donors whose individual political contributions totaled more than $1,000,000 gave at least $100,000 to election-denying candidates’ campaigns or single-candidate committees. Notably, everyone on this list also donated to PACs that subsequently donated to other election-denying candidates, but for the purposes of this article, only direct contributions are included in the count. Every donor was contacted for comment, but none responded. 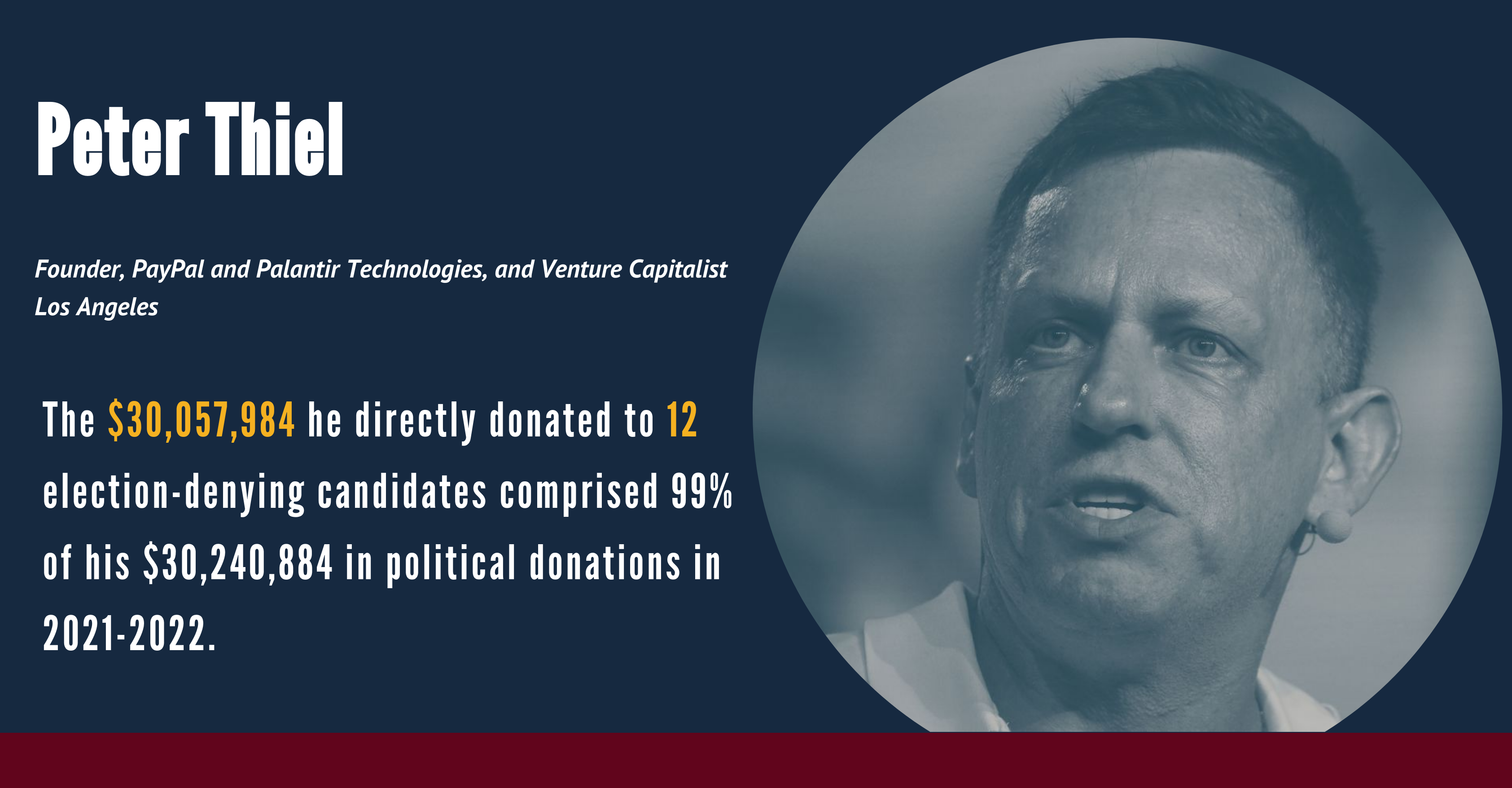 Peter Thiel is an entrepreneur who co-founded PayPal in 1998. He now serves as partner at the venture capital firm Founders Fund and is chairman of Palantir Technologies, a data analytics software company he founded less than a year after selling PayPal for $1.5 billion. Palantir has been used by government agencies including the FBI, NSA, DHS, ICE and the CIA (which was the company’s first outside investor). Palantir has also been mired in controversy for its alleged involvement in human rights violations.

Thiel has played an active financial role in politics for over a decade. But over the last two years, the former member of Donald Trump’s transition team has taken an even more active role in pushing his political agenda.

During Senate primaries, Thiel contributed $15 million each to single-candidate committees supporting J.D. Vance in Ohio and Blake Masters (Thiel’s longtime friend and employee) in Arizona. Both candidates deny the legitimacy of the 2020 presidential election and will face off against their Democratic opponents in two of this year’s most competitive Senate races.

Since Thiel’s bankrolling of Masters, the Arizona candidate has done an about-face on his 2020 election claims and tentatively accepted the results. While Masters and other candidates have changed their positions regarding rigged elections, some have hypothesized that the switch is merely opportunistic. That’s because extremism doesn’t pack the same electoral punch after primaries are over. 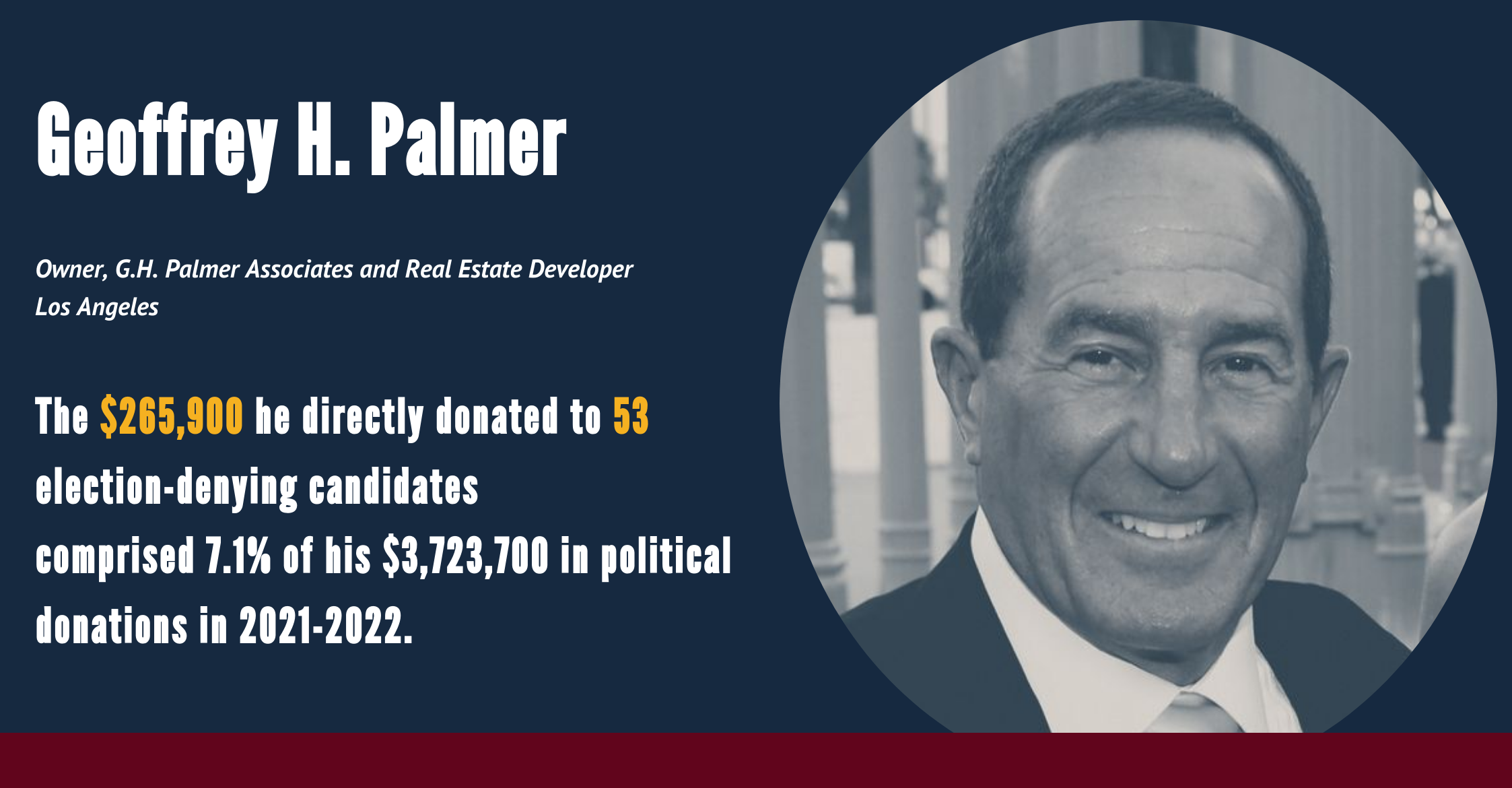 Geoffrey Palmer is a real estate developer, attorney, competitive polo player, and the owner of G.H. Palmer Associates, a real estate company he founded in 1978. Palmer’s real estate projects have made him one of the wealthiest people in the city, but they’ve also landed the L.A. native in hot legal water. In 1991, Palmer was charged with 15 counts of laundering campaign contributions.

Palmer’s campaign contributions didn’t stop there. During the 2021-2022 election cycle, Palmer has donated more than a quarter of a million dollars to election-deniers like Monica De La Cruz, a Trump-endorsed candidate running in Texas’s most competitive House race. In a Twitter video posted just days after the 2020 election, De La Cruz decried “a blatant discrepancy” and voter fraud as responsible for Donald Trump’s (and her own) electoral defeat. The CEO of Western National Group, Michael Hayde has helped develop over 40,000 multifamily units since joining the firm in 1971. Alongside former Orange County Sheriff Brad Gates, Hayde founded Drug Use Is Life Abuse, a nonprofit that teaches young people how to protect themselves against drugs and gangs. Hayde also serves as the treasurer and finance committee chair for United Way, an international network of over 1,000 nonprofit fundraising affiliates.

Like his wife, Western National Property Management President Laura Khouri, Hayde has donated thousands of dollars to election-denying candidates, like Madison Cawthorn. Cawthorn was one of more than 120 House GOP members who voted to overturn the 2020 election. The congressman also predicted “bloodshed” if voter fraud occurred in future elections. In May, the Trump-endorsed representative lost his primary in the wake of mounting scandals. 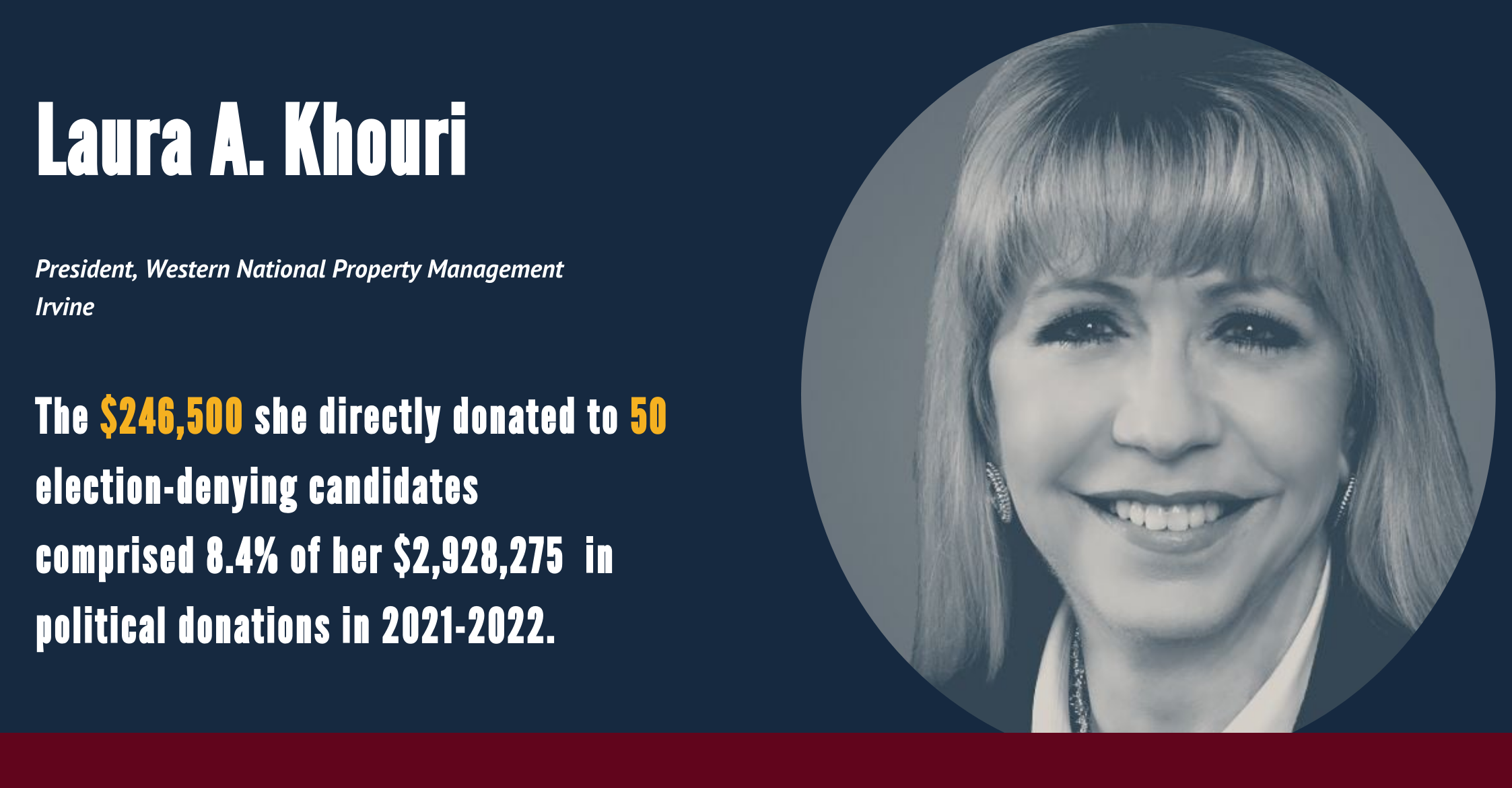 Laura Khouri has worked for Western National Group since 1985. She now serves as the property management company’s division president, overseeing operations on 23,000 properties throughout Southern California, Colorado and Nevada. Khouri is also married to WNG coworker and fellow megadonor Hayde.

In addition to her role at WNG, Khouri served until last year as chairman of the board for Laura’s House, a nonprofit dedicated to supporting women and children who have endured domestic abuse. Her 2021-2022 election donations show a marked departure from that support, however.

Khouri donated thousands of dollars to more than 30 Republican candidates who voted against the Violence Against Women Reauthorization Act of 2021, which aims to provide grant programs for critical services for abuse survivors, increase support for underserved populations and close gaps in federal sex crimes statutes. Most of those candidates also rejected the legitimacy of the 2020 presidential election. Donald Friese is the former chairman and CEO of C.R. Laurence, which manufactures and distributes products for the glass industry. As a young man, Friese moved to Los Angeles after a three-year tour in the Army with “$125 in his pocket” and started working in a C.R. Laurence warehouse. Over time, he amassed total ownership of the company and eventually sold it in 2015 for $1.3 billion. Since retiring in 2018, Friese has spent much of his time with his family’s foundation, which helps low-income families, unhoused individuals and veterans.

Since the 2020 election, Friese has funded more than 40 election-denying candidates, like Yvette Herrell. Herrell objected to counting Joe Biden’s electoral votes from Arizona and Pennsylvania and voted against a commission to investigate the January 6th Capitol riot. Herrell also introduced legislation that would provide asylum to anti-vax Canadian truckers, even though she has personally introduced legislation that would reinforce Title 42, a federal law that drastically limits asylum seeking. is the founder and CEO of the Grimm Family Education Foundation, a nonprofit dedicated to improving health and education opportunities in Kern County, the second most agriculturally valuable county in California. Until December of 2020, she was also the co-owner of Grimmway Enterprises, the world’s largest carrot producer, and Cal-Organic Farms, the largest organic vegetable producer in the country.

In 2017, she was recognized by then-House Majority Leader Kevin McCarthy for her work with her education nonprofit just months after donating thousands of dollars toward his candidacy. McCarthy later urged Agriculture Secretary Sonny Perdue to appoint Grimm-Marshall to a government committee that oversees the trade of fruits and vegetables. The current House Minority Leader continues receiving campaign donations from Grimm-Marshall, even after voting to reject the 2020 election results.

Though less than 10% of her contributions went directly to election-denying candidates, most of Grimm-Marshall’s donations went to more benign-seeming groups that fund the same kinds of anti-democratic nominees. Almost half of her donations this cycle went to Take Back the House 2022, whose roster of beneficiaries is mostly made up of candidates who denied the legitimacy of the 2020 election. Kevin McCarthy benefitted from the committee to the tune of over 3.8 million dollars, making him its largest individual beneficiary. 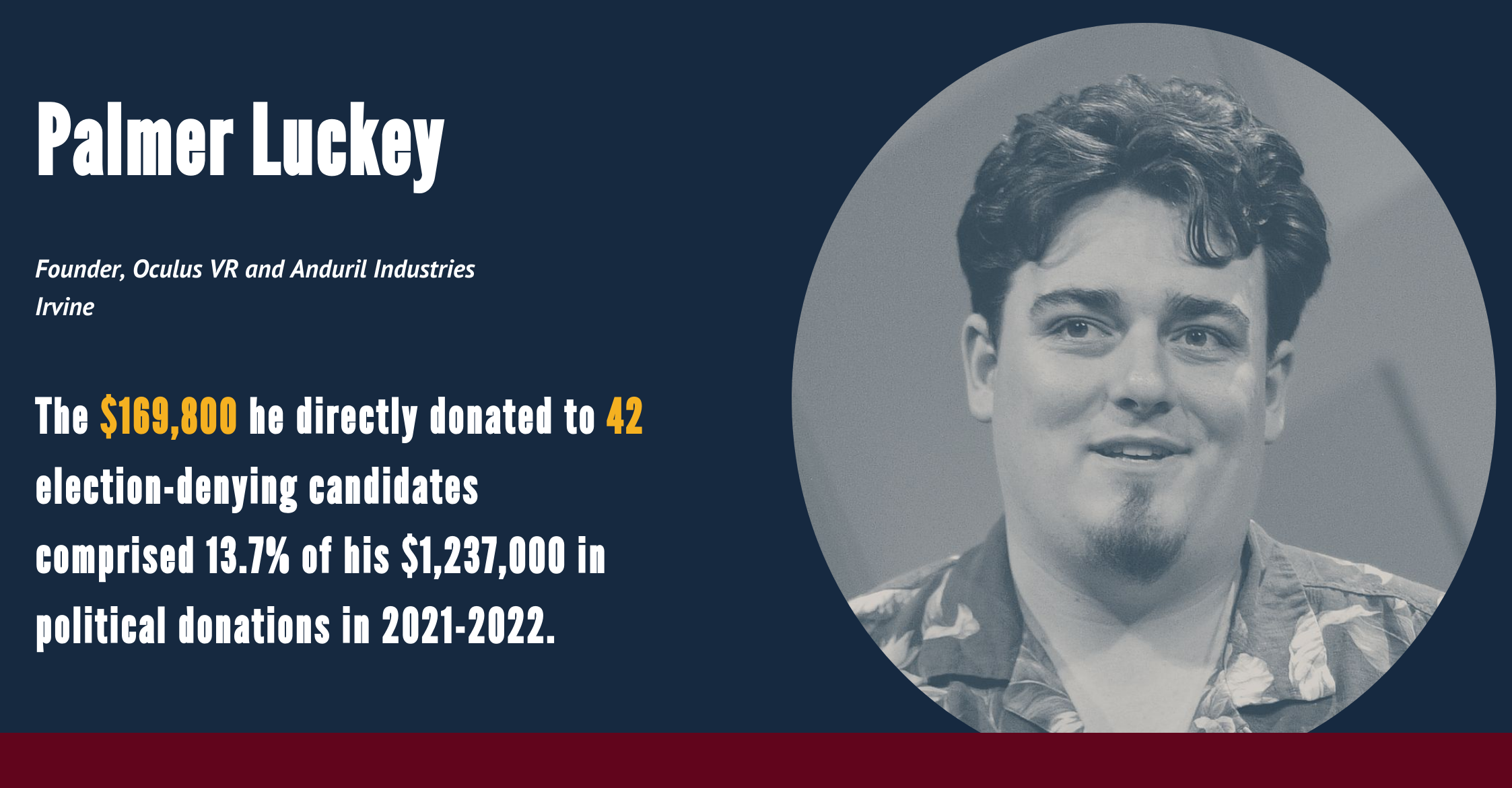 Palmer Luckey is the founder of Oculus VR, a virtual reality company that was acquired by Facebook for $3 billion in 2014. Next, Luckey founded Anduril Industries, a defense contractor that creates AI technology and autonomous systems that patrol land, sea and air. Since the Trump administration, Anduril has been equipping towers along the Mexico–United States border with technology that tracks migrants using AI, a project that some members of Congress call inhumane and likely to cause an increase in migrant death rates.

It’s not difficult to see similarities between Luckey and Thiel — both tech entrepreneurs became wealthy at a young age, sold their companies for billions, then started defense-oriented companies that have partnered with the U.S. government to execute controversial projects, and funded the campaigns of election-denying candidates.

But whereas Thiel concentrated his efforts primarily on two candidates, Luckey spread out his contributions among dozens of election-deniers, like Lauren Boebert in Colorado. Boebert not only voted to overturn the 2020 election, but has also suggested anti-democratic sentiments like opposition to the separation of church and state. Boebert’s claim that “the church is supposed to direct the government” echoes the growing sentiment within the GOP that the United States should be a “Christian nation.”

This story has been corrected to reflect the correct status of Barbara Grimm-Marshall, whose ownership of Grimmway Enterprises ceased when it was sold in December of 2020, according to the company.

‘Young People Are Fed Up’: Inside the Fight to Defend Young Voters