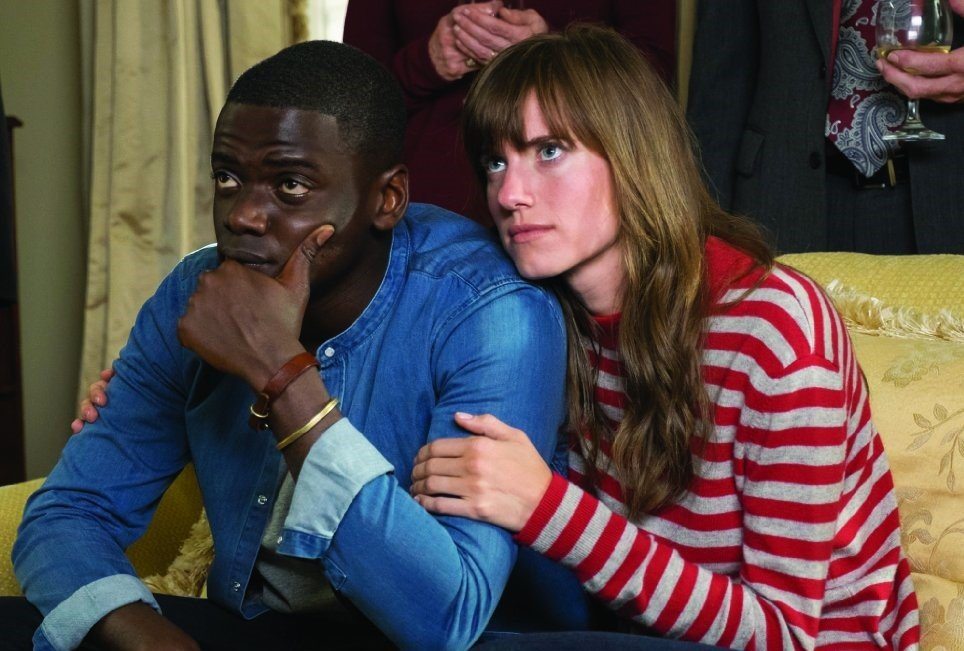 New York City photographer Chris Washington has set aside his weekend for a trip to the country, where he must endure an ancient custom: meeting a girlfriend’s parents for the first time. His understandable apprehension is heightened by the fact that Rose Armitage and her family are white, while he is black – a detail Rose hasn’t yet shared with her parents. On paper and in politically correct conversation, none of this should matter, especially for the super-empathetic Armitages, whose patriarch is the kind of man who prefers to greet strangers with hugs instead of handshakes. In real-life America, however, Chris’ skin color is all that seems to count – which soon becomes apparent in Jordan Peele’s disturbing debut film, Get Out.

As the story’s photogenic couple drives through an idyllic landscape of woods and manicured parkways, Chris begins to enter an Upstate of the mind — until some rude foreshadowing intrudes in the form of a deer that bounds across the road and into the front of their car. This somewhat familiar movie trope should remind viewers that Get Out is a horror film, albeit one with sardonic observations about contemporary race relations. For despite some awkward good fun had at the expense of Rose’s neurosurgeon dad, who never fails to tell black people he would have voted for Obama a third time if permitted, an unmistakable creepiness settles in after Chris meets the two black people who work at the Armitages’ large, rustic home. Both the groundsman and housekeeper move robotically in attentive orbits around the Armitages, and their clipped speech is an unnerving blend of obsequiousness and cloying courtesy. From the moment Chris encounters them, the movie begins its dance toward a bloody denouement.

Peele’s film is provocative fun to watch as both a social satire and old-fashioned fright flick, all the more so because the writer-director leaves the sledge hammer at home. Instead, the script’s shocks are administered in drips, and we’re never quite sure what lurks around the corner of the scene we’re watching. The story begins before we even meet Chris and Rose, as the camera travels down a darkened suburban street that a lone black man has mistakenly wandered onto. In moments a white car begins dogging the man’s steps, its stereo playing “Run Rabbit Run,” a silly old British ditty that will take on a very sinister meaning – and remain in our heads for days.

Likewise, a party thrown by the Armitages becomes a cringefest as the mostly older partygoers reveal their racial hangups to Chris – not through loud taunts or insults, but by their self-conscious attempts to buddy up to him and through comments that teeter between the solicitous and the patronizing. In literature, African-American observations about the phoniness of white society have pinched the national nerves from Ralph Ellison’s Invisible Man to William Melvin Kelley’s dem and beyond, and Get Out has done the same onscreen, becoming a film that seamlessly sutures together The Stepford Wives and Dutchman.

Peele’s script is carried on the shoulders of an excellent cast, including Daniel Kaluuya as the low-keyed, increasingly bewildered Chris, and Allison Williams as his funny, comforting girlfriend, Rose. As Rose’s parents, Bradley Whitford portrays the armchair progressive Dean with wit and restraint, while Catherine Keener’s turn as a psychiatrist with an anti-smoking obsession would alone have made this picture scary. By the film’s Grand Guignol end, these characters remind us that race remains a demon menacing the American soul.

Why “When We Rise” Fell Flat