Washington Post opinion columnist E.J. Dionne Jr. votes at Walt Whitman High School in Bethesda, Maryland. He delights in casting his ballot at a school whose namesake is the poet of American democracy. Dionne, who is also a professor at Georgetown University, has partnered with Miles Rapoport, former Connecticut secretary of the state, in a campaign to implement a universal voting requirement in the United States. Several countries already require voting by everyone who is eligible, including Australia, Brazil, Peru and Uruguay, providing real world examples of how it might work. 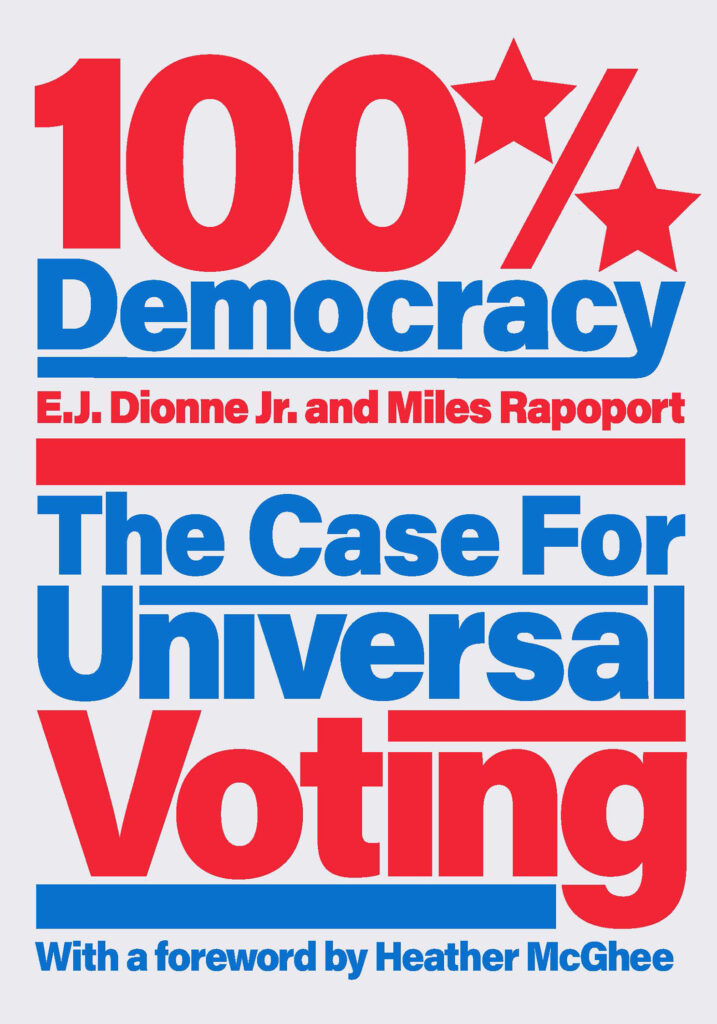 In their new book, 100% Democracy — The Case for Universal Voting, Dionne and Rapoport make an argument for how universal voting can deepen democracy and eliminate the vicious fights over voter suppression and the legitimacy of our elections. Dionne spoke to Capital & Main on the eve of a swing through Los Angeles, part of a campaign to gain support for their proposal.

Capital & Main: Political scientist Walter Dean Burnham wrote about the so-called hole in the electorate, meaning the vast number of people who never vote. Who are the non-voters today?

E.J. Dionne: There’s a big hole among young people. The turnout among those between 18 to 29 years old in 2020 was 54% compared to 74.5% for people over 65. Whites vote at a higher rate than Black people. Black Americans do vote at a very high rate, but the turnout is lower among Asian Americans and Latinos. The fourth hole in the electorate is by class. People in the less remunerative occupations toward the bottom of the class structure vote at a lower rate than people at the top. In 2020, about 41.5% of those with less than a high school diploma voted versus 83% of those with advanced degrees. So it’s the voters who vote all the time who get all the attention from politicians and from campaigns.

“An awful lot of money is invested by campaigns just in making sure people get to the polls or protecting your voters when they cast ballots.”

Our plan is modeled largely after the Australia system. In Australia, voting is something like jury duty. Every voter would be required by law to vote under our system. If you didn’t vote, there would be a $20 noncriminal fine. As in Australia, you could get out of it easily if you are sick or have a legitimate excuse for not voting. In Australia, only about 13% of nonvoters actually pay the fine. And you don’t have to actually cast a vote for anyone. You can cast a blank ballot or draw Mickey Mouse on your ballot. We are not compelling anyone to make a choice which the courts might construe as a form of compelled speech and therefore unconstitutional. The whole idea is to create a new culture around elections.

You make an argument in the book that universal voting would change the way candidates campaign, encouraging more unifying messages and programs.

We are not claiming we have an elixir that cures all that ails our political system. We would still have problems we need to fix. We will not completely get rid of negative advertising. In political campaigns a lot of the advertising and social media contact is directed toward really ginning up your own base, often by using anger to motivate turnout or to hold down turnout on the other side by vilifying the other side’s candidates. Now with this different system your advertising is going to everybody who is going to vote. So, there’s no point in the advertising designed to suppress voting. An awful lot of money is invested by campaigns just in making sure people get to the polls or protecting your voters when they cast ballots. So the turnout issue would be taken off the table.

You point out that in 2020 we had the highest voter turnout — 67% — in 120 years. But that was primarily the result of extreme polarization, right?

Obviously, strong feelings against or for Donald Trump were part of why the turnout was so high. But the other reason is that we have made it easier than ever for people to vote. Many more states adopted mail ballots. Many states allowed people to drop their ballots in conveniently located drop boxes. And with this universal system you are making it easy for everyone to do their civic duty.

Assaults upon democracy have occurred at specific times in our history. What are the motivations that lead to attempts to restrict voter participation?

The first one we have to mention is racism. After the Civil War, former slaves were enfranchised. They made a major difference in the politics of all the former Confederate states and other Southern states as well. There was movement immediately by mostly economically privileged whites to take the franchise away for Black people. And it took us another 100 years to restore those rights. There is a fear that some new group, like new immigrants, will endanger their hold on power. Voter suppression comes in all kinds of shapes and sizes. One of the most amusing and outrageous is a law in Texas that says you can use your concealed carry [gun] permit as a form of voter ID, but students at state universities could not use their government issued state university ID to vote.

The Voting Rights Act of 1965 was supported by 30 congressional Republicans. Can you name one Republican today who would support universal voting?

I know some who privately do. Your point is well taken. Republicans were incredibly important to the passage of both the Voting Rights Act of 1965 and the Civil Rights Act of 1964. They played leading roles and pushed those bills through. It’s worth remembering at that time that a lot of the Southern Democrats were conservative segregationists. The abandonment of voting rights by so many Republicans is really a very disconcerting thing. Lisa Murkowski, the senator from Alaska, was the only Republican to support the John Lewis Voting Rights Advancement Act.

I have a Republican friend who has run campaigns who’s a moderate who likes our system because he thinks that it would create a more moderate electorate that would encourage the Republican Party to abandon some of their extremism. Bills for universal voting have been introduced in the Connecticut and Massachusetts legislatures.

“In effect, a Californian has less influence on the outcome of a presidential election than somebody in Wyoming or North Dakota or Rhode Island and Vermont.”

In your book Why Americans Hate Politics, you wrote that elements of the New Left of the late 1960s prepared the way for Ronald Reagan by acting as the “wrecking crew” of liberal ideology. What’s your assessment of the progressive left today with respect to voting, politics and political parties?

I’m actually very sympathetic to the early New Left. The Port Huron statement of the early Students for a Democratic Society was extremely democratic and constructive for our politics. There was bitterness against parts of the Democratic Party for supporting the Vietnam war. I make the point that parts of the counterculture pushed a kind of extreme individualism that ended up paving the way for Ronald Reagan. I think a lot of today’s left is radically democratic in a good sense. I believe that progressives and moderates are natural allies because both are fighting an extreme conservatism which does not accept an important role for the government in creating a greater degree of social and economic justice. Having vision in politics helps you know where your step-by-step changes are leading.

What can we do here in Los Angeles or at the state level to enact universal voting?

California has adopted a lot of forward-looking voting laws that make it easier for people to vote, including things like your easy mail voting, early voting, election day registration. This has really boosted turnout. Of course, we’d like somebody to introduce our idea in the California Legislature and see it debated. We’ve worked with some great lawyers who have helped make this proposal constitutional. In California, your charter cities could experiment with this in local elections. To be honest, I think we need to do more persuading because right now a lot of people are skeptical.

Many analysts of our politics argue that we have a stunted and paralyzed political structure designed in the 18th century. What’s the solution to those institutional problems?

A lot of people point to James Madison’s Constitution and say that with all our checks and balances we make it harder to govern. I do not like the Electoral College because I think it undervalues votes in states with a lot of people like California and overvalues votes in states with small numbers. In effect, a Californian has less influence on the outcome of a presidential election than somebody in Wyoming or North Dakota or Rhode Island and Vermont. The filibuster in the Senate is being used in a far more destructive way than it was when it was first adopted. And by the way, the filibuster is not part of the Constitution, as it was adopted later. I think there’s plenty of room to make this system work. It’s just the same system that adopted the New Deal, the Civil Rights Act and the Great Society. We don’t have to blow up the whole system. Why not adopt a new system that will give everybody a voice?

The Fight to Tax the Super-Rich