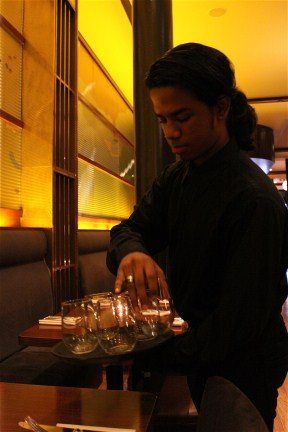 Big Food companies and their lobbying groups have lied to us many times. They convinced Congress to include tomato paste on pizzas as a vegetable. They say we need industrial, chemical-laden agriculture to feed the world. (Check out Anna Lappé’s new video Food MythBusters to learn that we don’t.) And Big Food has also spread the mythology that if the minimum wage is raised, food will become so expensive that none of us will be able to afford to eat out – or eat at all – again.

Yes, that’s a lie! On this Food Day 2012, our organizations are releasing a new report, A Dime a Day: The Impact of the Miller/Harkin Minimum Wage Proposal on the Price of Food. The proposed Fair Minimum Wage Act, introduced this year by Representative George Miller (D-CA) in the House and Senator Tom Harkin (D-IA) in the Senate would raise the federal minimum wage from $7.25 to $9.80 per hour over the next three years and the tipped minimum wage from $2.13 to 70 percent of the regular minimum wage.

We found that this increase in the regular minimum wage and the tipped minimum wage would have a minuscule impact on food costs.

Even if the entire cost of increased wages is passed on to consumers, grocery store prices would rise, on average, less than half of one percent over the three-year phase-in of the new minimum wage – and restaurant food prices would also increase by less than one percent per year. This would mean a $0.45 increase on a $20 restaurant bill over three years.

Overall, even if all employers passed on 100 percent of the wage increase to customers, the average American household would pay less than a dime a day extra for food over the three-year implementation of the minimum wage increase. This is actually the highest it could possibly be, because businesses could choose to not pass on the entire cost to consumers. We decided to conduct this study, with help from Chris Benner, Associate Professor at UC Davis, because we had to confront the myth that raising the minimum wage would make food too expensive for all of us. In fact, raising the minimum wage would not only not prohibit us from being able to put food on the table, but it would also allow the millions of workers who work in the food system to put food on the table as well. They can’t right now because their wages are just too low.

Twenty million people work in the food system in the U.S., and more than half (10 million workers) earn less than the poverty line for a family of three. In our report, The Hands That Feed Us, which came out in June 2012, we found that food workers use food stamps at 1.5 times the rate of the rest of the U.S. workforce and face food insecurity, or the inability to afford to eat as defined by the USDA, at 1.2 times the rate of all other workers.

Not only does the food system represent the largest employer of workers in this country, but it is also the largest employer of minimum wage workers. So, the workers who touch our food would be the greatest beneficiaries of a minimum wage increase – almost eight million workers in the food system. In total, 29 million workers in all industries will benefit from the minimum wage increase. The Economic Policy Institute estimated that all workers affected by the increase would earn an additional $40 billion in additional wages over the first several years of the bill’s enactment.

The Fair Minimum Wage Act is also a historic shift from minimum wage increase legislation of the last two decades, since the federal minimum wage for workers who receive tips, like servers, bussers and bartenders, has been frozen at $2.13 for more than 20 years. This bill would result in more than a 100 percent wage increase for them over three years. For those workers earning the minimum wage, the bill’s passage would result in a 33 percent wage increase over the same period. For these millions of working people who touch our food, the bill’s passage could provide these workers the means to support themselves and their families.

So stand up to Big Food! Sign our petition on SignOn.org telling members of Congress that as a consumer, you’re willing to pay an extra dime a day so that 29 million workers can receive a much needed raise, and they should support the Fair Minimum Wage Act.

Walmart vs. Chinatown: The Suspense Builds