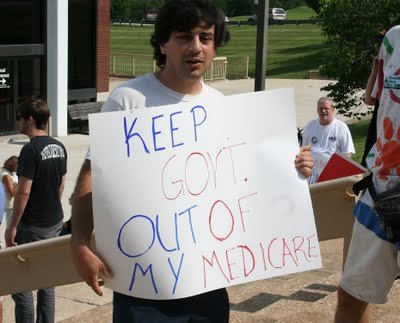 Within the padded walls of the House of Representatives, few agenda items consume more time than figuring out how to overturn President Obama’s health care reform law – and, looking down the road a little, how to scuttle Medicare as we know it. These two causes, along with countering the daily menace of Sharia law at the county courthouse, are what make certain conservatives get up early in the morning. Yet now a Commonwealth Fund survey shows that when it comes to Medicare, at least, most senior citizens are quite happy with the government-provided service they receive.

Who would want to fix something so obviously not broken? Enter Congress. As reported by the Los Angeles Times, “Republicans, including former Massachusetts Gov. Mitt Romney . . . want to convert Medicare into what they call a ‘premium support’ program that gives beneficiaries vouchers to buy a private insurance plan of their choosing.” Forget the ad speak about “premium support.” You could stop reading at “vouchers,” which is code for the privatization of government assets; throw in a little Bain juju, and you can see where the “party of ideas” would take Medicare – right off a cliff.

The Times quotes Representative Paul Ryan (R-WI), whose own Congressional health plan is completely paid for by the government, telling Human Events, “Choice and competition remain the only means by which costs can be brought under control without sacrificing quality.” He then dismissed Obama’s efforts to make Medicare more efficient as “a recipe for government rationing.”

Apparently seniors love such rationing, though, because as the Times noted, the Commonwealth Fund poll “found that elderly Americans feel they have much better access to medical care through Medicare than do Americans who rely on private coverage.”

Liberals are often accused of wishing to spread the wealth, but the Right’s abhorrence of a popular government program that works can only mean they want to spread the pain of those who suffer with inferior medical service. High-Speed Rail Is No Mirage