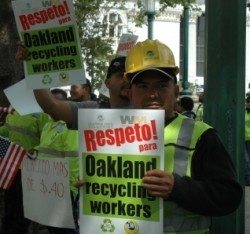 Over 200 Oakland recycling workers staged a powerful show of unity and action by striking on Tuesday, July 30. Employees from the city’s two recycling contractors – Waste Management and California Waste Solutions (CWS) – walked off their jobs midway through the morning shift.

Then, instead of picketing in remote industrial areas where the recycling plants are located, workers formed caravans that converged downtown at Oakland’s City Hall. The result was a full day of political action and solidarity that included marches, “human billboards” along Broadway and 14th Street, visits with local and state elected officials, and a spirited rally. The day ended where rally participants – including many community allies – filled the upper seats of the City Council chambers and addressed the City Council that evening.

Recycling worker Emanuel San Gabriel is one of CWS workers who left his dusty and noisy workplace behind to join the protest. He wasn’t alone, with 100 percent of his CWS co-workers joining the effort. San Gabriel spoke at the rally, explaining that the work they do is valuable for the community and environment – but not respected because of low pay and a lack of benefits.

Last year, Waste Management was charged by Cal-OSHA with violating safety rules that led to the death of a landfill worker employed at the Davis Street facility in San Leandro, where recycling also takes place. Waste Management refused to pay any fines and continues to deny responsibility for causing the worker’s death.

Other workers, including many from Waste Management, detailed the hazards that they face each day. The dangers were made obvious with a 30-foot display of typical items found on a recycling line. Mixed with the paper, plastic and glass were used hypodermic syringes, animal and human feces, hazardous wastes and solvents, and building materials that often contain asbestos and lead.

The hazard display was one of many ways that workers used to send a strong message that resonated with the public. Interviews, in most cases, were done by workers – not union officials. Signs were clear with simple messages calling for “justice” and “respect.” Workers felt comfortable talking about “corporate greed.” The result was good coverage from television, radio and newspapers – all featuring workers speaking in their own voices.

The job action was triggered by labor law violations committed by Waste Management and CWS, resulting in an “unfair labor practices strike.” But the concerns raised by workers went beyond the unlawful retaliation, bad-faith bargaining and other violations by the companies. Nearly everyone raised the problem of disrespect – which became the common rallying cry among the predominantly immigrant workforce.

Among the many signs of disrespect, they say, are the low wages, which amount to just $12.67 and less per hour – while the same recycling work in San Jose and San Francisco pays $20. While the low paychecks are issued by private companies (Waste Management and CWS) the City of Oakland sets the terms and conditions for lucrative contracts – which both companies are now lobbying to extend for another 10-20 years.

“We want a better life for our families. We do important work for the environment and this community, and these companies can afford to treat us better.”

Every worker wore the same button: “$20 by 2016!” – referring to their goal of parity with other Bay Area cities that already pay recycling workers more fairly.

In the weeks leading up to the strike, workers organized weekly protests in front of the Waste Management’s corporate headquarters on 98th Street in Oakland, near the airport. The effort – planned by workers themselves – attracted impressive support from co-workers who volunteered hundreds of hours of time to the cause. Good media coverage at those actions allowed workers to practice talking about Waste Management’s $800 million dollar profit last year and the $7 million compensation awarded to their CEO. The theme of “corporate greed” used by workers at these “practice protests” became a key theme in the public messaging for the strike.

While workers and organizing in the workplace remain the heart of the campaign, important support from allies in the community was evident at the action. The East Bay Alliance for a Sustainable Economy (EBASE) that includes the Faith Alliance for a Moral Economy (FAME), the Sierra Club, Environmental Health Coalition, Worksafe, and the global Alliance for Incinerator Alternatives (GAIA), ACCE, Mujeres Unidas y Activas, and many others. The recycling workers at waste Management and CWS belong to ILWU Local 6 which is helping the workers organize their campaign.

While most recycling workers speak Spanish, the strike events and materials were bilingual, to make sure everyone understood and felt included. This became an advantage with media coverage that attracted Spanish-language stations to both “practice protests” that led up to the strike. Translation and a mix of languages were noticeable throughout the day – building unity by reducing differences.

Oakland’s City Council will ultimately decide whether their recycling workers join the better-pay that San Jose and other cities provide, or continue to stagnate with low-wage “junk jobs” instead of the good green jobs that Oakland and other cities so desperately need.

(Craig Merrilees is communications director of the International Longshore and Warehouse Union. His post first appeared on Labor’s Edge and is republished with permission.)

Related Topics:recyclingWaste Management
Up Next

Economic Inequality: The Sky’s Not the Limit

Passing the Buck on Health Care