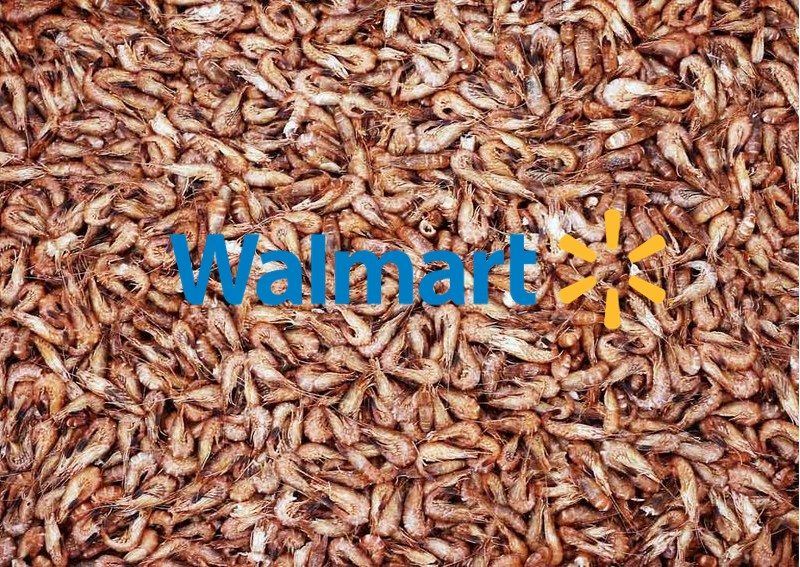 Shrimp has been hovering near the bottom of the list of things I will eat for a while. Unless you make a point to get it wild, chances are very good it has been raised in a crowded pond and treated with loads of antibiotics. Factor in its mammoth carbon footprint, and the fact that many of the developing world’s mangroves have been displaced in recent years to make room for shrimp farms, and my appetite for these crustaceans all but disappears.

Now we can add labor abuse to shrimp’s laundry list of problems.

A group of shrimp workers has been protesting dismal conditions in a Thai factory for weeks. The factory, Phatthana Seafood, is one of several brands under a corporate umbrella called PTN Group, and is distributed by Rubicon, a major supplier to Walmart here in the U.S.

Not only is Phatthana being accused of skimping on the pay they’ve promised to workers (and keeping a percentage of it against the debt workers incur to travel to the factory — a practice described in the human rights community as “debt bondage”), but they’ve also reportedly been keeping the workers’ passports and releasing them only for a (steep) fee.

Sok Sorng traveled from Cambodia to Thailand to work in a large, industrial seafood factory and is now regretting the choice to leave home. According to the Bangkok Post, the 20-year-old was told he “would have the job for two years and would receive living arrangements and a food allowance.” But when he arrived, he found that fees for both living expenses and passports not mentioned in the original contracts had been deducted from workers’ salaries. The Thai paper also reports:

He found he had to work 26 days a month. He got his salary every two weeks, but half was withheld to ensure he did not run away. “Most of the workers wanted to go home, but we will be in debt from preparing to travel and an unknown amount we are told to pay to get passports and transportation,” he said.

All this might explain why Sorng has become a spokesperson for the protest. And while the Asian news outlets covering the story don’t pretend the seafood processor is using practices unheard of for Thailand, the mere fact that so much of the product is being distributed globally — and to Walmart, no less — has helped raise the profile of the protests.

To put this in context, shrimp is America’s top-selling seafood. Walmart, meanwhile, is our biggest grocery retailer. Put the two together and you can picture how the massive global stream of frozen, cooked shrimp pours into American households. (This also explains how the shellfish went from being a rare, expensive delicacy to a $1.99 fast-food menu add-on.) There are still a few sources of domestic shrimp in the U.S. (the Gulf of Mexico being one of the largest), but around 90 percent of the shrimp we eat comes from abroad, and most of that comes from Thailand, Vietnam, and South America. (China is also a large producer, but they eat much of what they produce.)

In other words, this is not an obscure story about one of those less important foods. And if the recent media spotlight on Foxconn Technology and its relationship with Apple have taught the American public anything, it’s that most things made for the U.S. travel en masse a convoluted path from one closed-door operation to another. And it’s never easy to access the truth about the way workers are treated behind those doors. The foreign factories producing our food are no different.

Organizers for Making Change at Walmart — a project of the United Food and Commercial Workers International Union — have been helping the shrimp workers at Phatthana Seafood raise their profile and put pressure on the multinational retailer. The group recently sent a letter to Walmart [PDF] detailing the abuses in the factory (as well as a second factory in Thailand that ships over 70 percent of its canned pineapple product to Walmart).

In their letter, the American labor union references Walmart’s standards for suppliers, which states that “all labor must be voluntary” and “workers must be allowed to maintain control over their identity documents.” The union’s letter reads:

As you know, the confiscation of documents is a violation of Thai law as well as Walmart’s Standards for Suppliers. Receiving half the hours and pay promised to them and without promised lodging and transportation, many of the workers face malnutrition because they are unable to even afford enough to eat.

Walmart, meanwhile, has spent the week promoting the company’s progress on its sustainability milestones (which they presented to the public in a glitzy meeting that was webcast around the world). The company’s goals, as it describes them, are: “To be supplied 100 percent by renewable energy; to create zero waste; and to sell products that sustain people and the environment.”

Meanwhile, around 300 of the migrant workers at the shrimp factory must rely on a donated rations from an NGO because they can’t currently afford to eat. As organizer Sok Sorng told The Phnom Penh Post: “They need food so much because [they have received] no money from work.”