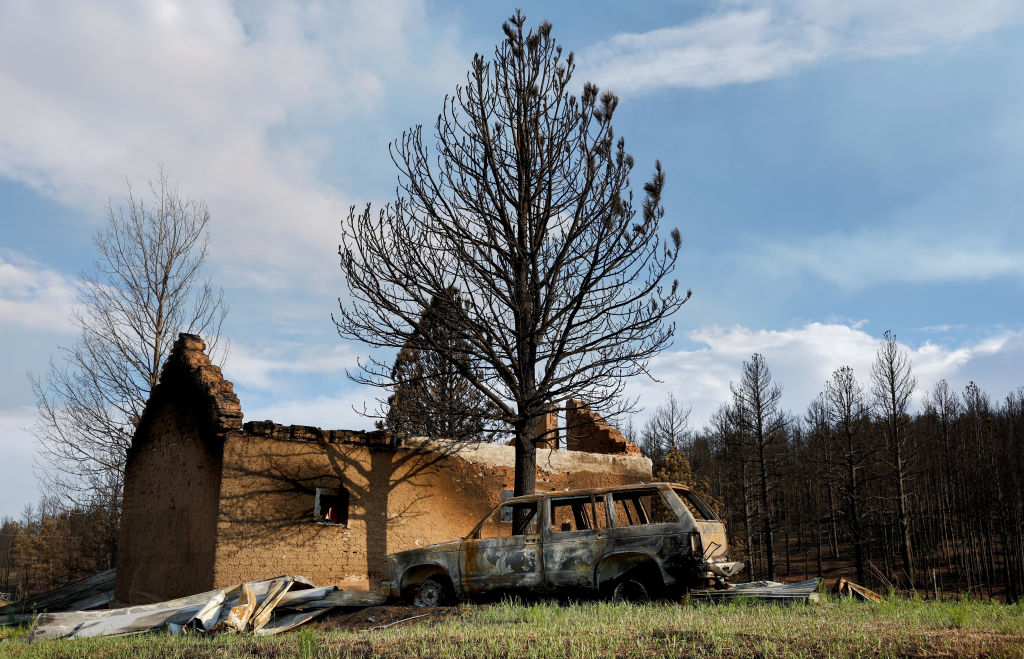 On June 21, U.S. Forest Service Chief Randy Moore somewhat surprisingly laid the blame for the largest wildfire in New Mexico history squarely at the feet of his own agency: Using outdated information and practices, his employees started a prescribed burn that raced out of control. His admission came in the introduction to an 85-page Forest Service report on the timeline of events leading to the Hermits Peak fire, a long-planned prescribed burn that later merged with the Calf Canyon wildfire — also lit by the Forest Service — to form the record-breaking blaze.

“People are looking for someone to blame for the devastation,” says Liliana Castillo, deputy director of Climate Advocates Voces Unidas (CAVU), a Santa Fe-based environmental group. “That is completely understandable.” But a key cause of the blaze isn’t directly addressed in the report.

In the introduction, Moore writes that in the century-plus that the agency has fought fires, a runaway prescribed burn “was nearly unheard of until recently,” because “climate change is leading to conditions on the ground that we have never encountered.” But where does that climate change come from?

“It’s driven by human beings exuding carbon to the atmosphere,” says Lucas Herndon, energy and policy director of Progress Now New Mexico. “And, unfortunately, in the state of New Mexico, the biggest contributor to that is the oil and gas industry.”

As a state that’s the second biggest oil producer and sixth biggest natural gas producer in the country, New Mexico has an outsized effect on the climate. Nationally, transportation accounts for the largest source of climate change causing greenhouse gas emissions at 27%. In New Mexico, 53% of these emissions come not from oil and gas consumption but from its production — from wells, pipelines and processing stations.

If New Mexico is to truly address this increasing fire risk, it will have to do more than castigate the Forest Service. The state has to address its own, significant contributions to the conditions rendering Forest Service policies — and life in parts of the state — obsolete. 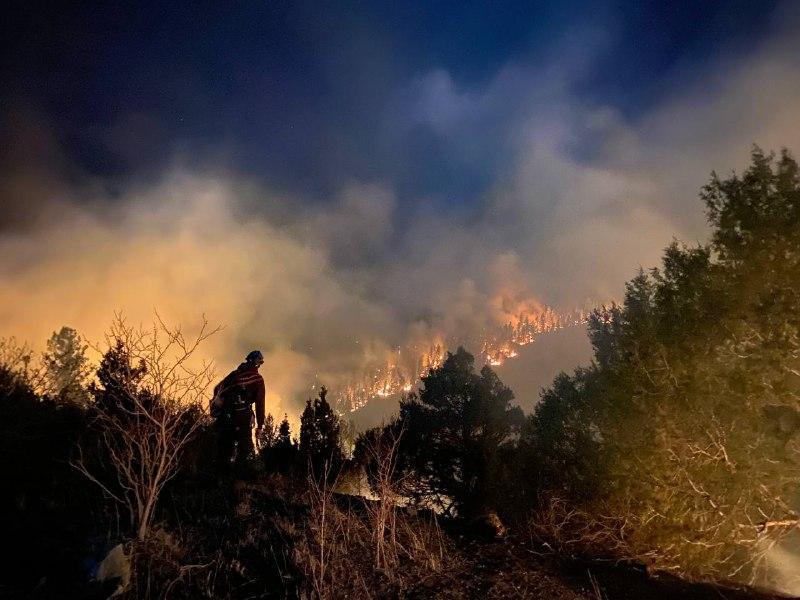 The Hermits Peak and Calf Canyon fires are not just two more fires in a state prone to burning. As Castillo at CAVU put it, “These are historical.”

The planning and preparation for the prescribed burns went back more than two years, but it took just a little over five hours on April 6 for the fire at the base of Hermits Peak, west of Las Vegas, New Mexico, to jump its containment lines and start a new chapter in the state’s fire history.

The Calf Canyon fire was lit in January and smoldered for months through a dry winter before reerupting. Both fires began before the unofficial start of the fire season in late May to early June, and the combined fire still smolders despite recent rains. The statistics are sobering: hundreds of buildings burned, thousands driven from their homes and nearly 350,000 acres and whole communities torched.

Speaking at a meeting of the U.S. House Special Committee on Climate Change on June 14, New Mexico Gov. Michelle Lujan Grisham said, “The West, including New Mexico, isn’t any longer under an extreme drought situation; we’re in aridification.” That is, we are no longer suffering a lack of normal precipitation but rather a shift from a wetter climate to a drier one — one more prone to catastrophic wildfires. And the shift isn’t temporary.

Aridification, wild winds, a lack of snow leading to overly dry forest conditions are all dramatic changes to the natural environment, the visible effects of climate change. And the simple, undeniable fact is that these fires are fueled by the fuels we burn.

The oil and gas industry also fuels more than a third of the state budget, which focuses many political eyes through a fiscal lens and leaves state agencies that regulate fossil fuel production underfunded. In the last legislative session, Rep. Patty Lundstrom, the Democratic chair of the Legislative Finance Committee, pushed for tax and development breaks for a hydrogen power plant in her district that would consume vast quantities of natural gas. And in the introduction to the latest Legislative Finance Committee newsletter, she wrote, “Without a doubt, renewable energy is in New Mexico’s future. But so are fossil fuels. It doesn’t have to be one or the other.”

“An oil driller pumping oil out of the ground is not exactly the spark that lit the fire in the forest,” Herndon at Progress Now New Mexico admits. But at some future point, he says, “We are going to have to make a decision if we are going to continue relying on an industry that is absolutely killing us at the same time as they’re paying our bills.”

“The science shows us that oil and gas emissions are warming our planet and fueling climate change. And New Mexico is now the fastest warming state in the country.”

“I would say,” Herndon observes, “that that clearly points to Chevron putting more priority on the outcome of political races in the state of New Mexico than they’re interested in fighting fires.”

Furthermore, all four companies were cited by the EPA for Clean Air Act violations at their New Mexico operations in 2019. Though in the end none of them was fined or penalized in any way, three were cited again in 2020. In these cases, their facilities vented natural gas and associated pollutants directly to the atmosphere. Methane, the main component of natural gas, is 80 times more potent than carbon dioxide as a greenhouse gas over a period of 20 years.

“The science shows us that oil and gas emissions are warming our planet and fueling climate change. And New Mexico is now the fastest warming state in the country,” Castillo says. “New Mexico communities are paying the price for us turning a blind eye to the reality of climate change.” 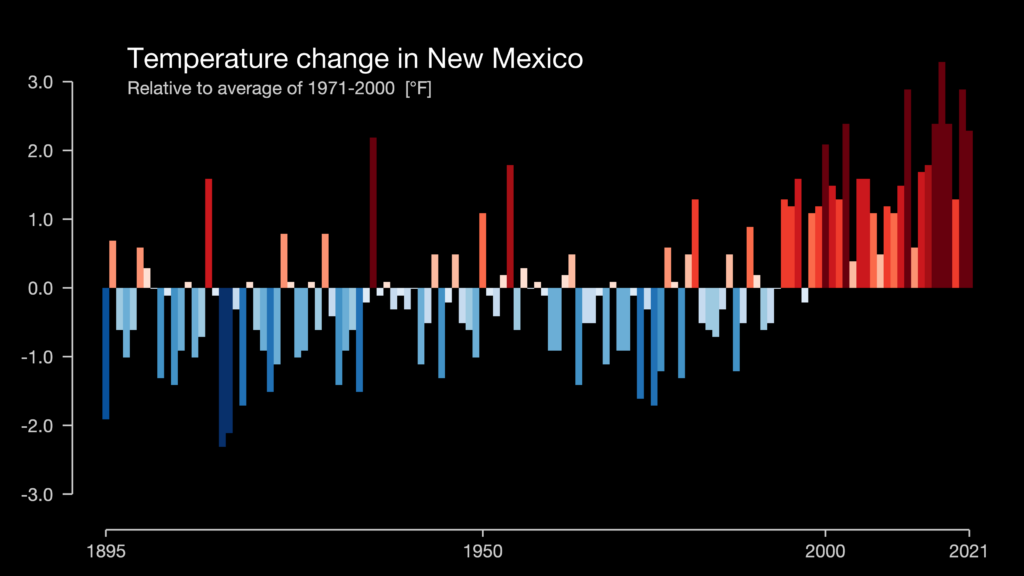 “Our seasons are no longer true seasons,” says Anita Gonzales, a board member of the Sierra Club’s Rio Grande Chapter who lives in Las Vegas, the city closest to the Hermits Peak-Calf Canyon fire. The summers are noticeably hotter and longer, she says, and the winters are dryer. Her family goes back seven generations in the area, “but never can I remember a season that forest fires are so many and so … devastating.”

The New Mexico Department of Homeland Security and Emergency Management lists 14 named wildfires in the state so far this year. Most began before the traditional fire season. According to Nora Sackett, press secretary to Gov. Lujan Grisham, the firefighting costs for the Hermits Peak-Calf Canyon fire alone already total more than $255 million.

For years, New Mexicans have heard about the long-term health consequences of living near oil and gas wells. The Environmental Defense Fund last month released a map showing the demographics of people who live near those wells in the United States. In New Mexico, as in so many other parts of the country, the majority of those most affected are people of color. So far, this year’s fires have fallen between the state’s two major oil and gas fields. But the demographics of a majority minority state mean that the effects of the wildfires also have an outsize impact on people of color.

Gonzales helped raise $25,000 for the Las Vegas Community Foundation for people affected by the fires. That was after she and her family were forced to flee her home in town as the wildfire drew close. “That was a pretty extreme reality check that it was so close to the town itself,” she says. “We thought we’d be safe.”

“The ground is petrified. Rocks are broken from the extreme heat … everything is just ash.”

In the end, she was and returned home. Gonzales’ aunt, who lived about 40 miles away in the mountains, wasn’t so lucky and underestimated the fire. “She tried to wait it out, thinking it would be fine,” Gonzales says. “She didn’t pack much.” But eventually the fire raced in and her aunt had to race out. She had a trove of old family photos in her home, but “those all got burned up in the fire,” Gonzales says.

President Joe Biden has promised that the federal government will pay for all costs associated with the fire, including business, farm and home repairs. So Gonzales’ family recently returned to that home in the mountains with a representative from FEMA. But there was nothing.

“It was crippling for a moment,” Gonzales says. A small house in the forest, surrounded by “an abundance of green and beautiful scenery and mountains and memories” — all wiped away.

“It’s just complete black and charcoal,” she says. “The ground is petrified. Rocks are broken from the extreme heat … everything is just ash.”

The loss is devastating to Gonzales.

“A whole life — a whole existence — is just gone,” she says.

The second largest fire in the state’s history was first spotted on May 13 in the remote, wild mountains in the south of the state. Since then, it has burned much of the Aldo Leopold Wilderness Area, named for one of the Forest Service’s earliest foresters, a noted author and the creator of the notion of the Land Ethic. He wrote that the idea “simply enlarges the boundaries of the community to include soils, waters, plants, and animals, or collectively: the land.”

The fire burning his namesake land — called the Black Fire — has charred more than 325,000 acres. It, too, started before the usual fire season. And it, too, is human caused, though authorities are still investigating the circumstances.

Castillo agrees — and she says it’s past time to address that reality. “Many of our public policies related to oil and gas are out of line with New Mexican values,” she says. “New Mexicans deserve a sustainable and thriving economy that does not require us to sacrifice what makes New Mexico special.”

“We abuse land because we regard it as a commodity belonging to us,” he wrote. “When we see land as a community to which we belong, we may begin to use it with love and respect.”