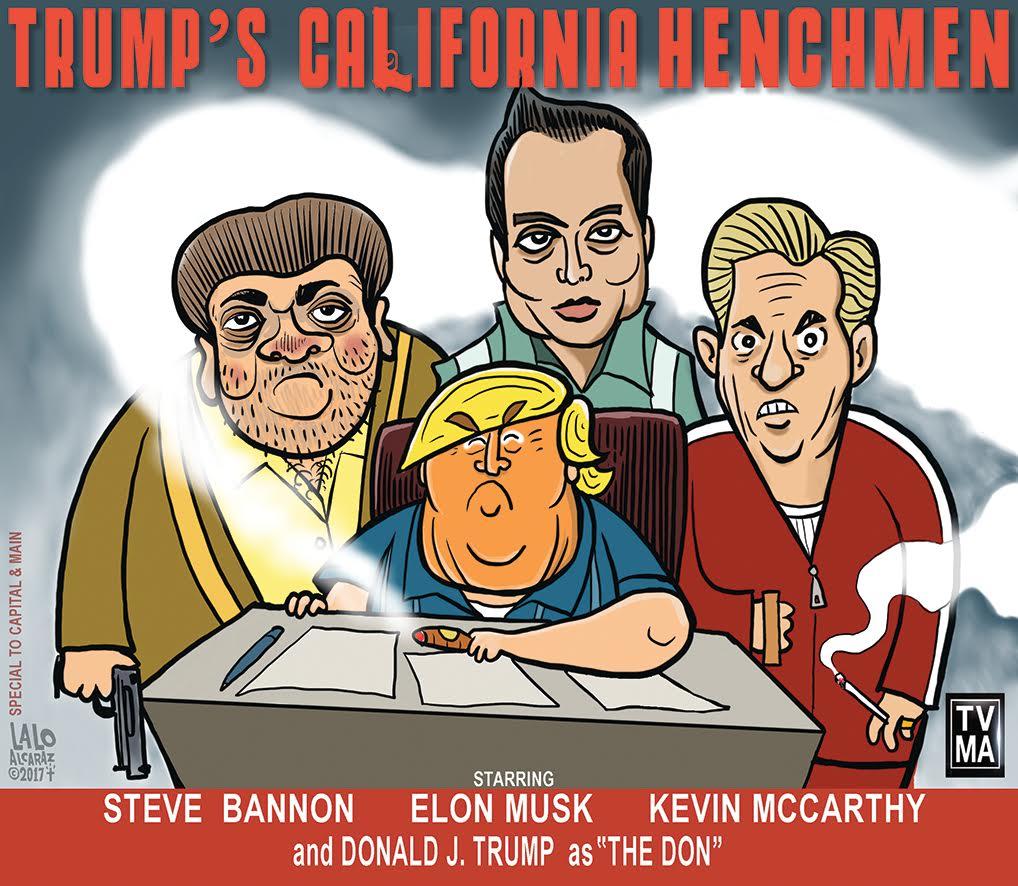 When President Donald Trump appeared on a video monitor at the Republican National Committee’s Spring Meeting in San Diego on May 12, there was no hint that his policies might be causing many problems for the GOP in California or anywhere else. The 168 delegates from across the country assembled at the Hotel Coronado cheered wildly at the prerecorded video, in which the president seemed relaxed, even happy.

“I’ll be going around to different states. I’ll be working hard for people running for Congress and the people running for the Senate. We can pick up a lot of seats, especially if it keeps going the way it’s going now,” Trump said. “We’re fixing things fast.”

Indeed, California’s 14-member Congressional delegation has formed the backbone of Trump’s legislative efforts. With House Majority Leader Kevin McCarthy of Bakersfield leading the delegation, the group has marched largely in lockstep with the Trump agenda, even in districts where Trump priorities like his American Health Care Act might adversely affect large numbers of their constituents. In the 30 votes to date in the new Congress, 10 of California’s Republicans have voted with Trump 100 percent of the time, and even Tom McClintock, the most skeptical of the group, has voted with Trump 90 percent of the time. As a bloc, they swung the health care vote. They have systematically dismantled environmental regulation. And they have been silent on immigration reform and on the border wall with Mexico, and on ramped-up enforcement actions by Immigration and Customs Enforcement (ICE).

All 14 voted for the American Health Care Act (AHCA), the House bill to replace Obamacare. Since that vote defied well-known demographics in some of their districts – for instance, reducing Medicaid in districts with hundreds of thousands of people supported by Medicaid – it could look like an admirable adherence to principle. Or, seen another way, ignoring the urgent needs of their constituents.

“I think it’s shocking that there was unanimity among California Republicans in supporting a [health care] bill that is so antagonistic to the interest of California constituents,” said Anthony Wright, executive director at Health Access, a leading health care consumer advocacy group. “There are members of the California delegation that voted for this that are far, far more vulnerable than members who voted against this in Pennsylvania or New Jersey. The only way I can explain that is McCarthy’s influence.”

Kevin McCarthy, whose position is relatively unassailable in his deep red district, was an early supporter of Trump. After Speaker of the House Paul Ryan refused to campaign for Trump in response to the 2005 Access Hollywood “hot mic” audio, on which Trump infamously said that being a star allowed him to grab women “by the pussy,” McCarthy went to Ryan to help smooth things between him and Trump. Ryan and McCarthy, along with former Congressman Eric Cantor, had formed the Young Guns GOP Program in 2007 to recruit new blood to the Republican Party.

The House Majority Leader, whom Trump has referred to as “my Kevin,” squeezed votes out of a delegation whose members had mostly stated, in public, that they had trouble committing to the AHCA. Jeff Denham of Turlock had said he was an outright “No,” expressing concerns over cuts to Medicaid and safeguarding those with pre-existing conditions. He finally voted yes, even though figures published by the Center for American Progress found that 311,200 people (including 48,000 children) with pre-existing conditions in Denham’s district would be at risk of losing their coverage under the version of the AHCA that passed; the same research organization tabulates that 51,000 people in his district would lose their coverage outright.

Similarly troubling numbers prevail in most of California’s congressional districts, leading to the hesitation of many in the Republican delegation to mess with Obamacare. David Valadao was on the fence about it, concerned about cuts to Medicaid and the elimination of the Medicaid expansion, since Medicaid (in 2015 figures) covers over one-third of the adults in his district and 64 percent of the children; Steve Knight talked about preexisting conditions and premium spikes for older Californians; Darrell Issa said he hadn’t decided right up to the last minute; even representatives from relatively conservative districts, including Paul Cook, Doug LaMalfa and Ken Calvert expressed reservations.

In several of these districts, reliance on Medicaid – or Medi-Cal as it’s called in California – is driven by skyrocketing poverty rates. The rural agricultural or desert districts represented by Valadao, Denham, Devin Nunes and Cook, for example, have high numbers of people living below the poverty line. In 2016, Valadao’s 21st District had 204,517 people living in poverty, or 30.2 percent of the population, and ranked 432nd out of 435 districts in the nation. Denham’s poverty rate was at 17.6 percent. Nunes’ was 19.9 percent and Cook’s was 21.8 percent. Constituents stand to suffer even more if Medicaid funds are pulled away.

Concerning the AHCA vote, Wright put the California Republicans in three categories: First, the early adopting representatives who passed it out of committee. Those were Mimi Walters in Energy and Commerce; Devin Nunes in Ways and Means; Duncan Hunter in Education and Labor; and Tom McClintock in Budget. The second group were what Wright called the Clinchers – the rest of the delegation, most of whom had originally waffled on their votes. Finally, there came Darrell Issa, the former doubter who cast the 216th vote that passed the bill and was in the front row at Trump’s celebration afterward, smiling and shaking hands.

“If [Trump] did not have those votes, this bill would not have passed,” said Wright.

House members approached for comment either declined to comment or did not reply to interview requests. Similarly, the RNC’s McDaniel and others at the San Diego gathering declined in-person interviews and the California Republican Party and other party offices also declined to comment.

In a speech at the RNC meeting, however, co-chair Bob Paduchik lambasted the Democrats, calling theirs a “bankrupt ideology,” saying the Democrats have gone from the party of “Yes we can,” to “No we can’t.”

The GOP clearly feels it has a mandate to pursue a purely partisan agenda, and health care is only one issue in which California’s Republican delegation has played a starring role during Trump’s chaotic first 100 days. McCarthy also ginned up votes in both the House and Senate to kill new state-run retirement savings plans being planned in eight states, including California’s Secure Choice program, thus making it more difficult for nearly seven million Californians whose employers do not offer 401(k) plans to save for retirement. And there’s much more.

“The first person who comes to mind is Devin Nunes, and his unconscionable escapades around the Russia investigation,” said Eddie Kurtz, executive director of the Courage Campaign, which has led protests and education campaigns regarding Trump immigration and health care policy in conjunction with Health Access and Service Employees International Union. “Nunes’ ability to put his party above his country really shakes you to the core.”

As chairman of the House Intelligence Committee, Nunes, who was part of Trump’s transition team, recused himself in April from heading up an investigation into Russian meddling in the 2016 presidential election. He is now under investigation for possible ethics violations after he discussed classified information pertinent to the investigation with the president before bringing that information to other members of his committee — after White House sources provided the information to Nunes. Since then, he has kept a very low profile, though he did vote for the AHCA, and for 100 percent of the president’s legislative bills so far.

As much as California’s House Republicans were out front scuttling Obamacare or knocking down Secure Choice, they’ve provided passive support to the president’s immigration and environmental initiatives – two policy areas high on the list of concerns for most Californians – simply by saying nothing.

“I’ve been hoping that, at some point the House and Senate leadership would conclude that they have to put some distance between themselves and Trump on [immigration], and I haven’t seen it yet,” said Thomas A. Saenz, president and general counsel of the Mexican American Legal Defense and Education Fund. “There is some misguided sense of loyalty. I would think that it is past time to distance themselves.”

Other than the proposed Muslim ban, Saenz pointed out, the president has not yet tried to pass new federal immigration policy. But he has greatly increased ICE arrests nationwide and has waged what Saenz called “rhetorical warfare,” whipping up fear within immigrant communities. As Trump has tried to fund his border wall with Mexico and has threatened to strip funding from California for attempting to declare itself a “sanctuary state,” representatives Valadao and Denham, among others in agricultural districts with large immigrant populations, have remained silent.

House Republicans from California, however, have rushed enthusiastically to gut environmental regulations, voting to kill an Interior Deparment stream-protection rule that prevents coal companies and others from dumping toxins into waterways, and passing the REINS (Regulations from the Executive in Need of Scrutiny) Act, which would cripple federal agencies’ ability to make any rule with economic impact, such as Obama-era safety rules proposed after the Deepwater Horizon oil spill. The House delegation voted en masse to block another Interior Department rule, requiring oil companies to police methane leaks on tribal and federal lands, a key to climate change reduction, but, surprisingly, that rule was upheld in the Republican-led U.S. Senate.

Less conspicuously, House Republicans have distanced themselves from legislation that Californians have overwhelmingly favored, including the West Coast Ocean Protection Act, which would amend the Outer Continental Shelf Lands Act to permanently ban offshore drilling off the coast of California, Oregon and Washington. Despite past Republican support for drilling bans off the coast of California – the original ban was put in place by Richard Nixon after the huge Santa Barbara spill of 1969 – not a single House Republican has joined the 33 Democratic co-sponsors of the bill.

“What jumps out at me are the sins of omission,” said a Democratic Congressional staffer who asked not to be named. “The California Republicans are supporting Trump with votes, but also with their silence on various issues.”