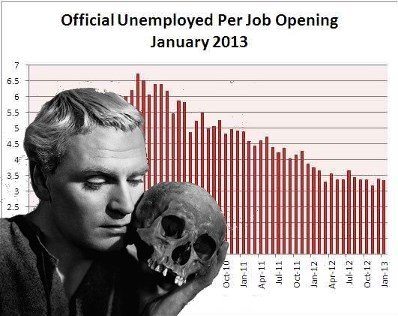 Endless debates over austerity vs. stimulus policies agitate governments. Which is “the correct” one to escape global capitalism’s ongoing crisis? The debates proceed as if official policies were key to ending crises. But the politicians’ fights over policies are mostly distractions from the main events: how crises usually end themselves and their immense social costs.

Actual government policies usually oscillate between these two anti-crisis policies or combine them in “grand compromises” amid politicians’ self-congratulations. Similar policy theater makes headlines in other countries. Government leaders act roles as economic problem solvers, as if their policies determined the outcomes of crises. Indeed, the same basic policy battles, oscillations and compromises have been repeated during each recurring business downturn in capitalist countries since 1929.

The reality of crises is quite different. Government policies actually are rather tangential, their impacts minor. Capitalism usually self-corrects its inherent, recurring downturns by depressing its production costs. The downturns usually end after and because unemployment and business cutbacks drive down labor and other production costs. When those costs fall sufficiently for capitalists to see profits from growing or starting their businesses, they invest. Resumed investments lift production and employment out of crisis. Meanwhile, heavily publicized debates over alternative economic policies rage in government, media and the academic circles. They distract the public from the immense social costs of how capitalism actually overcomes the cycles it reproduces: by unemployment and business cutbacks.

When a capitalist economy enters another cyclical downturn (nothing has yet worked to prevent them), many immediately affected capitalists reduce output, cut input orders, and fire workers. These actions distribute and deepen the downturn across the economy. Fired workers buy less and thereby hurt other capitalists, who cut their payrolls, etc. Reduced input orders from initially affected capitalists do likewise. Labor and product markets spread capitalist downturns. The depth and duration of each crisis vary with the particulars of these enterprise-market interactions.

Eventually, reduced costs of workers, inputs and required services induce profit-driven capitalists to resume or increase investment. Capitalist downturns usually produce the conditions for subsequent upturns and vice versa. We insert the term “usually” in the sentences above because sometimes a downturn’s speed and spread are so great that capitalists fear to invest even as costs decline. Then downturns persist and often become Depressions.

The social costs and pains of capitalism’s self-negating downturns are mostly borne directly by the masses of the unemployed, their families and neighbors. Homes are foreclosed; educations troubled, interrupted or abandoned; marriages and households destroyed; and so on. Because unemployed workers, bankrupt enterprises and reduced production all cut tax flows to federal, state and local governments, they in turn cut many public services just as social needs for them rise. Government budgets are strained because downturns reduce revenues while raising mandated outlays for unemployment compensation, food stamps and other “safety net” items won by workers’ struggles in past capitalist downturns.

Many people subjected to capitalist downturns sooner or later question the system. Can societies do better than a system that imposes recurring downturns and their associated suffering and immense costs? Capitalism’s defenders have rarely engaged such questioning. Instead they offer some comfort and much distraction in response to pressures from downturns’ victims. Comfort takes the form of unemployment compensation, food stamps and welfare. Distraction takes the form of public theater: well-dressed politicians inside imposing government buildings urgently debating economic policies as journalists and economists declare those debates to be important.

Even after capitalist downturns end, the political theater continues. Austerity’s champions insist that their policies ended the downturn or would have done so sooner if only they had been adopted. Stimulus advocates make parallel claims. More government spending does at least modestly counter or moderate economic downturns, while austerity usually worsens them. Nonetheless, the old debate persists. Capitalism’s downturns keep recurring and with them the need to distract those suffering the attendant pains and costs.

Downturns underscore capitalism’s wastes, inefficiencies and injustices for millions. Unemployed workers suffer alongside unused raw materials, tools, equipment and workplaces, while urgent social needs for the outputs they might have produced go unmet. In such conditions, opportunities arise to challenge the system and its supports. One such support is the distracting theater of policy debates over austerity vs. stimuli. The main strategic issue ought not to be which policy will overcome crisis. Rather, it should be the reasons behind retaining a system that imposes repeated downturns on everyone and so unjustly distributes their immense social costs and wastes.

(Richard D. Wolff is Professor of Economics Emeritus, University of Massachusetts, Amherst where he taught economics from 1973 to 2008. His post first appeared on Truthout and is republished with permission.)

Aisha Blanchard-Young: A Passion for Teaching