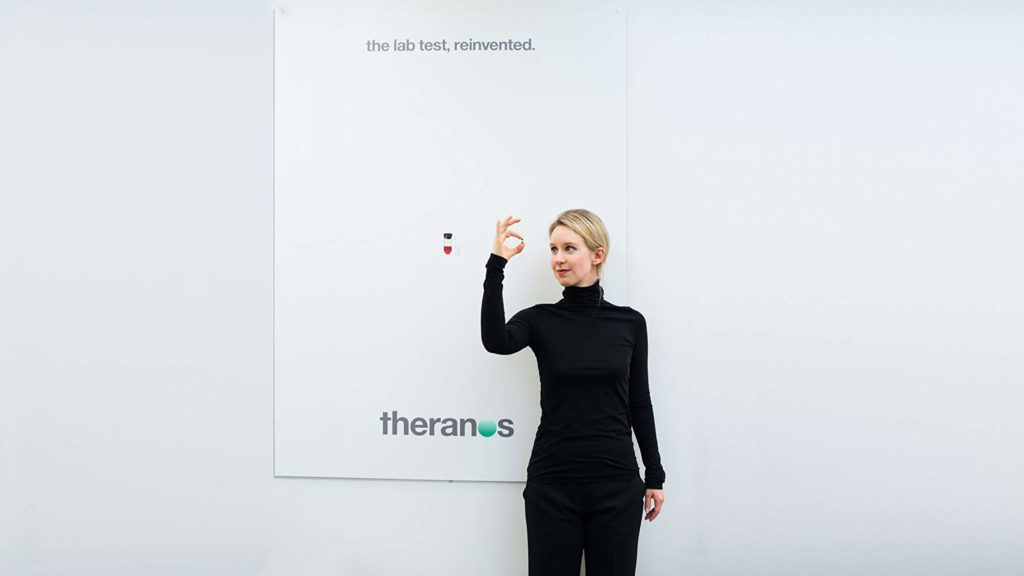 The Inventor: Out for Blood in Silicon Valley

Tomorrow’s dreams are designed in Silicon Valley. And in the last 40 years some of those ideas have blossomed into riches and fame, and, sometimes, resulted in a better life for all. In Alex Gibney’s new feature documentary,  Elizabeth Holmes personifies this quest for wealth and well-being. Her single-minded passion for a life-changing invention is contagious, but, in the end, it is a sickness that brings about her professional demise.

Holmes’ story is well known. A Stanford student who drops out in 2003, she unveils, in 2007, the prototype of a machine called the Edison that uses small amounts of blood, at a fraction of the cost of conventional needle draws, for early detection of diseases and infections. Decked out in black turtlenecks à la Steve Jobs and sporting a baritone voice (allegedly affected), the lanky Holmes is a real character: Olive Oyl reimagined by Modigliani as a tech hipster. Curiously, she rarely blinks, figuratively or literally.

Her company, Theranos, shoots into the zeitgeist and is suddenly a white-hot commodity in the venture capitalist world. Investors swarm Holmes, who appears on countless magazine covers. Partly due to her relationships with such influential private investors as Rupert Murdoch and members of the Walton family (and a board that included Henry Kissinger, George Shultz and James Mattis), Holmes raises over $700 million. She also secures a deal with Walgreens to open up Theranos wellness centers in its drug stores to service customers with her life-changing invention. By 2014, the company has a $9 billion valuation and Holmes is the millennial poster child for changing the world while also becoming rich.

There is just one problem. The technology behind Edison doesn’t exist. It never did.

There is a prototype, but, like the game Holmes was playing, it is a shell. The machine is useless in performing the vast majority of the promised tests because it is largely a figment of Holmes’ imagination (and presumably of her lover and co-conspirator, Theranos president and COO Ramesh “Sunny” Balwani).

Patients who give blood at Walgreens have no idea that when their samples are sent to Theranos labs they are secretly processed on standard blood-testing equipment. And because some of the samples are of inadequate amounts, the resulting data are often inaccurate, disseminating incorrect diagnoses to patients. Elizabeth Holmes has put the con in Silicon Valley.

One of this cautionary tale’s most fascinating aspects is just how long Holmes was able to deceive the world. It wasn’t until a 2015 Wall Street Journal article by John Carreyrou, acting on a whistleblower’s tip, that Holmes’ sham was exposed. It serves to underscore how gullible we all can be when offered a dream we want to be real.

Whether it’s the leaders of a church in Going Clear: Scientology and the Prison of Belief, hedge fund hucksters in Enron: The Smartest Guys in the Room, the eponymous doper in The Armstrong Lie, or the plethora of charlatans in his excellent Netflix series Dirty Money, Gibney has become the filmic Freud of frauds. He is a master at dissecting sparkly but flawed personalities and using their own archival material and words to crack open their dark, rotten cores.

The Inventor amalgamates a wide array of vérité tapes from Theranos’ lifespan, from internal video of staff meetings to footage shot by noted doc filmmaker Errol Morris (who was hired by Holmes to make Theranos commercials – as he had for Jobs’ Apple). Throughout the film, we see the wide-eyed Holmes expertly woo investors and try to placate a skeptical staff, as if trying to convince herself that the Edison really exists.

As it becomes clear that her scam is being exposed to the world, the delusional Holmes refuses to succumb to reality, steadfastly claiming (or perhaps idealistically hoping) that the Edison is not a work of fiction. But the gig is up, and as her dream is crumbling around her, the camera settles on a beleaguered Holmes. And she blinks. In an instant, her whole bloody invention has vanished, and the con is gone.

East L.A. Drama Lands With Humor and a Punch

Believe the Hype: A Promising Hip-Hop Drama Misses Some Beats