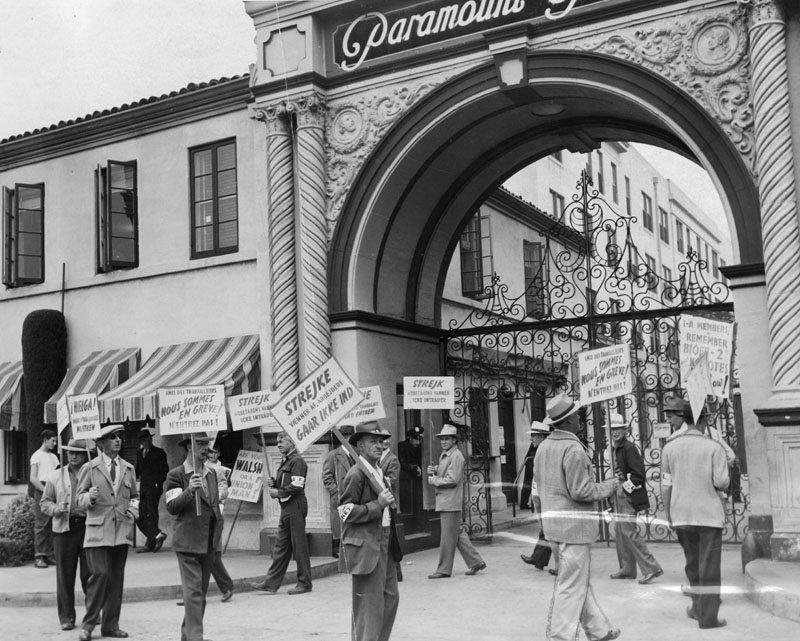 With large-scale domestic manufacturing off-shored and de-unionized, Hollywood film and television production may now be the most heavily unionized private-sector industry in the American economy. I had no idea when I started in the labor movement in the 1980s that I would get my foot in the (back) door of “the business” by working with some of the entertainment industry unions and guilds. Today’s “above the line” unions include the Directors Guild, the Writers Guild and the newly-merged SAG-AFTRA (Screen Actors Guild and American Federation of Television and Radio Artists); “below the line” unions encompass the IATSE (International Alliance of Theatrical Stage Employees – also called the “IA”), the Teamsters and others. Though I barely knew which end of the camera to look through, I was first hired-on for some interesting projects by IA Local 600 – the Cinematographers Guild. When three regional camera locals were consolidated in the mid-1990s, I wrote and edited mail-outs to members about the merger and, among other things, helped launch a national newsletter and membership directory. Through this work I got a look at the complicated web of unions and guilds that represent a mostly freelance workforce of actors, camera operators, make-up artists, writers, prop masters, grips, truck drivers, directors, script supervisors, stunt men and women, studio teachers and nurses.

Entertainment industry craft workers live in middle class neighborhoods all over Southern California. A 10- or 20-year run of $85,000 – or more – gets them a decent house on a nice block. But they can regularly face dry periods in which they’re worried about losing their health benefits (not enough work-hours to qualify) – or worse – their homes.

They’re part of the rapidly-shrinking, high-wage working-class: competitive, high-pressure and subject to global economic cycles and an all-powerful industry. They tolerate intense and perpetual career anxiety in return for a premium job with intermittent high pay and a chance at a secure retirement.

Knitting this freelance universe together are the unions. Certainly some complain that their reps don’t do enough to protect them from exploitative producers or that the contracts give the bosses too much of the pie. These bosses are no less than the global corporations that control information, news, media and entertainment, and which are among the most powerful and influential entities on the planet: Disney (ABC), Viacom (Paramount), Time Warner (Warner Bros.), Sony (Columbia Pictures) CBS (Showtime), NBC Universal (A & E) and Rupert Murdoch’s News Corp. (Fox).

Why don’t these conglomerates follow the path of the rest of the corporate world and simply do away with their pesky American unions? Maybe the arcane jurisdictional structure of the Hollywood guilds are just too entrenched to untangle and discard. Or perhaps the status quo serves another important strata of the Hollywood “elite” – the directors, writers, actors, cinematographers, editors and others – who belong to, and help govern, these unions and guilds.

Though serious problems do hamper this system of representation, most members clearly recognize that without a union they’d be fodder for industry abuse. In fact, the global media giants who run these industries are always wagging their finger at the unions to remind them how eager other regions are for the work.

City and Southern California film promotion officials have tried to keep the work in town by making it easier to acquire permits for location shoots and calming neighborhood residents who feel invaded by film crews. That has worked to an extent, particularly when coupled with the advantages of easy access to L.A.’s large talent pool and existing infrastructure such as visual effects and editing facilities. But the question remains: Can this region compete head-on with increasingly generous incentives from North Carolina to New Zealand? (The issue is complicated by the fact that location shooting – which has largely replaced the studio back lot — in various regions in the U.S. and Canada may be covered under a union contract).

Nevertheless, L.A. remains ground zero for this industry and its unionized writers, artisans and actors who give this region a creative ambiance. Working with AFTRA – I helped build ties with political and labor leaders, and raised money for an annual awards event – widened my view of working actors and other talented professionals in that union which includes broadcast journalists, radio hosts, recording musicians, sportscasters, singers and more.Talk to a costume designer or a camera operator to get a sense of what really happens on the set. You’ll find that the view from the Hollywood working class is quite distinct from the manufactured “celebrity culture” used to sell the entertainment “product.”

Much is made of the contentious and sometimes vicious battles within and among Hollywood unions. The Writers Guild strike of 2007, for example (which some say helped establish a more equitable residuals formula), was criticized by many in the IA for causing an overall drop in industry jobs.

Maybe I’m naïve, but I prefer to look at the “big picture” regarding these conflicts. As I’ve watched union power diminish and disappear across the country, the infighting in Hollywood can be construed as a sign of life. While you can argue that brutal battles inside the labor movement simply serve the employer class, the approval by union members of the actors’ merger shows a willingness to adapt and fight on.

Finally, there’s been a significant shift, I think, in how entertainment industry performers, artisans and skilled technicians self-identify. The threat of out-sourcing, job-eliminating technologies, and corporate consolidation has propelled many members to understand that – no matter how big they are – they’re not immune to being crushed by the system; that even in their relatively privileged positions, they have a great deal in common with the rest of the region’s working-class.

Above and below the line, unionized performers, grips, gaffers, keys and “best boys” – including many A-list actors, directors and writers – recognize the value and necessity of keeping this industry union. Macro economic trends and the sheer size and power of media conglomerates will exert ongoing pressure to weaken the collective nature of this workforce. But, for now at least, Hollywood holds the brand as America’s highest-profile union town.

(A longer version of this post originally appeared on LaborLou.com. It is reposted here with author permission.)

Walmart's "Downfall" and Its Fallout