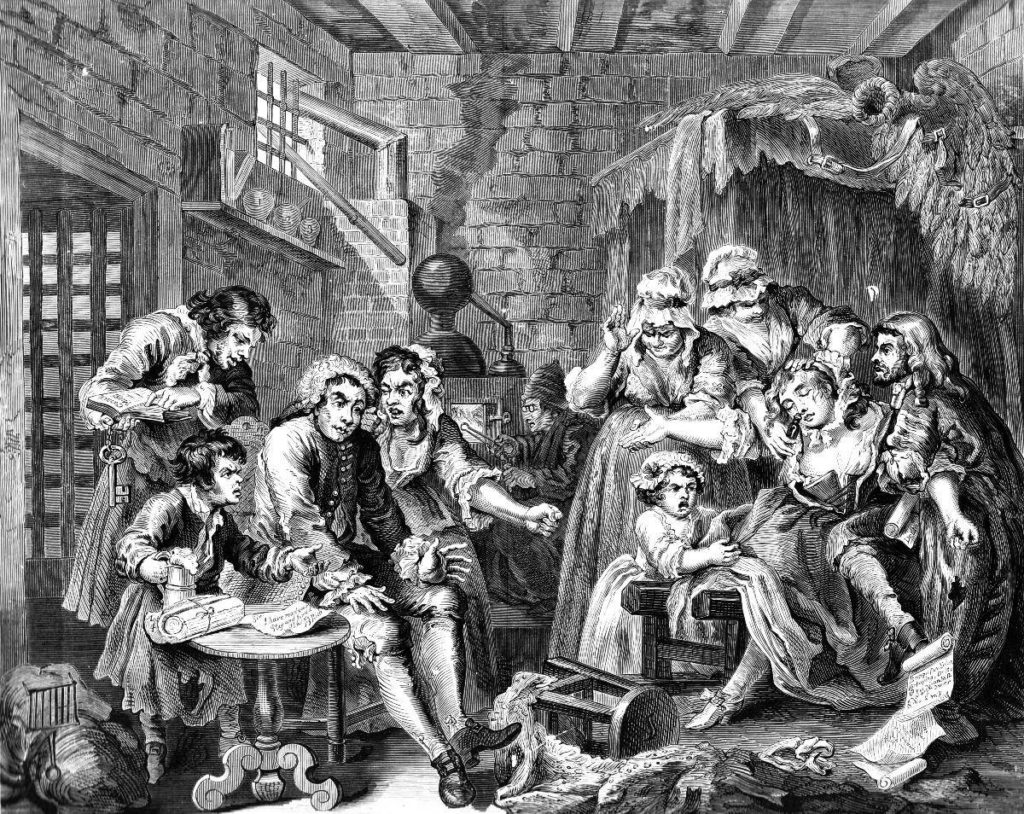 Hogarth: The Rake in debtors' prison.

Shoddy political theater distracts people with vague demons called debt ceiling, fiscal cliff and now, sequester. Party leaders posture for major donors, media boosters and the faithful. They claim to save us from the demons. Meanwhile, backstage they all agree on austerity as the “necessary” response to “our major problem,” namely federal budget “imbalance.” “We” are spending “beyond our means,” accumulating “government debts.” So “we” must raise taxes and cut spending – impose austerity – to regain balance.

On January 1, payroll taxes rose (from 4.2 to 6.2  percent) for 150 million Americans. Their checks shrank as that regressive tax became more so. Obama’s hyped “tax increase for the rich” was comparatively trivial. It affected only the very few Americans earning over $450,000, raising their top tax rate from 35 percent to 39.6 percent. Our leaders hope we forgot the 1950s and 1960s, when the top tax rate was 91 percent. On March 1, the sequester hit, unleashing federal spending cuts.

Why do “our leaders” agree on austerity (and disagree only on its details)? Why ignore that austerity not only undercuts the economy, but risks the government’s budget too? Why ignore alternatives to austerity? For example, tax the largest corporations and richest 3 percent to fund a bottom-up stimulus program. That could help balance the federal budget, directly aid most people and likely outperform the failed top-down (trickle down) policies of Bush and Obama. FDR’s policies in the 1930s provide one example to start from.

One reason for austerity: Those who lent to Washington demand assurances that the US government will honor its debts 100 percent. One key assurance is a return to budget balance after the government’s costly bailouts of major financial and other corporations. Lenders include chiefly banks, insurance companies, large corporations, rich individuals – the beneficiaries of those bailouts – pension funds and foreign governments. Those lenders’ political contributions and broad social powers usually prevail in Washington.

Another reason for austerity is embarrassment. The financial industry was a crucial cause of the crisis, starting in 2007. It benefited most from the massive bailouts in late 2008 and 2009. Those bailouts caused the budget deficits, now suddenly declared to be “our major problem.” The financial industry has been subsidized ever since. For example, it borrows from the Federal Reserve at much lower interest rates than it gets by relending the money to the US Treasury. If public discussion recognized that capitalism, crisis and the finance industry are systemic roots of our economic troubles today including the federal budget imbalance, criticism and demands for change might focus there. The system’s supporters much prefer to narrow public attention to just the budget imbalance, to “fix” it without attention to its systemic root causes.

Another reason for austerity: It is a kind of “policy mistake” often generated in and by capitalism. Two examples can make this clear. Banks and other money-lenders often encounter borrowers unable to repay their debts. In anger, lenders demand punishment for defaulting borrowers (in poorhouses, workhouses, debtors’ prisons, etc.) only to discover that imprisoned borrowers are even less able and likely ever to repay debts. Punishing those borrowers, however briefly satisfying to lenders, can hurt lenders too. So bankruptcy laws and other means emerged for lenders and borrowers to work out mutually less damaging compromises. Periodically, lenders forget, overdo punishment, and rediscover again – after much wasteful suffering and pain – the self-destruction of that approach.

The second example concerns a contradiction at the core of the capitalist system. Capitalists always try to reduce the number and pay of their employees. Saving labor costs is standard business strategy. However capitalists eventually discover that that strategy can boomerang. Reducing workers’ incomes – hiring fewer or paying them less – usually means that capitalists sell less. Reduced sales can undermine capitalists’ profits as much or more than lower labor costs raise them. Capitalist crises can, and often have, resulted from insufficient demand from workers as consumers. Nonetheless, capitalism’s competitive structure imposes the need to cut labor costs, undermining demand and generating crises. The syndrome repeats periodically notwithstanding its massive social suffering and costs and the denunciation of its critics.

Austerity policies are just like policies of imprisoning defaulting debtors and endlessly cutting payrolls. They are short-sighted: capitalists deluded into imagining that mass economic suffering will not hurt them, too. Corporations, major shareholders and top executives are now determined to (1) evade paying the taxes that could balance the federal budget; (2) secure their holdings of government debt; and (3) keep public discussion and politics away from their responsibilities for crisis, and bailouts exclusively for themselves. They push austerity policies to achieve those goals and imagine no blowback from a deteriorating economy. When Americans catch up with the Europeans, who now increasingly confront exactly that blowback, they too will rediscover and debate alternatives.

Punishing debtors, cutting payrolls and imposing austerity keep happening. The capitalist system drives its people and enterprises to return to those policies even though their huge social costs and ultimate dangers for capitalists are rediscovered repeatedly. Usually, what forces that rediscovery and suspends those policies are mass resistance and opposition from below, from victims of the system’s dysfunction. The critical question remains: When will people realize that the needed solutions are not primarily about debtors’ prisons, relentless labor cost-cutting or austerity policies? The solutions, rather, converge into one basic issue: It is time to face and change the system that relentlessly re-imposes these costly “policy mistakes” on us all.

(Richard D. Wolff is Professor of Economics Emeritus, University of Massachusetts, Amherst and a Visiting Professor in the Graduate Program in International Affairs of the New School University, New York City. His post first appeared on Truthout and is republished with permission.)

Retiring the Debt by Ending Retirement