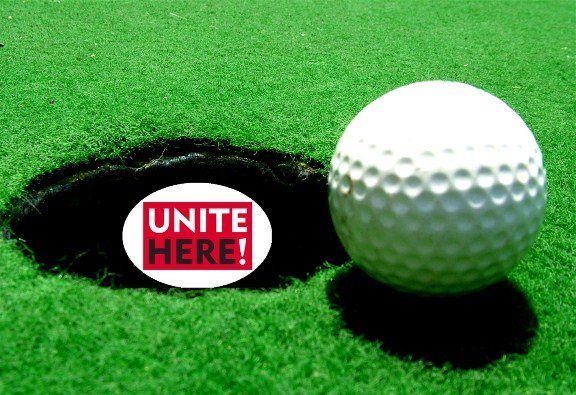 UNITE HERE!-represented workers at Pleasanton, California’s Castlewood Country Club were locked out for two years before an NLRB administrative law judge finally ruled in their favor; Castlewood was on the hook for $1.8 million in back wages and benefits due to management’s refusal to bargain in good faith and animus towards the union. Overjoyed, 45 of 61 locked out Castlewood employees returned to their jobs. There’s just one problem: they haven’t gotten their back wages yet.

The NLRB’s ruling requires Castlewood management to pay back wages within 28 days or make some other settlement with workers, but as of late December, neither had occured. Castlewood management does have the opportunity to appeal the NLRB ruling, but lacks the option of total inaction. The failure to act had workers returning to a now-familiar mode of protest on the Thursday before Christmas. The East Bay Express was on the scene:

About 30 union members gathered Thursday morning outside Castlewood’s offices to urge management to pay up. They yelled, “Pay your workers, not your lawyers,” while holding picket signs alongside a demonstrator dressed as the Grinch. Wei-Ling Huber of UNITE HERE said the union has had unproductive talks with management over plans to pay back the workers. “We’ve had ridiculous conversations about them not wanting to pay it,” she said, “but they’re going to have to.”

Castlewood employees are happy to be back at their jobs under the terms of their old contract, but also want what is rightfully theirs. Though the lockout caused immense hardship for the workers, the majority of locked out workers returned to the job in October. Now, the club’s management and board risk alienating a loyal workforce — again — because they don’t feel they should have to negotiate with a union.

Castlewood workers staged protests, pickets and demonstrations over the brutally long lockout. Last month’s protest demonstrates that they won’t give up.

A Sustainable Planet: Roadmaps for Survival