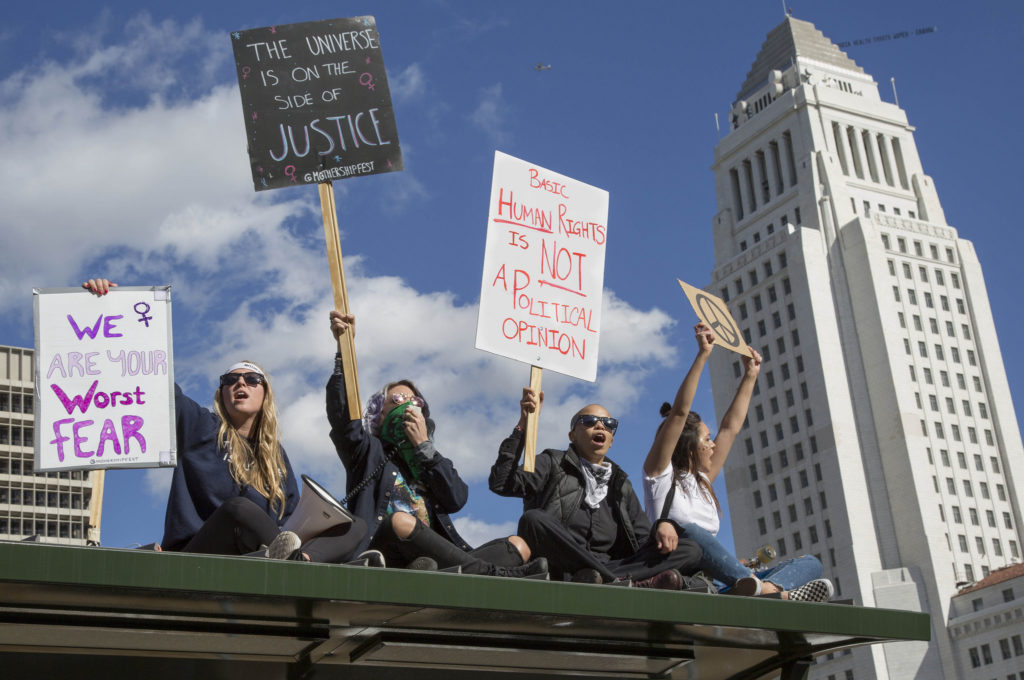 The January 21 women’s march was extraordinary in many ways, but for Los Angeles it might also have been a transformative moment. The turnout here was as much as 10 times the size of the most optimistic forecasts — estimates of the number of participants reached as high as 750,000. But how people traveled to the march sites at Pershing Square and City Hall was itself extraordinary and could make January 21 the date that transit re-established its role as central to the L.A. experience.

In the morning hours, and then again later in the afternoon, nearly every bus and rail line that headed towards or from downtown was packed at full capacity, to the point that people waited, sometimes for two hours or more, but still couldn’t board because the trains were so crowded. In my own experience, since the station for the Expo Line at Bergamot Station in Santa Monica was completely filled on the platform for the eastbound train, my friends and I decided to board the train at 8:30 in the morning going west. Its last Santa Monica stop was Fourth Street – before it reversed and headed to downtown L.A. (We weren’t the only ones with that idea.) Though our train was packed to the hilt, passengers were friendly, courteous, cheerful and boisterous, and clearly seemed to enjoy the sense that they were about to be part of something special.

This was truly a different kind of L.A. moment.

The numbers released by Metro about the number of riders on the day of the march bear that out. There were 592,000 people who boarded trains the day of the women’s march. The typical number of boarding passengers on a Saturday, according to Metro, is around 230,000. And there were more than 40,000 new TAP cards issued the day of the march, likely representing first-time users. To put that in perspective, more people took the Metro on January 21 in Los Angeles than rode Washington, DC’s Metro on Inauguration Day — and Washington is a city rightly applauded for its transit system.

Los Angeles still has a long way to go to re-establish itself as a major transit-oriented city — a claim it was able to make through the mid-1940s. But as it seeks to extend its rail (and hopefully, as well, its bus) systems, and also increase its bike and pedestrian capacity, one major barrier that remains is the idea that to get from one place to the next, no matter the distance or the circumstance or the location, one needs to travel by car. L.A. still remains a bit transit-phobic; the women’s march suggests it might become less so.

Robert Gottlieb’s latest book, co-authored with Simon Ng, is Global Cities: Urban Environments in Los Angeles, Hong Kong, and China, to be published in May by MIT Press.

“No Ban! No Wall!” Scenes from the LAX Protests