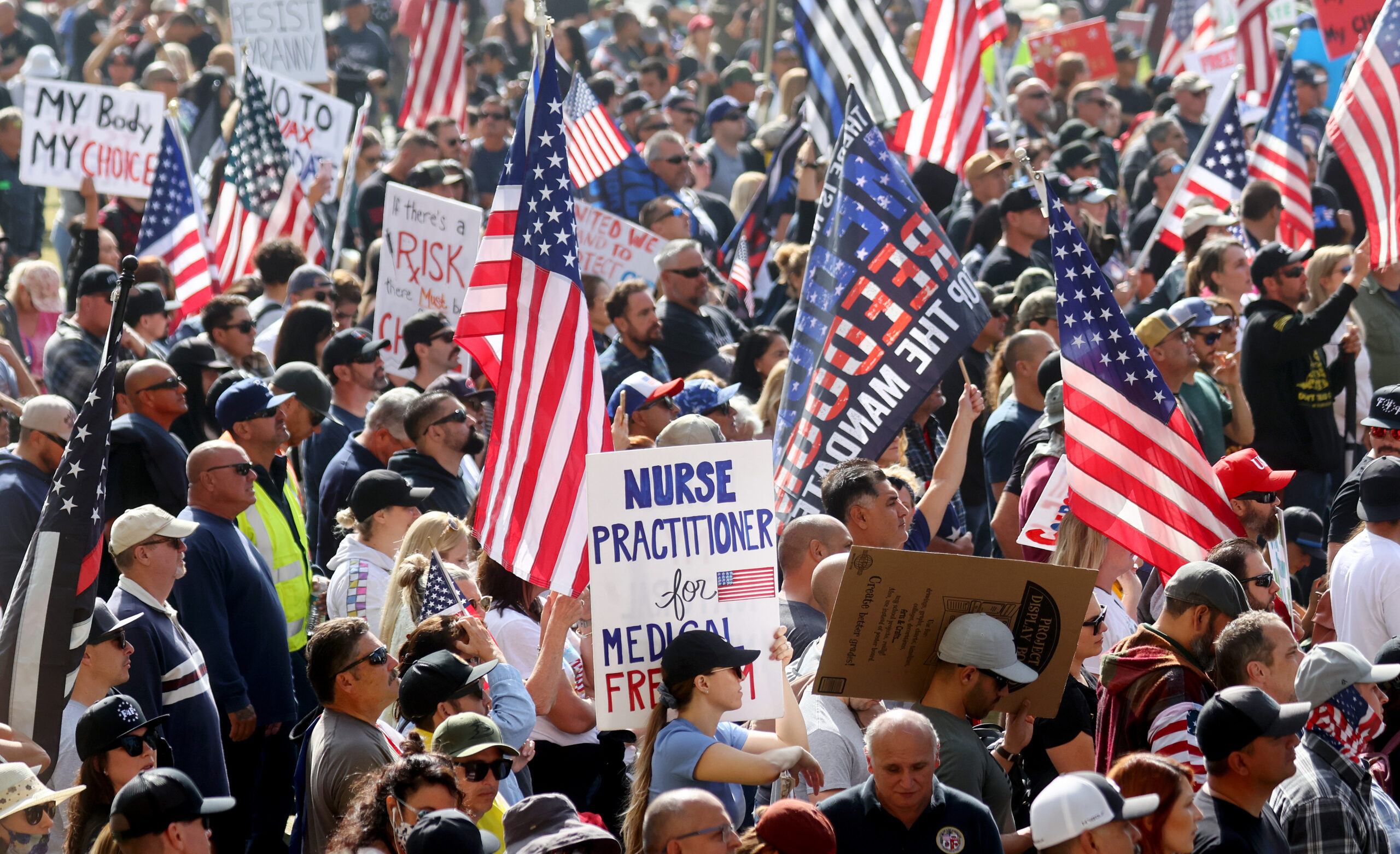 In San Francisco earlier this month, a 17-year veteran of the city’s police force died while on leave from his job. Jack Nyce tested positive for COVID-19 on a Tuesday and passed away four days later after being rushed to a hospital, his wife said. Nyce, 46, had been placed on leave for his failure to get vaccinated by Nov. 1 as required by the city.

The tragic story obscures a larger point that ought to be examined on its own: As of Nov. 2, the day after the city-imposed deadline, 97.5% of the S.F. Police Department was fully vaccinated. That is 2,747 out of a possible 2,817 workers. Even by San Francisco’s robust standards, that’s more than 20% higher than the fully-vaccinated rate for the city’s residents at large.

It is not a unique data point. Facing a vaccine mandate, 99% of Los Angeles teachers received inoculations, along with 97% of all school district employees. Roughly 73% of Los Angeles County’s residents are fully vaccinated.

“Although controversial, [mandates] are important to increase our immunity rates in a country that is fraught with vaccine politicization and misinformation.”

An NBC News survey of 20 U.S. cities, meanwhile, found that vaccination rates among municipal employees were running about 15% higher on average than they were for all residents of the cities in which they worked. The difference? In most cases the municipal workers faced a choice: Get vaccinated or risk losing their jobs.

Beyond the well-publicized protests and occasional incidents involving injuries sparked by those who’ve dedicated their time to fighting the implementation of a potentially life-saving vaccine, mandates are quietly doing the job they were designed to do: increase the number of people inoculated and decrease the risk of rampant spread of the virus.

The protests draw the coverage. The mandates get results.

“In general, vaccine mandates work,” said James Colgrove, a professor of public health at Columbia University’s Mailman School of Public Health. That is proving true in both public and private settings, as company after company comes to the realization that without a healthy workforce, it cannot function.

On Aug. 1, Tyson Foods, one of the largest meat producers in the U.S., announced that its employees had to be fully vaccinated by Nov. 1. At the time, less than half of its 120,000 workers had done so, and the company had dealt with multiple outbreaks at its processing plants. Its business was being routinely interrupted, with potentially catastrophic health and financial implications.

The mandate did its job. By the November deadline, Tyson employees had reached a 96% vaccination rate. “This is an incredible result,” Tyson CEO Donnie King wrote in a company blog. “Has this made a difference in the health and safety of our team members? Absolutely. We’ve seen a significant decline in the number of active cases companywide.”

“Has this made a difference in the health and safety of our team members? Absolutely. We’ve seen a significant decline in the number of active cases companywide.”

United Airlines says more than 99% of its workers have met its vaccination mandate, not counting those who’ve applied for a religious or medical exemption. Several prominent California-based companies, including Google, Facebook and the Walt Disney Co., have enacted vaccine mandates of one type or another.

“Places requiring vaccines for employment are seeing upticks to over 90% vaccinated,” Dr. Monica Gandhi, an infectious diseases expert at the University of California, San Francisco, told Capital & Main. “Although controversial, [mandates] are important to increase our immunity rates in a country that is fraught with vaccine politicization and misinformation.”

The courts have routinely upheld the legality of mandates, dating to a 1905 ruling by the U.S. Supreme Court that arose from the nation’s smallpox crisis. In general, as long as a health mandate is being applied evenly and does not discriminate against a specific group, efforts to find a legal loophole have failed, including most religious exemption requests.

There will always be pushback. In Los Angeles, the police union went to court in an effort to prevent the city’s vaccination mandate from applying to its members. More than 3,200 of the L.A. Police Department’s employees have been infected with COVID-19, a figure that represents about 26% of the workforce, according to the Los Angeles Times.

Mass resistance of a mandate can reduce the workforce in ways that are problematic, especially for local or state governments. As of last month, nearly 1,900 Washington state employees had either quit their jobs or been fired for failing to comply. That is roughly 3% of the state’s workforce. Said a state spokesman, “We are sorry to see that 3% go…Washington State government is a great place to work, and these positions will be filled.” Roughly 92% of the state’s employees were in compliance with the vaccine mandate.

Mandates are quietly doing the job they were designed to do: increase the number of people inoculated and decrease the risk of rampant spread of the virus.

It’s impossible to escape the politicization of this COVID vaccine, a science-denying practice that has roots in former President Donald Trump’s consistent downplaying of the virus as a genuine public health threat. Vaccine rates have begun breaking down markedly according to political affiliation, with grim results in California – part of a larger wave of “Red COVID” across the country.

Mandates certainly strike some as heavy-handed, but they’ve been used for a century-plus to help preserve the common welfare. Whether it was to virtually wipe out smallpox or prevent polio, measles, mumps and rubella among children preparing to enter the school system, vaccine mandates were largely normalized in the U.S. long before now.

The courts still uphold them. Employers increasingly approve of them. And notwithstanding a few flashpoints here and there, the mandates are doing what health officials and business owners alike had hoped they would. Protests undoubtedly won’t stop. Neither should the mandates.

The Cost of COVID Hospitalization Is on the Rise