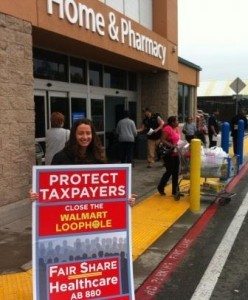 Dozens of Stockton-area workers and seniors streamed into the parking lot of the Walmart Supercenter [Thursday] morning to deliver an important message: Walmart must pay its fair share for health care.

It was the second stop on the statewide “Close the Walmart Loophole” tour.

Not even the grey sky or the rainy weather could dampen the spirits of the members of AFSCME [American Federation of State, County and Municipal Employees], UFCW [United Food and Commercial Workers], Teamsters and other unions and seniors from the California Association of Retired Americans who all came together to fight for what is right for taxpayers.

“We’re here to send a message that a few big corporations like Walmart shouldn’t get to evade the law just because they have an army of lobbyists on their side. We are standing up for taxpayers and for what it right, and that means we need to close the Walmart loophole.”

A coalition that includes doctors, nurses, health care advocates and others has come together to close the Walmart Loophole by passing AB 880. The bill, sponsored by Assemblymember Jimmy Gomez, would protect taxpayers from unscrupulous companies like Walmart that plan to evade their responsibilities under the Affordable Care Act. Walmart and other big retailers and restaurant chains have found a loophole in the ACA that will not only let them avoid penalties they’d pay for not providing care to workers, but also pump up their already sizable bottom lines by dumping their health care costs onto taxpayers.

We handed out flyers to shoppers letting them know who’s picking up the tab for Walmart’s share of employee health care costs: all of us. The shoppers we met were pretty shocked to learn [it is] small businesses and individual taxpayers who are on the hook when Walmart dumps its workers onto the state Medi-Cal program by cutting hours and wages. Check out more photos from the action here.

According to Matt Richard of Sheet Metal Workers Local 104:

“We’re ready to go to every corner of the state to let lawmakers and their constituents know what is at stake if we don’t close the loophole. We’re demanding that legislators stand up for taxpayers and support this common sense bill to make sure Walmart pays its fair share for healthcare.”

Symbolizing the hefty price we all pay for Walmart’s evasion of its responsibilities, we also took a giant invoice for $32 million inside the store and asked the manager to send it straight to Walmart’s CEO. He earned $28 million last year as he oversaw Walmart’s plans to stick taxpayers with the corporate giant’s health care costs, so we think it’s only right that he know we aren’t going to stand for paying Walmart’s bills. Already, Californians pay $32 million a year for Walmart workers’ healthcare, and that cost will balloon as Walmart exploits a new loophole in the Affordable Care Act.

Walmart wrote the book on exploiting taxpayers while undercutting low-wage workers’ ability to provide even the basics for their families. Walmart counsels workers on how to sign up for public assistance when they are hired — an admission their wages are so low, workers can’t expect to get by on them, much less pay out of pocket for healthcare. As the ACA rolls out fully in 2014, research from U.C. Berkeley shows the number of workers from the state’s biggest employers — especially retail giants and restaurant chains — who are dumped onto the state health care rolls could reach 400,000 if legislators don’t act to close the Walmart loophole.

AB 880 makes Walmart and other large employers pay their fair share, assessing a penalty to cover the costs of health care for the workers who are dumped onto Medi-Cal. Only the largest employers will be fined; small and mid-sized businesses are exempt. Importantly, money from the fines on big, profitable companies will be used to invest in the beleaguered Medi-Cal system, enabling California to expand access to health care for the millions of people in need.

Join us! For more information on our campaign to close the Walmart loophole, visit: www.closethewalmartloophole.com

(Tim Robertson is an organizer with the North Valley Labor Federation, and is the former director of the California Fair Trade Coalition. His post first appeared on Labor’s Edge and is republished with permission.)

Related Topics:AB 880Walmart
Up Next