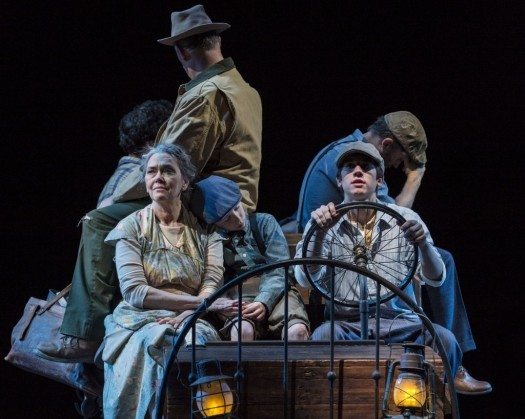 Don’t miss this inspiring theatrical adaptation of The Grapes of Wrath, the rabble-rousing, pro-union Depression-era classic that, alas, remains as timely now as the day John Steinbeck wrote it in 1939. With imaginative mise-en-scene, sets, props and an integrated use of live music, A Noise Within’s production brings the Homeric, heroic odyssey of the Joad family from Oklahoma to California vividly, memorably alive.

Forced off of what had been the family farm for generations by a calamity worse than the Dustbowl — greedy bankers — the displaced Joads join the “Okie” trek to California in their decrepit truck (which is assembled onstage like a jalopy jigsaw puzzle that even assembly line maestro Henry Ford would marvel at). The company creatively expresses the Joads’ long march as they go westward ho! on the thrust stage of A Noise Within’s beautiful new space. But once they reach California’s land of milk and honey, with the low hanging fruit in its fabled orchards waiting to be plucked by migrant laborers, the Joads’ journey really begins, as these ordinary salts of the earth become embroiled in a strike and the workers’ struggle for a decent life. So much for California dreaming!

One of the great things about Noise’s rendition of Grapes, which was adapted for the stage by the Steppenwolf Theatre Company’s Frank Galati circa 1990 (for which he received two Tonys), is that this Pasadena production boasts a big cast of about 20 actors. This is only proper since Grapes is a mass drama with action ranging from square dancing to squaring off in deadly fights.

With such a large, excellent cast clad in period costume please forgive this reviewer for being able to just single out for praise a few of the thesps. Deborah Strang steals the show as Ma Joad, the moving matriarch who is the no nonsense glue that holds the clan together as they face and battle adversity. Strang may not have the physical heft of Jane Darwell — who unforgettably played the part in John Ford’s immortal 1940 screen adaptation for which both Darwell and Ford very deservedly won Oscars (it was nominated for five other Academy Awards, including Best Picture) — but Strang certainly has the artistic breadth to convincingly, poignantly portray this beleaguered earth mother who is hanging on for dear life. Strang’s Ma Joad may not be touchy-feely but she is love — albeit tough love — incarnate. Steinbeck gave Ma great lines, which Nunnally Johnson’s splendid, Oscar-nominated screenplay repositions to the denouement of the movie, and which Strang poetically invokes earlier onstage: “We’re the people…”

I once met David Carradine at the DGA and when I blurted out “Preacher Casy rules!” he gave me a big knowing grin. The greatest role his father, John Carradine, ever played was arguably Jim Casy, the more or less defrocked clergyman who finds in the union what he had lost in religion. The wonderful thing about Matt Gottlieb’s depiction of this uneducated but intellectual-prone (if cornpone) Midwesterner is that the ex-preacher is really taking it all in and trying to figure it all out: As capitalism collapses, what is to be done? Gottlieb’s quirky Casy is idiosyncratic and full of eccentricities — all too human, although he has a touch of the Jesus of liberation theology about him. Bravo, Mr. Gottlieb — what better complement than to say you did your character proud? Not to mention his author.

Lindsey Ginter as Pa Joad has a much stronger presence than the unmanned Russell Simpson had in the film version, wherein Ma started wearing the pants in the family, so to speak, and Pa was emasculated and eclipsed. Jill Hill and Gary Ballard are delightful as Granma and Grampa Joad, who provide some comic relief in this grim saga.

If Henry Fonda as Tom Joad was the proletarian protagonist in Ford’s film, in this production Steve Coombs’ Tom is less central. Perhaps because this is more of a mass drama and ensemble piece. In any case, Coombs acquits himself well as the ex-con who delivers a knockout punch to a deputy, as well as one of the grandest speeches in 20th-century American literature.

Like Tom’s near oration as (plot spoiler alert) he farewells Ma Joad, Steinbeck’s theme is that of solidarity. If you think you know this harrowing, powerful saga from just the movie, but have never read the book or seen the stage version before, guess again. The hitherto blithe Rose of Sharon’s (Lili Fuller) act of compassion at the end, which I will not reveal here but which is not to be missed, is Steinbeck’s luminous way of saying that when the going gets tough, the ordinary folks, the fabled people, will stick together, through thick and thin, come hell and (literally) high water. And that is what will save the salt of the earth: Unity.

Steinbeck’s insight and brilliance was, at the height of the Depression to posit that the transcendental notion of “oneness” was to be found not in some pie in the sky mumbo jumbo but in the labor union. To paraphrase Casy, who first realizes this [before] Tom finally does: “Maybe a man doesn’t have a soul of his own but is part of one big soul.” In other words, as someone else eloquently put it: “Workers of the world unite.”

The only reservations I have about Michael Michetti’s expertly directed ensemble piece is that at almost three hours long, you almost feel as if you’re with the Joads as they crawl their way cross country. Nunnally Johnson’s adaptation of Steinbeck’s sprawling, epic novel — my paperback copy weighs in at 619 pages — cuts through a lot of the fat that may work on the page but not necessarily onscreen or onstage. Galati’s version is a bit too wordy and long and could be cut by about 20 minutes or so.

But this is a mere quibble about grandeur. More workers are unorganized now than when Steinbeck’s immortal masterpiece about the wretched of the earth was first published. This play about the mystical union of the people remains as relevant as ever, a highly entertaining, enlightening drama to lift your soul and connect it to the rest of our fellow downtrodden struggling humanity. If you see only one play this season pick The Grapes of Wrath — and then join a picket line.

Ed Rampell is a Los Angeles-based film critic/historian and author (Progressive Hollywood, A People’s Film History of the United States). His post first appeared on LA Progressive and is republished with permission.