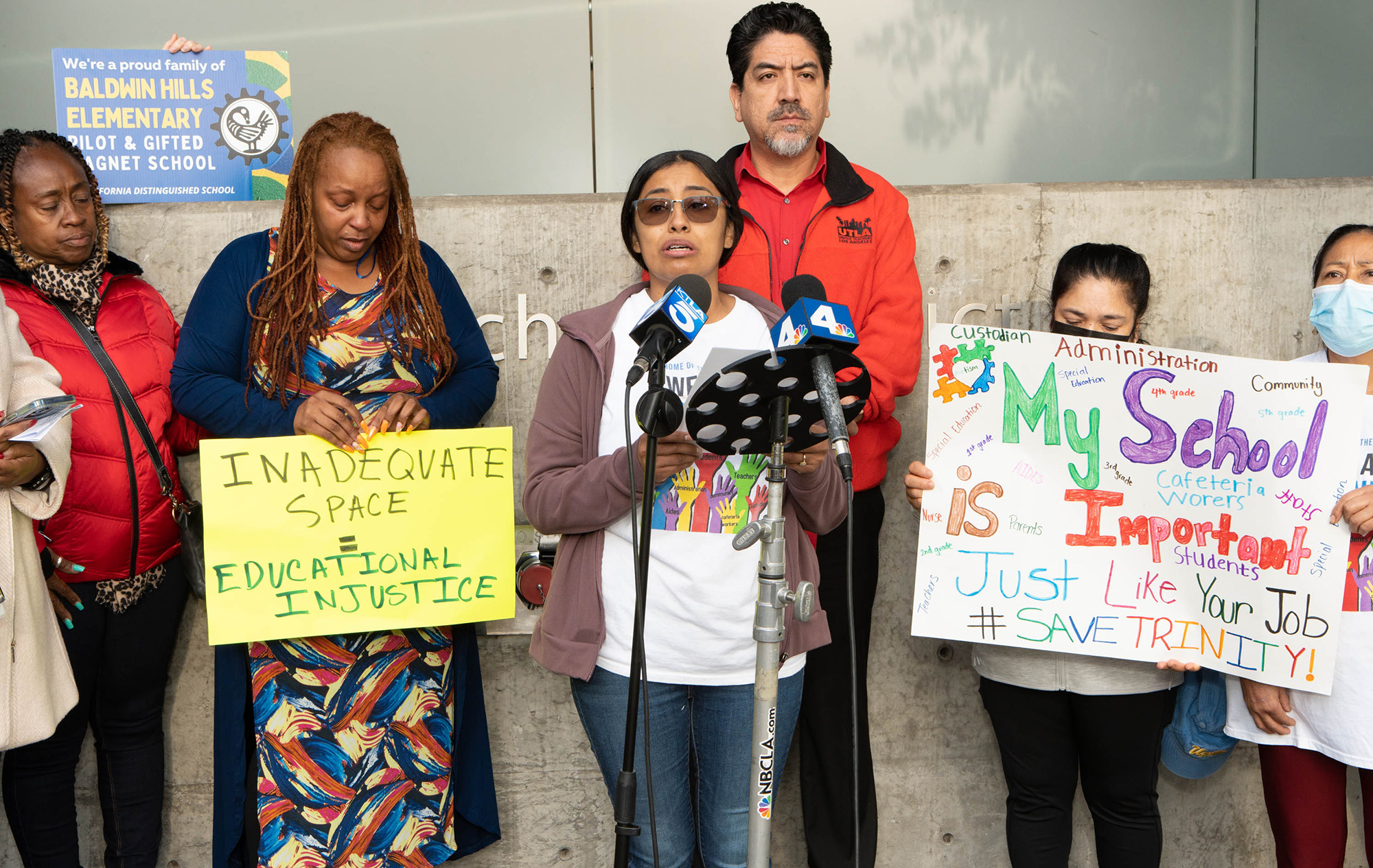 Yuvicela Ruiz, parent of a Trinity Elementary School student, speaks to reporters at a protest outside of a LAUSD board meeting on November 1. Photo by Isabel Avila.

In the Los Angeles Unified School District, some 50 public schools share their campuses with charter schools. It is often a contentious relationship. But now parents and teachers at Baldwin Hills and Trinity elementary schools in South Los Angeles, asserting that such arrangements jeopardize their children’s education, are demanding the Los Angeles Unified School District board end them for the 2022-23 school year. Baldwin Hills Elementary shares its campus with New Los Angeles Charter Elementary School, while Gabriella Charter School 2 is located at Trinity Elementary.

Students at Baldwin Hills take violin lessons on the playground during recess because there is no other space, said Jacquelyn Walker, Baldwin Hills’ community school coordinator. A program that offers fresh produce and clothing to kids and families who need them was forced to move to a nearby school for the same reason, Walker said. Private rooms are sometimes unavailable for counseling kids and families in crisis.

“We lost our computer lab,” said the Rev. AmberMarie Irving, DD, whose son is a second grader at the school. “If that happened at a majority Caucasian school, all hell would break loose,” Irving said.

“We’ve worked tirelessly to find a permanent home that is not on an LAUSD campus,” said Brooke Rios, executive director of New LA Charter School, which has about 198 students on Baldwin’s campus, according to Rios. “We’re aware of the tension,” she said.

Designated a 2020 California Distinguished School, Baldwin Hills is one of just three elementary schools in the district with a majority African American student body that includes a magnet school for gifted students. The school emphasizes science, technology, engineering, arts and mathematics. It boasts robotics, engineering, yoga and chess classes, and higher than average test scores. But teacher Marie Germaine said the district has undermined the school’s efforts with the space sharing arrangement. “They want us to accept our own suffering and our own demise. We refuse to accept it.”

Germaine, Walker and Irving were among parents and educators from Baldwin and Trinity who demanded the district get charter schools off their campuses when they addressed the school board on Nov. 1, the deadline for charter schools to request space on district campuses for the upcoming school year. Baldwin and Trinity are both among some 34 LAUSD community schools that are designed to be neighborhood hubs, offering services to children and families after traditional school hours. United Teachers Los Angeles treasurer Alex Orozco said that in 2019, the district agreed to avoid co-locating charter schools on such campuses, but hasn’t done so.

Trinity Elementary is at the other end of the achievement spectrum; it is struggling as one of 100 schools that LAUSD Superintendent Alberto Carvalho has targeted for improvement, said teacher Tanya Flores. However, Flores said it is hard to improve when kids do not have adequate space for learning. A fifth grade class meets in the auditorium and a section of the school library serves as a makeshift second grade classroom, she said.

Parent Yuvicela Ruiz said when her fifth grade son’s special education class was moved to another school because of lack of space at Trinity, “it hurt him academically and emotionally. It showed that my son’s education is not valued by the district,” she said.

Relationships between charters and the traditional schools with which they share space have long been fractious. Sharon Delugach, chief of staff to school board member Jackie Goldberg, said sharing campuses can be “like having a really horrible roommate.” Delugach said few co-locations are successful. “There are places where they’ve managed to have a civil relationship, but there’s rarely a positive one.”

Still, the district has treaded lightly because charter schools have been quick to sue over denials of space. The current tug of war between charters and traditional schools over on-campus real estate began with Proposition 39, approved by the voters in 2000, which says school districts must share available space by renting it to charter schools.

The California Charter School Association has been vigilant in ensuring districts do so, filing suit against LAUSD in 2007 and 2010 for the district’s alleged failures to comply with the law. The group sued the Oakland Unified School District over similar issues in 2016. Ricardo Soto, CCSA’s chief advocacy officer and general counsel said, “The biggest issue for a charter to run programs successfully is facilities. Finding adequate and high-quality facilities is one of the top priorities for CCSA.”

“No one thinks this [charter co-location] is an ideal solution,” Soto said.

Union-backed candidate Rocío Rivas, PhD, who finished the June primary ahead of Maria Brenes 44% to 30% in East L.A.’s District 2, has promised to push for charters to co-locate with other charters before moving onto traditional school campuses. Rivas and Brenes are vying to replace termed-out board member Monica Garcia, a charter supporter. Brenes is supported by charter school backers, whose Independent Expenditure committee has spent $2.7 million on her behalf, while the union’s independent expenditures total $2.6 million on behalf of Rivas.

However, Brenes said she doesn’t believe charters should expand currently as LAUSD enrollment is low. “I would also work to see the district do more to address very valid co-location tensions and concerns,” she wrote in a text message. Brenes said in the past, she has joined parents to block co-locations at schools that planned to use space for community services, like wellness centers. “I worked very closely with all parties involved to help move our district toward a solution that respected the needs of our students, families, educators and community,” Brenes said.

Regardless of the outcome of the election, charter co-locations will likely remain a thorny issue.

At Baldwin Hills Elementary, Marie Germaine said, “We need for them to meet with parents and teachers and spend the time to work for us instead of working to suppress us and our needs and concerns,” she said.

A Remedy for Public Schools Catches On