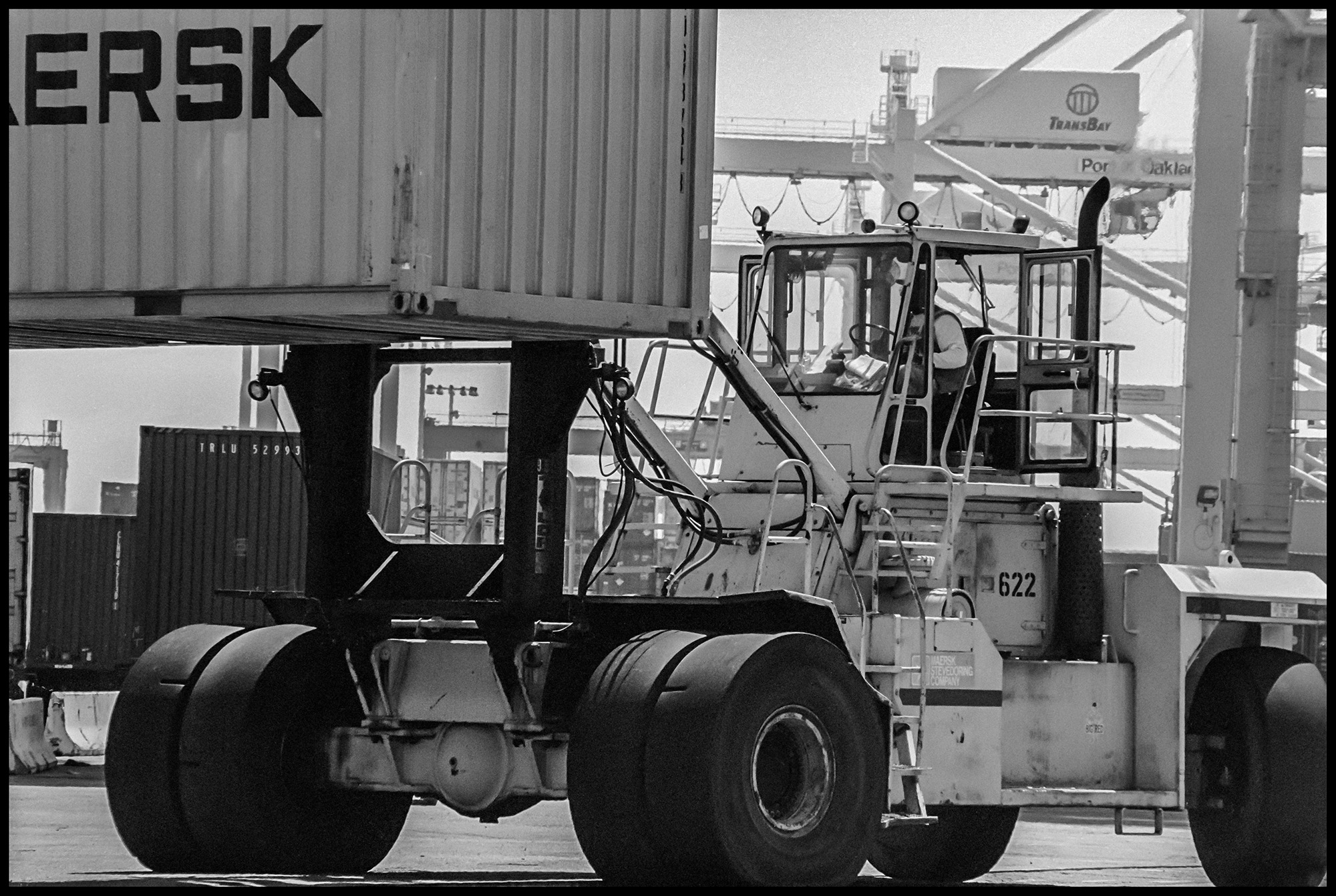 At the peak of last year’s supply chain crisis, the typically invisible operations of the nation’s ports came under a glaring media spotlight. But with the focus on consumer frustration, little attention was paid to whether massive public investment in the ports was producing commensurate benefits to the public.

A report released last week raises a host of questions about the country’s largest port complex — the ports of Los Angeles and Long Beach. Produced by the Economic Roundtable, a nonprofit research group, “Someone Else’s Ocean” looks at the role of the ports and the overall labor force, the California economy and the public benefits that the ports are required to provide under law. The report was funded by the International Longshore and Warehouse Union (ILWU), which is currently negotiating a contract with the Pacific Maritime Association, an employer organization representing the companies that run the shipping lines and operate the cargo terminals in all U.S. mainland ports on the Pacific Coast. The last contract between the union and the companies, negotiated in 2015 and extended in 2019, expired on July 1, creating a big pile of issues that dockworkers want resolved. One of the thorniest is the impact of automation on the docks, which is especially sharp in Los Angeles and Long Beach, where two terminals have already been automated.

Capital & Main spoke with Daniel Flaming, president of the Economic Roundtable, about the outsize impact of the ports and the effort to protect the interests of adjacent communities. The interview has been edited for length and clarity.

Capital & Main: The report says that three international shipping alliances control 83% of container movements around the world. It sounds like longshore workers are David facing a global Goliath.

Daniel Flaming: These aren’t mom-and-pop operations doing stevedore work. These are under the control of companies in Asia and in Europe. They’ve been exempted from antitrust law in Europe, so they’re able to set shipping fees collaboratively rather than engage in competition. They juggle cargo between ships of different lines and coordinate schedules. In effect, they’re able to operate as a gigantic single company to their own great profit. So, it’s very difficult for a small group of workers to negotiate their survival and favorable employment terms with these giants.

The report says dockworkers in San Pedro Bay earn an average hourly wage of $62.44. What impact does this high level wage have on local communities in the San Pedro and Los Angeles area?

It has a powerful, multiplier effect. It enables the workers themselves to be homeowners in many cases, rather than precariously housed. In Los Angeles, as well as the Bay Area, that’s not a trivial matter. And in the San Pedro area, the immediate area around the ports, the buying power of dockworkers accounts for about 34% of consumption by the community — restaurants, doctors, grocery stores, hardware stores. That makes ILWU members an important economic force in the community.

“The ports are publicly owned. People who work there should earn a decent living.”

Yet the report also states that union longshore workers are making $89,560 a year, while workers in local communities overall are making $34,345, which is an enormous difference. Doesn’t this make longshoremen an island of high wages in a sea of low wages? What should the union do about this?

Nearly three quarters of shipping containers leave the port empty. They come in full and go out empty. Those outgoing empty containers could be filled with goods we might make, including high-tech products. So, in terms of the relationship between higher-wage dockworkers and the lower-wage workers who are their neighbors, part of what we recommend is that the port should support durable manufacturing industries — export industries.

In addition, the truckers who come in and out of the ports make up the biggest body of workers whose jobs are linked to the docks. They work very long hours for a little over minimum wage. Yet the ports are a capital-intensive environment, which means a lot of money is invested in equipment and in cargo, and the ports are publicly owned. People who work there should earn a decent living. The port truckers should earn at least the prevailing wage for construction truck drivers.

One of the hardest-fought issues in negotiations between longshore workers and the shipping companies is the automation of the docks. Can you detail the job losses that have been caused by automation in Long Beach and Los Angeles? 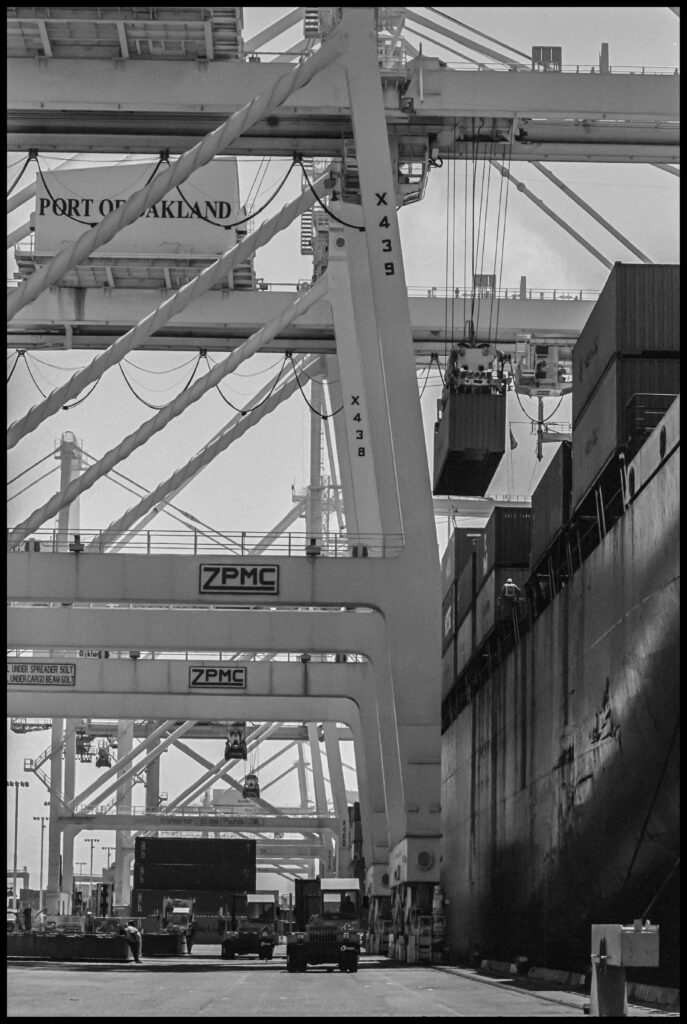 There are two automated terminals in the ports, one in Long Beach, one in Los Angeles. The automation began at both in 2012 and was completed in 2015. In Los Angeles, the terminal is called TraPac, which stands for Trans-Pacific Container Corporation. That terminal received a public subsidy of 40% of the cost of automating operations, which is not legal. The terminal’s lease was negotiated, and afterwards the port paid for the cost of automation without raising the lease rate. In Long Beach, they took two outdated terminals, filled in the ocean between them, and created one much larger automated terminal.

We estimated that 582 jobs were lost at these two terminals — jobs that would have existed if they hadn’t automated. If automation spreads to more terminals, those losses will be much larger.

Presumably, this is what terminal operators want — to eliminate jobs as a way of eliminating costs, right?

Well, automation is very expensive. It was a billion and a half dollars to automate the Long Beach container terminal, and close to $700 million to automate TraPac. One governmental body, the International Transport Forum made up of 34 countries, says there’s a 7% to 12% loss in productivity at the automated terminals because they lack a steady rhythm of cargo movement.

“It takes billions of dollars in infrastructure to move cargo out of the Los Angeles ports, and you just can’t replicate that overnight somewhere else.”

What could the ILWU propose in negotiations that would put a break on job losses?

Their existing agreements call for maintaining the labor force, but our report shows, in fact, that jobs have been destroyed. That’s an issue they can take to the bargaining table. They can also act through city government and state government to preserve jobs. The argument we make is that there is no local benefit from automation. It eliminates jobs.

The equipment is made in China or Germany. If there are profits, they go to Europe or Asia. Local communities pay a high cost through the impacts of all the truck and rail movements. There are lots of diesel emissions, which are a health risk, as well as noise and uncompensated road wear. Local communities simply lose through automation.

Do the port commissions also have the ability to determine how much automation is going to take place?

The terminals are publicly owned, so reconfiguring the equipment or infrastructure requires port commission approval. So, the commissions do have the ability to say, “No, we don’t want that done to our property.”

Couldn’t the shippers just move cargo operations to other ports if Los Angeles tries to put the brakes on automation?

About 35% of what comes in through the port is consumed in what they call the local region, basically the sprawling Southern California area. So, this is the consumption center for cargo. The ports that are raised most often as competition are in British Columbia. It just baffles me how you could unload containers in British Columbia, get them across the Puget Sound and truck them or send them here by rail. The infrastructure doesn’t exist to do that. It takes billions of dollars in infrastructure to move cargo out of the Los Angeles ports, and you just can’t replicate that overnight somewhere else.

At one point, there was some thought that ports in Mexico might go into competition with Southern California ports.

That was the story before the British Columbia story. It’s the same issue of infrastructure. The San Pedro Bay ports are populated with scores of huge container cranes and rail and truck facilities. It would take many billions of dollars to replicate that. Then you would have to transport the goods across the border into this region. This is rhetorical saber rattling, and it’s used to intimidate ports to make them compliant.

“Ports are treated as a business extension of the shippers, but they are obligated to act on behalf of California residents.”

What could the ports do to encourage more manufacturing here and more exports?

There was a very large public investment in what’s called the Alameda Corridor — a subterranean freight line that moves cargo out of the ports. It runs through Los Angeles’s Rust Belt, the area where we used to have tire factories, steel factories and automobile assembly plants. No one asked, “Could we connect this line to these large manufacturing sites the trains are running past?”

The ports have enormous locational advantages. They can simplify inventory operations, they can reduce touch points moving cargo, they can make things move more quickly, they can give discount rates to exports. We recommend that the ports talk individually to durable manufacturing industries and listen to their needs.

You also suggest that if it became more expensive to export — if there were a surcharge, for instance, placed on empty containers leaving the port — that also might encourage shippers to fill those containers up with something. Presumably, that something might be products manufactured in Los Angeles.

Or California. Right now, the Port of Los Angeles discounts fees on containers if they’re empty. We’re subsidizing the shippers sending empty containers. The Port of Long Beach has a discount for exports, but because most outgoing containers are empty, it’s not doing much good.

The ports could rethink the rate structure so that it benefits the broader economic fabric of California rather than simply meshing with the import needs of these big shippers. Ports are treated as a business extension of the shippers, but they are obligated to act on behalf of California residents.

What are the costs of running the ports that the shippers are not paying for, and that the public does?

The picture to keep in mind is of congested freeways and big trucks. The biggest costs are from accidents, and from uncompensated road wear that the fuel taxes and the license fees don’t cover. There are costs to residences from noise. There are health costs from the emissions that in the immediate port area create a higher risk of cancer. And there are also global costs from greenhouse gases and from climate change.

Related Topics:AutomationFeaturedPort of Long BeachPort of Los Angelesport truck drivers
Up Next