The site of the planned Avenue 34 Project development in the Lincoln Heights neighborhood of Los Angeles. All photos by Ted Soqui.

That’s because the site sits adjacent to Welch’s former industrial dry cleaners that operated for nearly 70 years. During that time, massive amounts of toxic chemicals and solvents, including possible carcinogens like trichloroethylene (TCE) and perchloroethylene (PCE), leaked or were dumped into the soil and groundwater, requiring extensive cleanup. The Department of Toxic Substances Control (DTSC) recently ordered the developers to conduct tests on the proposed building site, which detected elevated levels of these same chemicals, among others.

A group of local residents and environmental advocates, however, insist that if it hadn’t been for the concerted pressure they placed on the DTSC, construction on the project would likely have already started with a different soil testing plan that left the community potentially vulnerable to toxic exposures.

“The DTSC did not fulfill their responsibility,” says Angelo Bellomo, former deputy director for health protection for the Los Angeles County Department of Public Health, about the agency’s job policing the site. Indeed, just last November, the DTSC wrote that it “does not believe that residual chemicals in soil or groundwater beneath the Former Welch’s Uniform Facility pose a risk to future occupants” at the proposed development. Further evaluations are believed to have begun to better understand the scope of the potential contamination.

The story of Avenue 34 unfolds at a time when the city and state are grappling simultaneously with a dire need to provide housing for a vast homeless diaspora and a filthy industrial legacy left by businesses that have been poorly regulated for decades. More pointedly, the competing forces behind Avenue 34 — a fervent push toward inner-city building along with concerns over lax regulatory oversight — also capture the kinds of arguments surrounding state plans to clean up many other polluted lands dotted around California.

There are roughly 7.1 million Californians living in poverty, while some 58% of low-income households fork out more than half of their income to keep a roof over their heads.

Back in May, Gov. Gavin Newsom earmarked $500 million in general funds for the DTSC to accelerate cleanups on brownfield sites — polluted areas that require remediation before being repurposed — to potentially pave the way for affordable housing developments. That multi-year pot of money was missing from the budget lawmakers passed earlier this month after pushback from environmental groups opposed to the idea of mopping up dirty sites for housing. They pointed to the DTSC’s involvement at other troubled toxic cleanups, like the massive residential remediation around the former Exide lead-acid battery recycling plant near East L.A., and the radioactive cleanup at the Santa Susana Field Laboratory outside Simi Valley. Nevertheless, it’s still on the table as lawmakers thrash out the particulars of how these sites will be used once they’re remediated — negotiations that are closely linked to long-gestating plans to significantly overhaul the agency.

“I’m all for working on a system that gets [environmental justice] groups comfortable,” says Michael Lane, state policy director with the nonprofit San Francisco Bay Area Planning and Urban Research Association. “But we can’t just give up on these agencies and say we oppose funding because we can’t trust them. Let’s get to a system where we can trust them.” 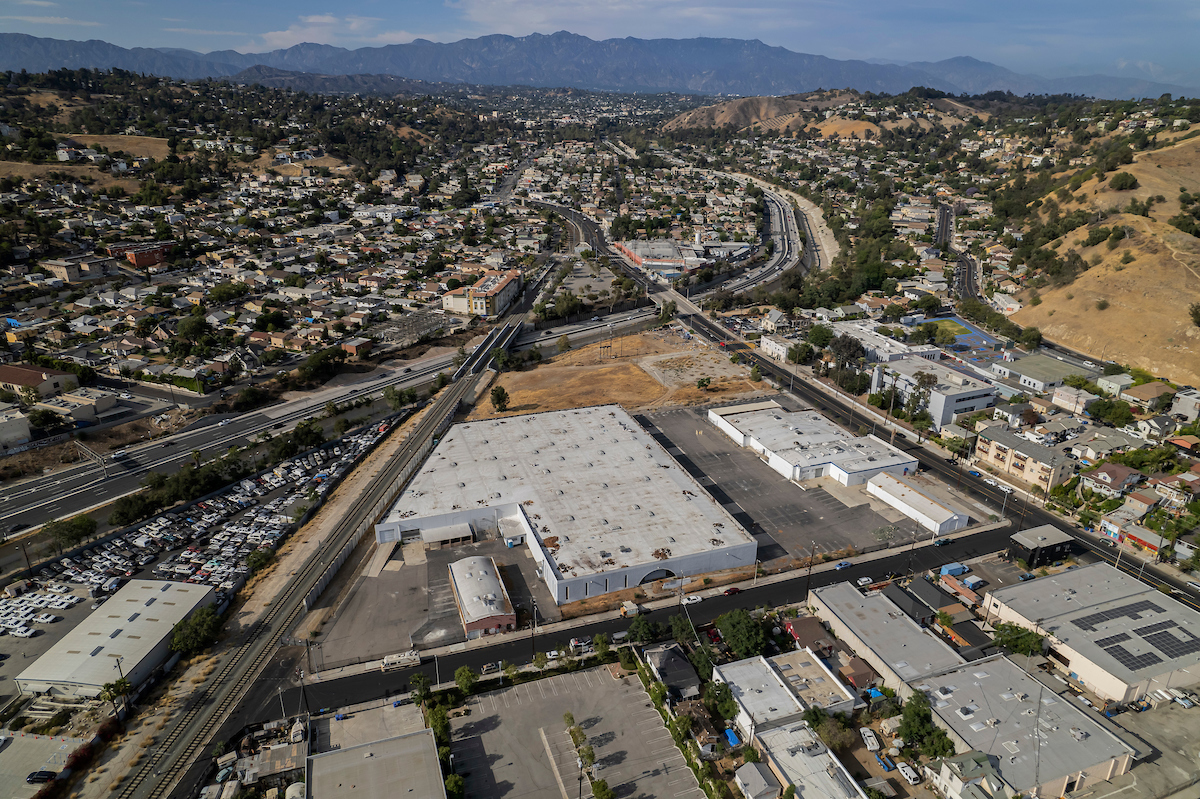 Aerial view of the site of the proposed Avenue 34 Project development in the densely-populated neighborhood of Lincoln Heights.

The affordable housing problem in California is staggering. The last L.A. County homeless count, in January of 2020, found 66,433 homeless people across the county, a nearly 13% increase from the previous year. A federal report from last year estimated that California’s unhoused totalled 161,548 people, a 7% uptick from 2019. Other impacts from the crisis are just as deeply felt. There are roughly 7.1 million Californians living in poverty, while some 58% of low-income households fork out more than half of their income to keep a roof over their heads. People of color are hit especially hard.

At the same time, California is sitting on tens of thousands of brownfield sites, though it’s unclear exactly how many. Top DTSC officials use a 200,000 figure taken from a 2007 Center for Creative Land Recycling report. The EPA, however, estimates a more conservative 90,000. According to the DTSC, the agency is currently working on over 1,000 contaminated sites across the state, roughly half of them in disadvantaged communities impacted by environmental problems. One in three Californians is estimated to live within a mile of a current or past toxic cleanup. Dry cleaners like Welch’s are especially problematic due to their prodigious use of toxic chlorinated solvents that have an outsized impact on soil and groundwater. According to the DTSC, there are 7,200 former or current dry cleaning shops in the state that may need to be evaluated for potential contamination.

The governor’s original budget proposed some $300 million for brownfield remediations targeting the most environmentally burdened neighborhoods in California, as a way to clear more land for affordable housing. In his May revised budget, Newsom added an extra $200 million to the program, buoyed by the support of multiple senior EPA and DTSC officials who  touted the residual opportunities for future development.

Environmental groups and community advocates have voiced fears that the DTSC often leaves dangerous wastes in place capped with concrete or soils, and that it has repeatedly botched toxic remediations.

In a series of public listening sessions, Grant Cope, deputy director of the DTSC’s Site Mitigation and Restoration Program, said the funds would pave the way for “good, safe, affordable housing.” At a senate budget subcommittee hearing toward the end of April, Jared Blumenfeld, California secretary for Environmental Protection, intimated that the sites could be used for new schools in L.A. County.

But environmental groups and community advocates up and down the state voiced fears that the department often leaves dangerous wastes in place capped with concrete or soils, and that it has repeatedly botched toxic remediations. These incidents underscore their argument that DTSC couldn’t be trusted to oversee the cleanup at sites destined to house the state’s most vulnerable. In a letter to legislators, key environmental groups like Earthjustice and California Safe Schools said they were “horrified” by the governor’s proposal.

Lawmakers in Sacramento are currently thrashing out policy specifics for the half-billion-dollar pot of money as they seek to attach it to another legislative vehicle. The main sticking point appears to be this: Once these sites have been cleaned, how will they be used? According to multiple sources, revised trailer bill language now makes no mention of housing as an end use, but it doesn’t specifically preclude it, either.

Some, like Lane, argue that state-mandated housing goals, which require cities, towns and counties to meet the housing needs of all residents regardless of income, will make brownfield cleanups a necessity in certain land-starved municipalities. “There’s no way we’re going to be able to meet the housing needs in particular if we don’t address how to clean up these sites and get them ready for residential development,” he says.

Nevertheless, critics of the proposal are much more circumspect and see different uses for such a vast slice of money from the general fund. According to Ingrid Brostrom, assistant director of the Center on Race, Poverty & the Environment, the workforce development program woven into Newsom’s original brownfields proposal should be an expanded part of the whole package. “Let’s have a conversation about a California remediation workforce writ large,” she says. Michael Henry Hayden, who lives across from the planned development, says he is concerned that further tests at the site might reveal problems that threaten the health of the community in an area already suffering “some of the highest pollution burdens in Los Angeles, and some of the lowest incomes.”

Newsom had tied the $500 million to enactment of a broader set of DTSC reforms designed to improve the troubled agency’s overall transparency and performance. Indeed, a recent Capital & Main investigation into hazardous waste facilities in L.A. County found that the DTSC still makes some of the same regulatory blunders that allowed the notorious Exide disaster to get so bad. The budget’s reform package included a raft of changes to the state’s hazardous waste programs, fee restructuring and implementation of a DTSC oversight board. The latter proposal has been floating around Sacramento for a few years, buoyed by community grassroots support. Like the brownfields proposal, however, the vast majority of the DTSC reforms were left on the cutting room floor when the latest state budget was finalized.

Nevertheless, any state-funded program for brownfield cleanups still appears to be contingent upon sweeping DTSC reform. “We are not going to give them this money until we see some real changes,” insists Southeast Los Angeles Assemblymember Cristina Garcia.

At the same time, lawmakers are painfully aware of how prior efforts to overhaul the DTSC have slid off the rails. From 2015 through 2017, an independent panel conducted an extensive review of the agency and uncovered major problems. Lawmakers last year introduced a bill geared around many of that panel’s recommendations. The bill passed, but Newsom vetoed it. A comparable piece of legislation was subsequently introduced toward the end of last year that still appears to have political legs.

While observers of the DTSC watch developments at the state capital closely, those living around the Avenue 34 Project await the next round of test results, wondering about possible impacts on the community from the pollution. In a letter to the DTSC dated May 26, L.A. City councilmember Gil Cedillo wrote that if “any soil [were to] be found contaminated and unsatisfactory to DTSC requirements,” he would ask that additional tests be conducted in the surrounding areas as well.

DTSC spokesperson Russ Edmondson didn’t respond directly to criticisms of the agency’s handling of the project, but wrote in an email response to other questions that “We look forward to continuing to work with all parties as we review data and make a determination on next steps.”

Nevertheless, Michael Henry Hayden, who lives opposite the planned redevelopment, says that he questions any plan to funnel such a large chunk of taxpayer money toward the agency to clean up polluted sites in vulnerable communities. “I don’t necessarily trust that the DTSC will do a good or honest job of it,” he says.