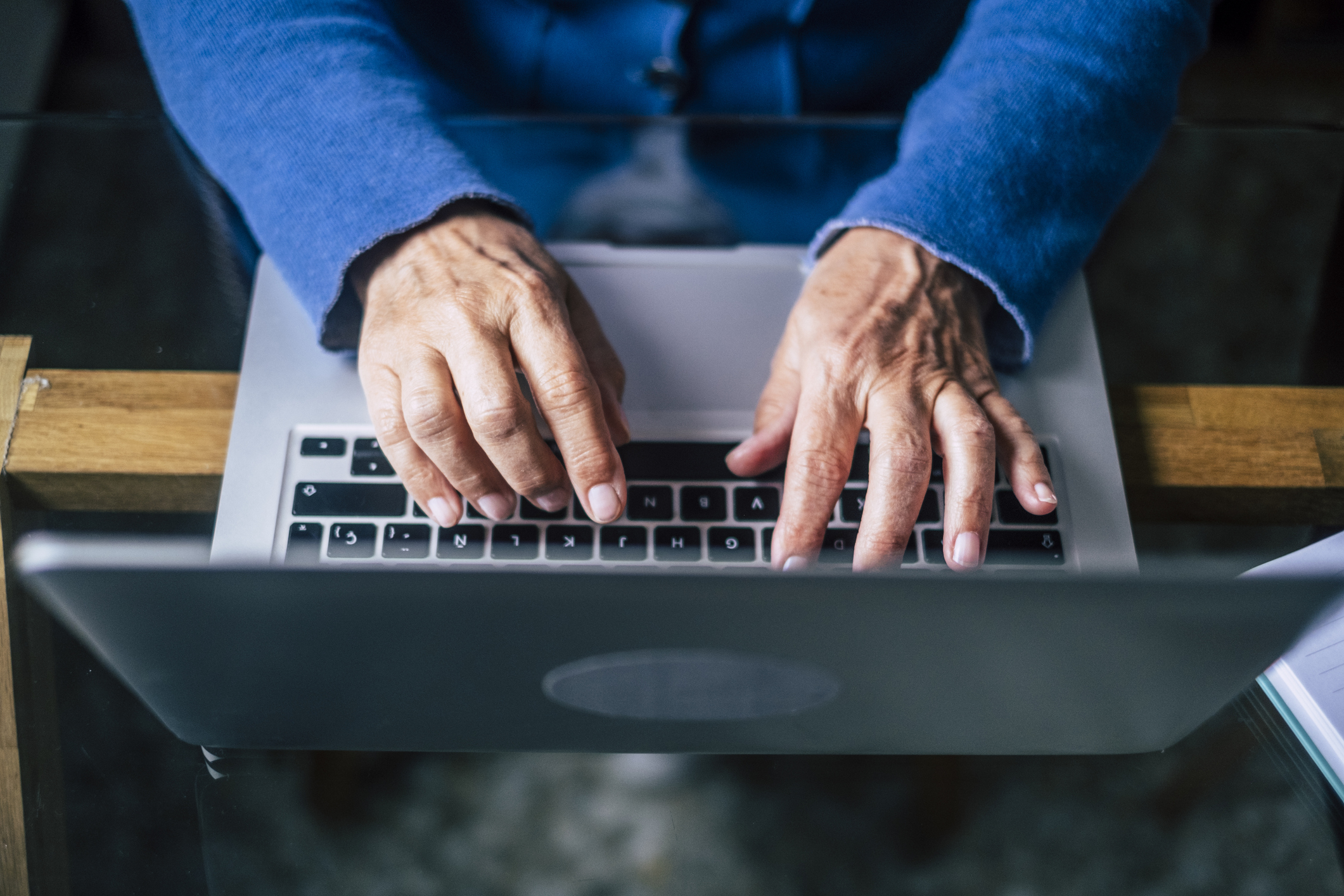 While recovering from back surgery in 2020, Palo Alto resident Elizabeth Adler needed numerous doctor visits to monitor her progress and her medications. But because of pandemic restrictions, her doctor at Sutter Health switched to video visits only, and Elizabeth didn’t know how to use an iPad, let alone log onto the provider’s portal and access video. Fortunately, Elizabeth, 65, has a husband, who’s also a senior but highly proficient with computers, to serve as her tech support in setting up telehealth appointments.

Richard Adler began introducing seniors to technology 30 years ago, and he was instrumental in launching a company that became SeniorNet. He said that there are many people like his wife who found themselves adrift, and possibly in some danger, during COVID because they lacked essential computer skills.

“For 28 of the past 30 years, the idea of helping older adults get online was always in the category of a nice thing to do — to get granny online so she could see pictures of her grandkids,” Adler said. “But with COVID, suddenly, instead of being a nice to do thing, [getting online] became an urgent thing. COVID shined a very bright spotlight on the idea of a digital divide.”

Not every senior has a spouse who’s a tech expert. And not every senior who experienced COVID stay-at-home orders faced a potential health crisis due to their lack of computer skills. Some simply found themselves inconvenienced and isolated during COVID, lacking the ability, and sometimes the devices, that could connect them to the outside world.

Antonia Routt, 66, is a marathoner and a fitness instructor for other seniors. When her classes went online through WISE and Healthy Aging, a Santa Monica-based community nonprofit, Routt decided she finally had to learn computer basics, something she had put off for years.

According to Nikki Davis of the nonprofit WISE and Healthy Aging, many seniors feel shame about being left behind by the digital revolution.

“Classes were on Zoom, and it was the only way to communicate, [but] I needed someone to set it up,” she explained. “I got a tutorial and I was able to use it, but then one detail changed, I was back to square one, and I would have to make a phone call.”

This year Routt, as well as some of her fitness students, started learning computer basics through WISE and Healthy Aging, which received a grant from the California Advanced Services Fund through the California Public Utilities Commission (CPUC) to teach digital skills to low income adults aged 50 and older. WISE used the nearly $100,000 grant to develop a series of 60-90 minute classes on computer and internet basics; avoiding online scams; and using email, Zoom and Microsoft Word. There’s also an elective on how to use smartphones.

WISE’s grant required eight hours of training for 540 seniors over a two-year time period. Through mostly word-of-mouth, the classes filled up very fast, according to Nikki Davis, vice president of program administration at WISE. Davis said many seniors feel shame about being left behind by the digital revolution.

“To be the mom of a 20-year-old who grew up with this stuff, it was gratifying for me to see these folks actually taking this training and to have the instructor say, ‘No one’s an idiot in this room.’ We’ve had a generation of people who feel embarrassed that they haven’t been able to navigate it.”

While Routt and many class members at WISE would likely have survived the pandemic even without the internet, however inconvenient and lonely it may have been, other seniors have been in a more precarious situation. Fortunately, there are several organizations and funding sources to help seniors, many without kids or grandkids to guide them, learn computer skills.

In 2020, Adler helped form a coalition of volunteers representing dozens of Bay Area organizations, agencies and schools to assist seniors in navigating the web. The Santa Clara County Digital Inclusion Workgroup developed a report on the barriers seniors face in adopting new technology — right in the heart of Silicon Valley. Now the group is advising Santa Clara County on how it should distribute funds when they come. Nearly $50 million in Access to Technology Grants from the California Department of Aging has been allocated to shrink the digital divide for low income seniors, and senior support groups throughout the state are vying for some of that money.

“Everybody thinks that San Francisco is so wired, but there’s a huge urban desert where senior housing or low income housing isn’t wired for broadband.”

The San Francisco-based Community Tech Network is also applying to secure federal funding. CTN had been teaching digital literacy at senior housing developments and community centers for 14 years until pandemic-based shutdowns in March 2020 forced a pivot to an online-only model.

That still meant (masked) face-to-face visits, through a multisession Home Connect program, to help seniors and those living with disabilities gain access to computers and the internet, even more important after the pandemic began. Through Home Connect, participants get a device and training in digital literacy in their own language — Community Tech Network has trainers in six languages — and make sure they achieve digital literacy to stay safe while they stay connected, according to CTN spokesperson Lauren Cotter.

“We were asking seniors to stay home because that was the highest death rate population [from COVID],” said Cotter. Part of the difficulty with getting seniors online, she added, is the lack of broadband in many areas, which she calls “digital redlining.”

“Everybody thinks that San Francisco is so wired, but there’s a huge urban desert where senior housing or low income housing isn’t wired for broadband,” explained Cotter. “And if you’re a Hispanic or African American and come from a redlined area or didn’t have the skill sets, you were even more at risk, because you’re not keeping in touch with your doctor. You don’t know how to do telehealth. If you’re a diabetic, and you need medication, or you need your blood pressure checked, or you have other issues, I mean, what do you do?”

Many seniors live alone — 27% of those 60 and older in the U.S. — and in a time of social isolation, getting online has been important for improving mental health and reducing loneliness. According to the Centers for Disease Control and Prevention, social isolation poses “a risk that may rival those of smoking, obesity and physical inactivity.”

A 2020 study found that seniors with less than a high school degree or incomes below $25,000 were 10 times more likely than the general population to be offline.

Seniors who before the pandemic may have been content to sit on one side of the digital divide are no longer able to remain unconnected. A 2021 AARP survey found that 44% of adults over 50 saw technology as a more important way to stay in touch with family and friends than they did before COVID. But 54% of those surveyed said they were not confident about using technology. According to the survey, many older Americans, having purchased a smartphone, laptop or smart TV, found themselves faced with assorted menus, screens and options, and saying to themselves, “Now what?” More than one in three said they lacked confidence in using the devices they acquired, and some realized they needed to perform another step: Getting internet service. Eighteen percent of respondents in the AARP survey said they didn’t have any access to the internet, mostly because it was too expensive.

Older Americans, especially poorer older Americans, are the least digitally connected group. A 2021 survey of Californians found that 23% aged 65 and older lacked broadband, compared to 10% of Californians ages 50 to 64 and less than 5% of adults 18 to 49. Lack of broadband access is a serious barrier not only for seniors living on fixed incomes but for many lower income Americans. Research commissioned in 2020 by the Humana Foundation showed that nearly 22 million U.S. seniors had no broadband access at home, and that even the most well-meaning efforts to target seniors provided a “hodgepodge of offerings, with large sections of the country served by no significant low-cost offerings or age-friendly initiatives.”

This digital divide is more than an ongoing inconvenience for some seniors. For many, lack of internet access and literacy can have life-or-death consequences. The Humana study estimated that among senior Americans who died of COVID, approximately 40% “likely lacked the technology resources for communication, social support, health information and financial management that were essential for so many others during this terrible time.” The report concluded that seniors with less than a high school degree or incomes below $25,000 are 10 times more likely than the general population to be offline. Black and Latino seniors, the report showed, are also more likely not to have internet access.

The CPUC grants, allocated to dozens of senior centers throughout the state, don’t address home broadband. However, there are local initiatives taking up the issue, such as one in Los Angeles County exploring ways of connecting its poorest residents, many of whom remain offline due to the cost of broadband services.

Antonia Routt says she’s more comfortable with emails, Google searches and Zoom today, but she’ll still hire someone to develop her website. She adds that the greatest benefit of computer classes at WISE, where she also teaches fitness, is that they enabled her to get rid of her long-term resistance to tech.

“The class is like going from horse and buggy to a car,” Routt said. “There is a wall between you and the world if you don’t use a computer.”