One hundred twenty truck drivers who haul freight to and from the twin ports of Los Angeles and Long Beach went on an Unfair Labor Practice strike Monday against the three companies they work for. The work stoppage, which has no announced end date, was called to protest alleged retaliation by Green Fleet Systems, Total Transportation Services Inc. and Pacific 9 Transportation, as well as the drivers’ long hours and low wages. Perhaps more important, the strikers are motivated by their determination to end the companies’ practice of classifying drivers as “independent contractors” – a status that allows the firms to treat their workers as second-class citizens and to avoid contributing payroll taxes to the state and federal governments. 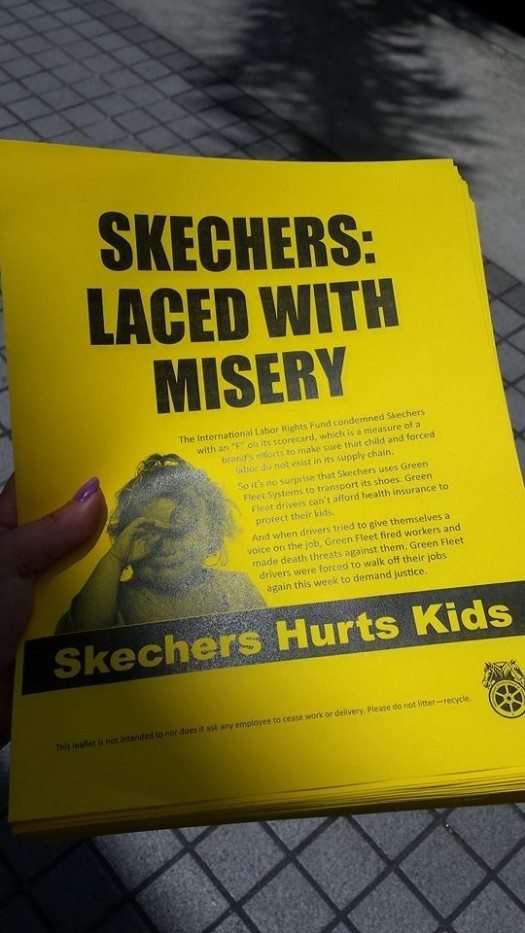 The last 24 hours have seen the strike spread into different theaters, as drivers began leafleting the Manhattan Beach flagship store of Skechers. Although the footwear giant claims it takes the high road when it comes to its employees’ working conditions, the facts show otherwise. As Capital & Main publisher Danny Feingold writes, “Skechers is turning a blind eye to the behavior of Green Fleet Systems, Skechers’ primary port trucking contractor, which hauls thousands of pairs of shoes every day from the Port of L.A. to the footwear giant’s California distribution center.”

Earlier today, port drivers and their supporters attended a meeting of the Los Angeles Harbor Commission. Speakers who testified to their working conditions included Alex Paz (below, center) who, referring to Los Angeles Mayor Eric Garcetti, said, “It’s time for Mayor Garcetti to step up and help us out.” The picket lines are holding strong, with the drivers showing every intention of staying out until their claims of wage theft and workplace retaliation are heard and addressed. As one driver told the harbor commissioners: “We have been on strike for four days and we will be here for a year if that’s what it takes!” Skechers’ Labor Troubles: A Nike for the 21st Century