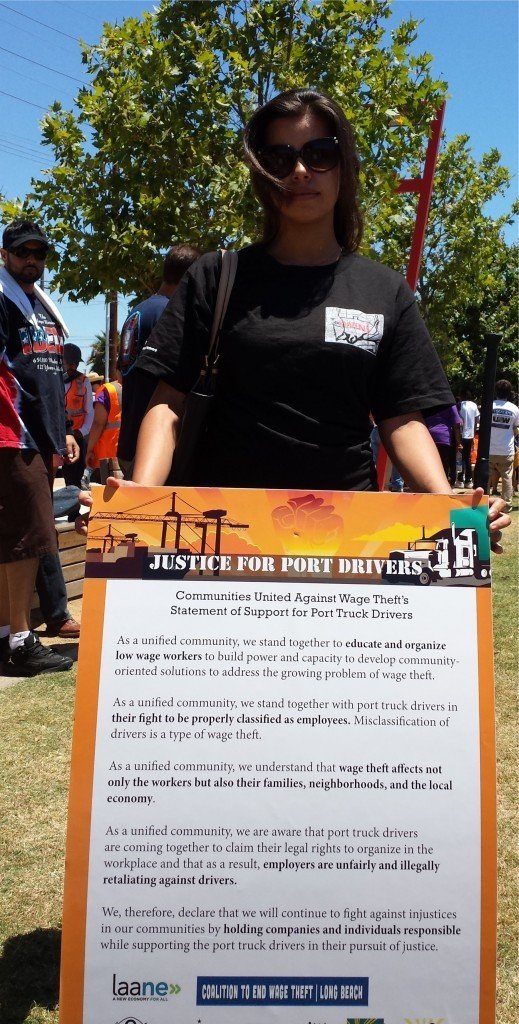 Friday ended an historic chapter in the life of the Los Angeles-Long Beach waterfront as 120 truck drivers toughed out a weeklong Unfair Labor Practice strike. The work stoppage was aimed at three companies (Green Fleet Systems, Total Transportation Services Inc. and Pacific 9 Transportation) that port haulers allege commit wage theft, engage in workplace retaliation for union organizing and misclassify their drivers as “independent contractors” rather than company employees. Such a distinction allows the firms to treat their workers as second-class citizens and to avoid contributing payroll taxes to the state and federal governments.

With no end of the strike in sight, the week nevertheless drew to a close on a celebratory note, as seen in these photographs. A rally attended by the drivers and their supporters was held outside the Terminal Island facility of Yusen Terminals, where a cumbia band, Los Jornaleros del Norte, underscored the crowd’s high spirits. Speakers included Maria Elena Durazo, the Executive Secretary-Treasurer of the Los Angeles County Federation of Labor, and Randy Cammack, International Vice President-West, International Brotherhood of Teamsters.

(Unless noted otherwise, all photographs are by Slobodan Dimitrov.)

Throughout the course of the L.A./Long Beach port driver strike, Capital & Main will continue to run photos from the marine terminals and truck yards where drivers and their supporters have gathered.