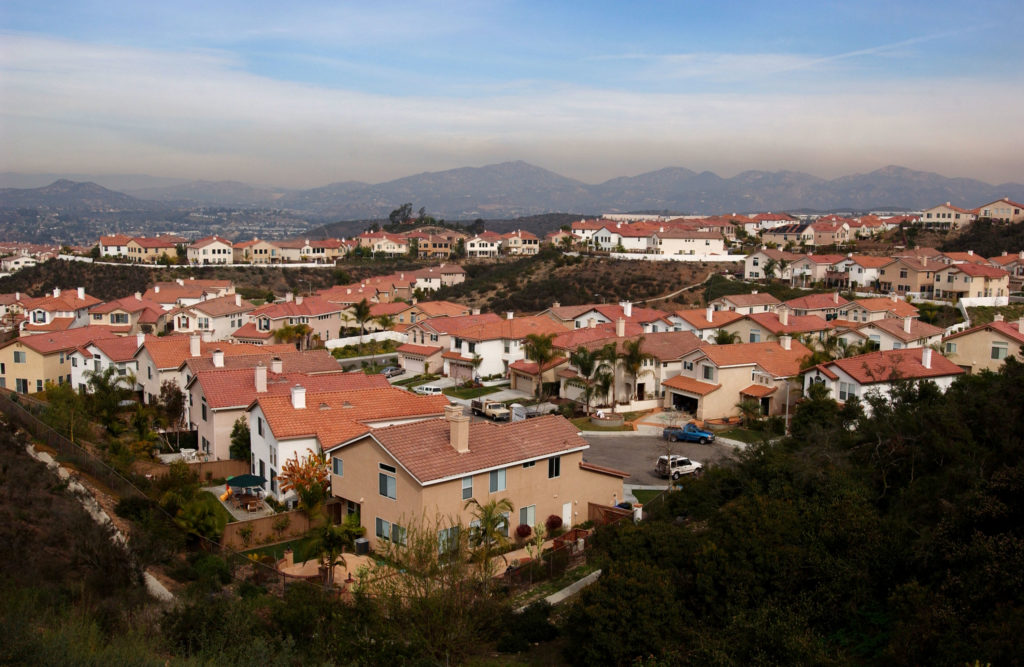 Measure A, a primary election ballot initiative, calls for any housing development-related amendments to the county General Plan that involve land designated as rural or semi-rural to come before voters as a referendum. Those pushing it say that the Republican-dominated County Board of Supervisors has failed to act on climate change by continuing to locate housing in the fire-prone backcountry.

San Diego County is California’s second-most populous county and the fifth-most in the country. According to the California Air Resources Board (CARB), California vehicles are the state’s top emitting source, accounting for 41 percent of all emissions.

Yet on December 17 the San Diego Democratic Party Central Committee officially endorsed against Measure A during a contentious meeting. The party joined the No on Measure A endorsement already made by county Republicans, a fact opponents of the measure now point out prominently in their campaign messaging to exhibit bipartisan support.

Measure A’s proponents say that money has helped purchase a potent—and, they argue, misleading—message about the proposal. Namely, that the measure represents a new form of “redlining,” harking back to the old practice of racial housing discrimination and segregation.

That message saturated the discussion held before the Central Committee vote — and had first appeared in a November 2018 research paper written by Parisa Ijadi-Maghsoodi, a local attorney and Central Committee member who focuses on poverty law, and who also spoke at its December meeting. Ijadi-Maghsoodi wrote the paper at the same time that anti-sprawl advocates were collecting signatures to put what would become Measure A on the ballot. In it, she argued that “localities have long understood the need to hide any discriminatory intent” for zoning laws like Measure A “through the use of laudable (and legal) justifications including protecting the environment, reducing traffic congestion, and achieving fiscal stability.”

She cited a 2017 academic paper titled “The Experience of Racial and Ethnic Minorities with Zoning in the United States,” which possessed a similar passage. But that paper also has a section on the alternative scenario of “Zoning as a Tool of Minority Integration and Protection.”

And in that section of the paper, author Andrew H. Whittemore pointed to a Brookings Institution report identifying San Diego County as being among the metropolitan areas with the least exclusionary zoning policies in the United States. The Brookings report also argues, in reference to growth-management strategies, “Evidence suggests that metropolitan areas with urban containment programs experienced more rapid declines in black-white segregation than those without containment.”

In another amicus brief for the Court of Appeal case, the Center on Race, Poverty & The Environment further states that the current sprawl paradigm “disproportionately disadvantages vulnerable communities” that often include people of color who reside in closer proximity to highways.

Measure A supporters call for denser and more affordable housing located close to both urban cores and job centers—and sitting close to public transit hubs—as a way of getting climate-changing cars off the road.

However, Ijadi-Maghsoodi’s argument, which would later be repeated to the media by county party chairman Will Rodriguez-Kennedy, eventually won the day.

“Measure A is bad public policy that would prevent badly needed affordable housing from being built and contribute to racial and economic segregation,” he told the news site Voice of San Diego after the Central Committee vote.

Manolatos Nelson Murphy, a San Diego public relations firm, has bolstered this narrative. The firm has received more than $1 million for its work against Measure A from the No on Measure A campaign, as of February 26, according to disclosure forms. Its vice president for public relations, Tanya Castaneda, serves as No on Measure A spokeswoman. Her husband sits on the Democratic Party’s San Diego County Central Committee, although, according to Rodriguez-Kennedy, he did not vote on the Measure A endorsement.

Numerous other connections also exist between opposition to Measure A and the Central Committee. Tanya Castaneda isn’t the only person in this story whose intimate other sits on the Central Committee – so does Ijadi-Maghsoodi’s partner. As does the sister of a Democratic Party campaign consultant named Jesus Cardenas, whose Cardenas-affiliated groups have received $138,000 to do work opposing Measure A as of February 29, campaign finance disclosures show.

The California Association of Realtors, a financier of the effort to defeat Measure A, had previously spent $8 million opposing the 2018 rent-control initiative Proposition 10, while this year it backed state Senate Bill 50, which housing justice activists say could have led to urban gentrification and displacement.

Larry Herzog, a professor at San Diego State University and author of the 2014 book Global Suburbs: Urban Sprawl from the Rio Grande to Rio de Janeiro, said opposition to Measure A by the real estate industry comes from that industry’s thirst for cheaper land and its desire to earn a “huge profit” in the near future on homes that are likely to cost at least $600,000 a pop. The current median cost of a home in San Diego County is $585,000.

“It’s a false argument because if people of color are still overall earning less than those in the rest of the country,” said Herzog of the argument about Measure A being racist, “they’re going to have even less access to those master-planned homes that are pretty expensive, especially in California.”

In the month and a half preceding the Democratic Central Committee vote and the weeks that followed, the party received $45,000 in campaign contributions from companies and associations also funding the No on Measure A effort. Of that, $25,000 came in the aftermath of the vote.

“The party isn’t an elected official, and we don’t have a direct hand in policy. We are a group of people who are elected to shape our values and endorsements,” said Rodriguez-Kennedy in response to Capital & Main’s question about the money. “Frankly, we are a big tent party with a variety of views—conservative, liberal, moderate, etc.”

The No on Measure A efforts received a major boost when the campaign announced that County Supervisor Nathan Fletcher—currently the lone Democrat on the five-member Board of Supervisors—had come out against it just days before the Central Committee vote.

A Republican-turned-Democrat, Fletcher—husband of Assembly Appropriations Committee chairwoman Lorena Gonzalez—is one of the most powerful elected county Democrats and has received campaign contributions over the years from individuals who work for the real estate sector, including more than $43,000 for his successful supervisorial run in 2018. He also is an appointed member of CARB, the state’s lead climate-change regulatory agency.

“While Supervisor Fletcher opposed sprawl development and has consistently voted against General Plan Amendments, he does not believe these types of issues should be put to a vote of the public,” the supervisor’s spokesman, James Canning, wrote in reply to questions for this story. “He believes these decisions are why you elect County Supervisors and if the decisions they make are bad, then voters have the opportunity to elect better representatives.”

Fletcher also recently told the San Diego Union-Tribune that he did not see any potential racist repercussions if Measure A becomes law.

Lori Saldaña, a former Democratic member of the California Assembly, said she now sees the fight over the ballot measure reflecting a new political landscape, with San Diego County morphing from a politically “red” to “blue” stronghold. Though the board is currently led by a 4-1 Republican majority, many believe it could turn blue in 2020 for the first time in a generation.

“When one party becomes ascendant and achieves a supermajority status, as Democrats have done throughout many counties in California, the battles are no longer Democrats versus Republicans,” said Saldaña, the former chairwoman of the Assembly Housing & Community Development Committee. “It becomes battles between moderate Democrats—who are willing to accept large contributions from monolithic corporate interests—against grassroots, progressive Democrats, who struggle to collect contributions from a broader coalition of diverse interests.”

Related Topics:Climate ChangeFeatured
Up Next

Study: Despite Gains, California Is Lagging on Climate Goals