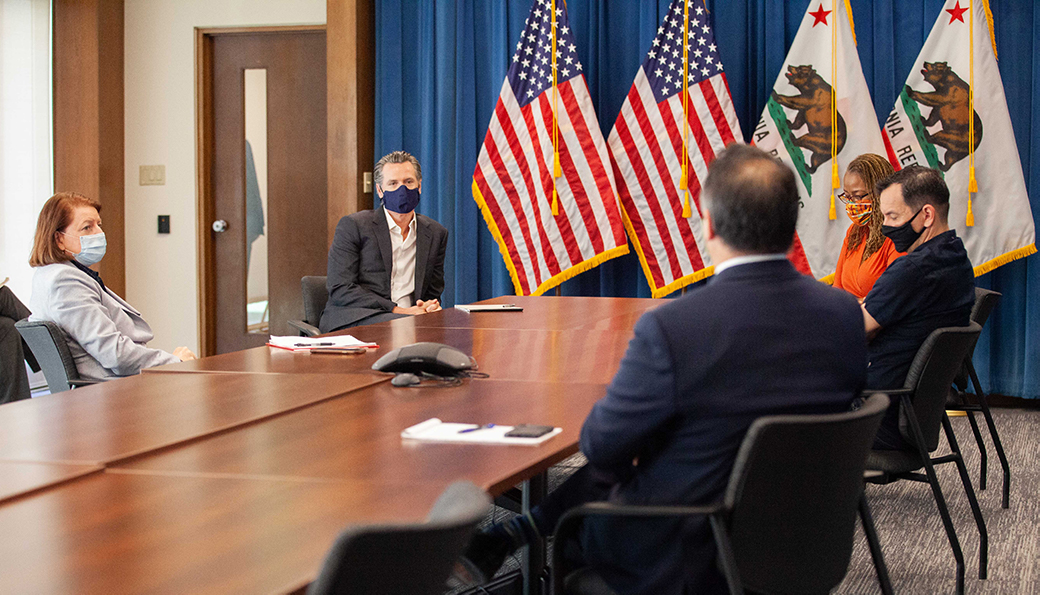 Gov. Gavin Newsom meets with legislative leaders on May 15, 2020, to discuss efforts to enact a balanced budget. Photo: Clarissa Resultan, California Department of Corrections and Rehabilitation.

California policymakers are considering cuts, and holding back on additions, to the state budget to offset mounting costs and falling revenues brought on by the COVID-19 pandemic and ensuing economic downturn. But the omission of key safety net supports in Gov. Gavin Newsom’s newest proposal, released last week, could deepen the double-edged crisis, say policy experts and advocates representing low-income Californians.

Newsom’s revised budget puts programs aimed at addressing disparities in access to vital services on the chopping block if the state doesn’t receive federal aid, including funding for low-income seniors and people with disabilities who receive in-home care. Other cuts include a freeze on a health care expansion for undocumented seniors and tax benefits for immigrant families.

These exclusions may save the state some money in the short term (a Medi-Cal expansion freeze alone is estimated to save nearly $113 million), but the costs will be much steeper down the line, said Sarah Dar, the director of health and public benefits policy for the California Immigrant Policy Center, a statewide advocacy organization.

“No one is under the impression that there is going to be a perfect response or even a good response,” said Dar. “But as we are making difficult decisions, we don’t actually have to compromise equity.”

With COVID-19 hitting elder care facilities hard, advocates warn against cuts to programs that help seniors remain in their homes.

One agency targeted for cuts is In-Home Supportive Services, which helps low-income aged, blind and disabled Californians. A potential $299 million for the program is on the chopping block unless federal aid prevents some reductions.

“These cuts will have catastrophic consequences across the state,” Doug Moore, the executive director of United Domestic Workers of America (UDW/AFSCME 3930), a union representing more than 118,000 in-home caregivers in California, said in a statement. (Disclosure: The union is a financial supporter of this website.)

With half of California’s COVID-related deaths occurring in elder care facilities, “Now is not the time to cut IHSS, which allows low-income seniors and people with disabilities to receive care safely at home,” Moore said.

And while the governor’s current budget plan maintains most funding for Medi-Cal, the state’s Medicaid program, expansions and rate increases proposed earlier this year are being put on hold, despite an expected increase in need because of the health and economic crises.

“It’s going to compromise our ability to stop the virus from spreading if some people don’t have health care and feel hesitant to go see a doctor.”

Dar said it would be shortsighted for state officials to miss the opportunity to extend Medi-Cal’s no- or low-cost health care services to all low-income seniors regardless of immigration status. Older adults are at higher risk of developing serious complications from COVID-19, and gaps in coverage could prevent them from seeking care.

“It’s going to compromise our ability to stop the virus from spreading if some people don’t have health care and feel hesitant to go in to see a doctor,” Dar said.

And the financial burden of medical costs would fall on families already feeling the brunt of the crisis, Dar said.

More than 4.5 million Californians have applied for unemployment since the start of the pandemic. Nearly one in four noncitizen immigrants, or an estimated 688,000 workers, have lost their jobs during the crisis, according to a study by the University of California, Merced. About half of these out-of-work immigrants are undocumented.

Undocumented Californians contribute about $3 billion in state and local taxes each year, and billions more in federal taxes. But these immigrant taxpayers are not currently eligible for any federal stimulus payments or state unemployment benefits.

Newsom also leaves undocumented immigrants out of anti-poverty tax credit programs, despite calls from California mayors, legislators and advocates to expand the California Earned Income Tax Credit and the Young Child Tax Credit to all low-income tax filers regardless of immigration status, and to make it retroactive for 2019.

According to Anna Hasselblad, public policy director for United Ways of California, the need for the tax credits is substantial, the state’s upfront cost isn’t that great, and the long-term impacts on the economy would be positive. (United Ways provides services to low-income families across the state through its 30 local chapters.)

“That money isn’t going to be socked away, it is going to go right back into restarting the economic engine of California for those who have the greatest need,” said Hasselblad.

There’s still a chance that the State Assembly and the Senate could restore some of these provisions into the budget during negotiations in the coming weeks. After the budget is passed by June 15, legislators will also have opportunities later in the year for revisions, including following the July 15 tax deadline when the pandemic’s effects on revenues will be clearer.

Under the proposed budget, funding for many other programs that benefit low-income families will remain steady.

“The governor has found a way to put together a budget in very difficult fiscal times that sustained some critical programs,” said Scott Graves, the research director for the California Budget & Policy Center think tank.

CalWORKs and the State Supplementary Payment, which provide cash assistance to meet basic needs, remain intact. The California Earned Income Tax Credit, which was expanded last year and now benefits about 3 million low-income working families, will also keep its funding, according to the governor’s proposal.

Despite increased public need, California policymakers are legally required to balance this year’s budget, despite a projected $54 billion deficit — higher than during the Great Recession. States, unlike the federal government, can’t print money. They are constrained, much like a household, to spend only what they bring in — and revenues are collapsing.

California is projected to lose $63 billion this year in tax breaks that mainly benefit high-income households and corporations.

“When you’re trying to address a budget shortfall, you want to make sure that you really are using every tool in the toolbox,” said Graves. The governor’s current plan does use many of them: drawing down on the state’s sizable reserves, shifting money between programs, reducing spending, borrowing from special funds and temporarily tweaking some minor taxes on businesses.

There are also additional tools that could be considered. “There is precedent for raising revenues during a recession to help to reduce the need to make really draconian cuts,” said Graves. California is projected to lose $63 billion in state revenues this year in tax breaks — including credits, reductions and deferrals, particularly for homeowners — that mainly benefit high-income households and corporations, according to a Budget Center report from earlier this year. Collecting those taxes could help fill in the budget gap.

Ultimately, though, federal assistance is the only way to “prevent really devastating budget cuts from going into effect,” Graves said. “The worst thing you can do in a recession is to have states and local governments across the country pulling back on spending… That is actually going to prolong and deepen the recession.”

Gov. Newsom wrote in his proposed budget that without help from Washington, D.C., “deep cuts to core services like schools, universities, and safety net programs will be unavoidable—both in California and across the country.”