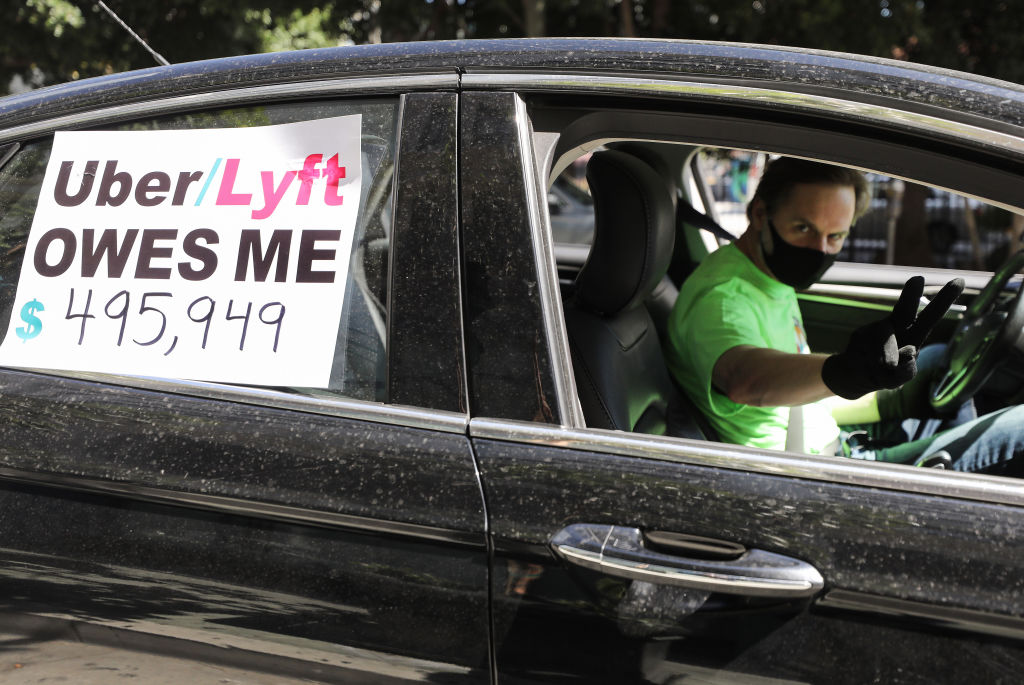 In mid-March, with the economy largely shuttered by shelter-in-place orders, gig drivers saw much of their work evaporate. Some struggled on; many others decided to wait out the pandemic.

Fifty-year-old Alameda-based rideshare driver Edan Alva got sick in the early days of the outbreak, but never got tested for COVID-19 and so doesn’t know if he now has antibodies. Scared that he might still be susceptible to the disease, he decided to quit temporarily. “I stopped driving April 7th,” he recalls. “Work was so slow I was down to five dollars an hour. I didn’t see the point of exposing myself to risk. Even in the early days, we were the most likely to encounter it. We pick people up from airports. We carry passengers at very close proximity to ourselves. Multiple people every day. Hundreds a month.”

Lyft Edan Alva driver says he will sit out the early stages of the state’s reopening: “I’ll start working when I feel safe.”

Now, as California’s economy gradually reopens, he’s decided to sit out the early stages of the reopening. “I’ll start working when I feel safe,” he explains. “I’m pretty far from it at the moment. I have a family, people I’m in touch with, and I don’t want to put anyone else at risk.”

The California Labor Federation estimates that as many as nine out of every 10 gig drivers – hundreds of thousands of drivers in the state – have lost their income streams over the past three months. Many, like Alva, are now wrestling with the question of how and when to return to work. Their experiences during the early days of the pandemic have soured them on Lyft’s and Uber’s ability, or willingness, to provide their workers with what they need to stay safe. And that, as companies develop models for how to operate during the pandemic, is what has so many drivers worried about what work in the coming months will entail. Alva, who has worked as a driver for over five years, explains how the companies — even after the passage of California’s Assembly Bill 5 — refuse to consider drivers as employees. Organizers claim, citing UC Berkeley Labor Center findings, that the companies don’t pay their full share into the unemployment insurance fund, and don’t provide the state with earnings data from their drivers. When asked for comment, Lyft’s communications team replied that “the study’s author’s claim that Lyft does not provide states wage data in order to help process drivers through the UI [unemployment insurance] system is flatly false. We have been working with states across the country, including in California during this pandemic, to provide them the data they need for UI verification.”

Read Other Stories From This Series

What no one disputes, however, is that the companies don’t provide health insurance to their drivers. As a result, Alva says, he has had to pay for his own health insurance, which comes with high deductibles and thus makes it hard for him to access affordable treatment; and, since he is considered a contractor, he is entirely responsible for all of the costs of keeping his car in good condition. The gig driver model, he has concluded, “pushes the expenses and the risks onto the driver,” providing an unpalatable choice: either stop working entirely, or accept the risk and don’t turn down any rides, even if it puts them in harm’s way.

When the COVID-19 crisis hit, the rideshare driver model became even riskier. Alva says that he twice approached Lyft requesting that it provide disinfectant for his car and PPE for him to wear. Both times, he recalls, despite the fact that both Lyft and Uber have publicly committed to spending millions of dollars on PPE for their drivers, he was rebuffed.

And so, he says, “I ran from store to store in the Bay Area trying to find masks and disinfectant.” Other drivers report similar stories, as well as being unable to access financial relief as the pandemic took hold.

While passengers are supposed to mask up before getting in a Lyft or Uber car, the enforcement mechanisms for them aren’t as stringent as they are for drivers.

In an emailed response, Lyft’s communications team claimed: “We are dedicating nearly $2.5 million to cleaning supplies and protective equipment, and have already given out nearly 120,000 sanitizing products and face masks in more than 40 markets across North America.” Lyft did not, in its reply, deny that drivers were also buying their own masks.

Groups such as Gig Workers Rising, which have been organizing drivers, grew so dissatisfied with Lyft’s and Uber’s sluggish response that they turned to their own purchasing arrangements for masks. In California, unemployed immigrant garment workers in Southern California, coordinated by the Los Angeles-based Garment Worker Center, ended up being paid by Gig Workers Rising to pick up the slack, and to sew thousands of masks that could be distributed to drivers.

But it wasn’t just the lack of PPE that bothered drivers. Steve Gregg, a 52-year-old Uber and Lyft worker who recently moved from Antioch to Modesto, says that because he had pre-existing medical conditions, he applied for Uber’s pandemic relief, which would have allowed him to stop driving and back-stopped him two weeks of pay.

The company, he alleges, never paid him; ultimately, he says, while he was waiting to hear back, and as his finances cratered, Uber’s guidelines changed so that the company would pay this money only to drivers who were actually diagnosed with COVID-19. Uber did not respond to requests for comment on their pandemic relief payment criteria.

“The vibe I get from other drivers is they’re really scared of corona and don’t want to die from it,” says Steve Gregg.
“I’d go back only in absolute desperation.”

Like Alva, Gregg has remained on the sidelines as the economy has sputtered back to life; many of his co-workers have similarly opted for caution. “The vibe I get from other drivers is they’re really scared of corona and don’t want to die from it,” he says. “There’s not enough safety protocols for me going back to rideshare. I’d go back only in absolute desperation.”

Those who have returned to the workplace face new realities. “They’re [Lyft and Uber] requiring drivers to have PPE right now to start working. And they’re not providing it; drivers have to provide it themselves: hand sanitizer, gloves, masks, disinfectant,” alleges Steve Smith, communication director with the California Labor Federation. Uber, he continues, is “instituting a facial recognition software, where drivers put on a mask, they photograph themselves before they start driving… The intent is, ‘no mask, no passenger.’” Uber did not respond to requests for comment on this.

And while passengers are also supposed to mask up before getting in a Lyft or Uber car, the enforcement mechanisms for them aren’t as stringent. There’s no app-based system that would forfeit a passenger’s ride fee if they attempt to enter a vehicle maskless; the company’s attitude toward riders is, essentially, to ask them to voluntarily act in good faith. Sure, in theory a driver is within their rights to refuse to drive a nonmasked passenger. In practice, however, that just means the driver loses needed income.

For those workers, such as L.A.-based Jerome Gage, aged 28, who are ramping up their workload as the economy kicks back into gear, there are a host of new concerns surrounding how to protect their health.

Gage says that he would like the companies to pay for plastic partitions to be professionally installed in their vehicles, as an extra precaution to prevent passengers from coughing and sneezing on drivers. But the companies haven’t offered to do so, and Gage, who has been working throughout the crisis, and purchasing his own sanitary supplies and PPE to supplement the limited amount provided by the company — and who now is finding that the number of ride requests he gets is picking up again — says he fears that if he tries to install such a divide himself he wouldn’t be able to do so in a safe way; that it would come loose and fall on him while he was driving.

Even though he says that the vast majority of his passengers are wearing masks, Gage remains wary. He acknowledges that he is “absolutely worried” about his health, and he wonders why Uber and Lyft haven’t done more to protect drivers. There should be, he says, a “driver safety fund,” and an expanded safety net so that drivers don’t feel compelled, amid the ongoing pandemic, to pick up the maximum number of rides that they can each day.