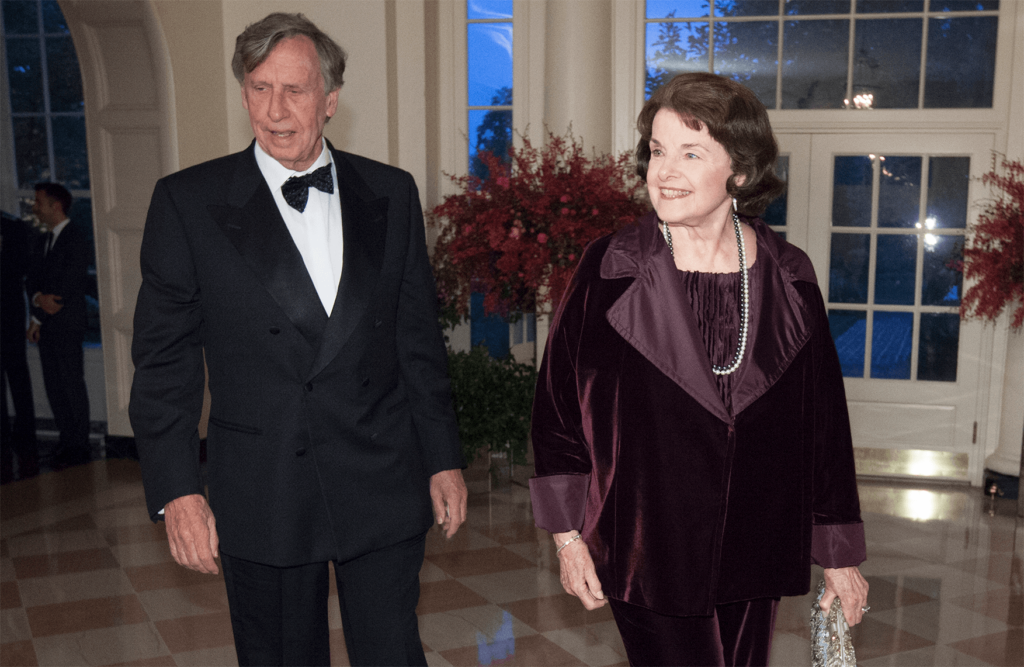 Dianne Feinstein’s husband and the UC system are no strangers to controversy surrounding their investment and business practices.

University of California regents approved a nine-figure investment in a private equity fund run by a major donor to Democratic Senator Dianne Feinstein, whose husband sits on the regents’ board. The investment was disclosed just as some of the private equity fund’s overseers and advisers were pumping thousands of dollars of donations into Feinstein’s campaign, according to documents reviewed by Capital & Main.

In the fall of 2017, UC regents decided to shift $100 million worth of university endowment and pension resources into the RISE fund, operated by TPG. That firm was founded by David Bonderman, who has forged extensive business relationships with Feinstein’s husband, regent Richard Blum. Over the past quarter-century, Blum served as a TPG executive, founded a fund overseeing TPG’s Asia business and partnered with TPG on numerous investment deals with his own investment fund, Blum Capital. The $100 million investment was UC’s first investment with TPG.

Securities laws require public officials to make investment decisions on the basis of merit, not personal relationships or political contributions.

Since 1992, Bonderman and his wife have donated more than $32,000 to Feinstein’s political campaigns. Additionally, donors associated with the RISE fund’s board and advisory panel have contributed more than $65,000 to Feinstein’s campaigns and political action committee. That includes $15,400 of donations in the three-week period surrounding the disclosure of UC’s investment in the RISE fund. Those donations came from Salesforce founder Marc Benioff and his wife, Lynne, as well as from Ariel Investments president Mellody Hobson. Marc Benioff and Hobson, who is married to George Lucas of Star Wars fame, sit on the RISE Fund’s Founders Board.

“The decision by the UC regents to make an investment in a fund run by a close friend and business partner of Richard Blum raises potential issues of institutional corruption.”

Blum argues that there is no conflict of interest.

“I’ve never heard of the RISE Fund,” he told Capital & Main. “We used to be partners with TPG. We’ve done investments together. But I have nothing to do with TPG or the RISE Fund… [The University of California investment office] never checks with me on anything.”

Blum conceded that, in addition to his business and personal relationships with Bonderman and TPG, he also knows another top TPG and RISE Fund executive, Jim Coulter, and added, “I occasionally get together with [UC Chief Investment Officer] Jagdeep [Singh Bachher] and we talk about philosophy.”

Singh Bachher is in charge of oversight and management of UC’s investment in the RISE Fund.

Capital & Main asked TPG if it had disclosed its executives’ relationships with Blum and donations to Feinstein. In a statement, TPG said that it “adheres to the strongest compliance standards and all political donations are subjected to compliance review and clearance, and in the case of federal officials are publicly disclosed through the Federal Election Commission. TPG responded in the ordinary course to due diligence questions posed by UC in connection with its investment.”

The University of California forwarded the regents’ conflict of interest policy and made no other comment. Senator Feinstein did not respond to a request for comment by press time.

“The decision by the UC regents to make an investment in a fund run by a close friend and business partner of Richard Blum raises potential issues of institutional corruption,” said Jay Youngdahl, an attorney and pension expert. “When money saved for workers’ retirement is placed into high-fee investments that benefit those close to politicians, questions need to be asked and answered. Investment funds in several states have suffered problems with similar practices.”

Blum, Bonderman and the UC system are no strangers to controversy surrounding their investment and business practices.

Blum in recent years has faced questions about his overlapping business and political interests. In 2013, he was lambasted by investigative journalist Peter Byrne when Blum’s real estate firm, CBRE, got a $118-plus million contract to sell and lease U.S. Postal Service property. In 2015, the Postal Service’s inspector general recommended that the contract be terminated. Blum was also criticized by Michael Hiltzik of the Los Angeles Times for his role in using CalPERS, the state employees’ retirement fund, to purchase the for-profit higher education firm ITT. At the same time he was investing in ITT, which has now been shut down (at a significant loss to CalPERS), Blum was voting to increase UC tuition by 32 percent.

More recently, Blum Capital was blamed by Payless ShoeSource’s creditors for bankrupting the chain to provide $350 million in dividends to Blum Capital and its business partner on the deal, Golden Gate Capital. In the Blum and Golden Gate-initiated bankruptcy, Payless closed 700 stores, laid off hundreds and sued former employees to repay for small signing and relocation bonuses the company had given out.

Similarly, the SEC fined TPG $13 million for misleading investors in December 2017. In June 2017, Bonderman resigned from Uber’s board after making a comment widely seen as offensive to women. And in 2015, TPG was sued by its former communications director, Adam Levine, who had also worked as deputy press secretary for George W. Bush. Levine claimed in legal filings that the firm “miss-billed [sic] expenses, flouted compliance rules, and gave inaccurate information about its investment team,” according to Reuters. The lawsuit was dropped later in the year, according to the firm.

Meanwhile, the UC Retirement Plan has lately been engulfed in scandal over pay-to-play allegations.

In early September, the pension trade publication Institutional Investor published a report showing that the retirement system’s chief investment officer faced “serious charges of mismanagement.” The report also highlighted allegations from an anonymous tipster with inside information that Bachher had placed $250 million in a fund run by a former UC regent, Paul Wachter, who had participated in Bachher’s hiring. The investment was opposed by other top investment staff at UC, the article said.