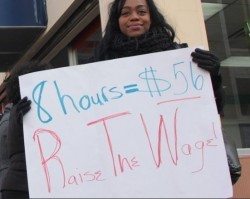 Focusing on Medicaid, food stamps, the Earned Income Tax Credit and Temporary Assistance for Needy Families, researchers estimated the total cost of those programs for all working families during its study period at $243 billion. The study notes, however, that the fast-food industry stands out for its low wages and lack of full time work hours. The report pegged the median hourly wage for employees working at least 27 weeks a year and 10 hours a week at $8.77 an hour.At a median of 30 hours per week, that puts a full time employee with a family of two at well below basic subsistence.

The study comes out at a time when such industry leaders as McDonald’s, Burger King Corp., Wendy’s and KFC Corp. have come under increasing fire by labor groups protesting what they call the corporations’ “starvation wages”; unions have also been seeking to organize the country’s estimated 4.1 million fast-food workers.

The researchers’ hard data promise to add ammunition to those efforts.

In addition to its implication that public poverty programs amount to a government subsidy for some of the nation’s wealthiest and largest employers, the study also overturns some popular misconceptions about who exactly is flipping our burgers, frying our chicken and serving our lattes.

The impression of the fast-food worker as a teenager living at home with his or her parents, for example, turns out to have little basis in fact. Rather, the study shows that workers under the age of 19 and living with a parent comprise a mere 18 percent of this workforce, a far smaller share than the 26 percent with children of their own or the 68 percent that are not in school and are single or married adults with or without children.

Of the $7 billion in public aid spent annually on fast-food workers, $3.9 billion goes to Medicaid and the State Children’s Health Insurance Program (CHIP), while food stamp benefits account for $1.04 billion, and Earned Income Tax Credit payments make up another $1.95 billion.

Fast Food, Poverty Wages joins a series of studies in recent years that have been have been examining and upending long-held assumptions about the true economic costs and social effects of low wages, while creating political momentum for living and minimum wage laws, and benefits capable of raising the service industry workforce out of poverty. A companion report, Going Nowhere Fast, was also released today by the National Employment Law Project and details the findings of the Berkeley report on a company-by-company basis.