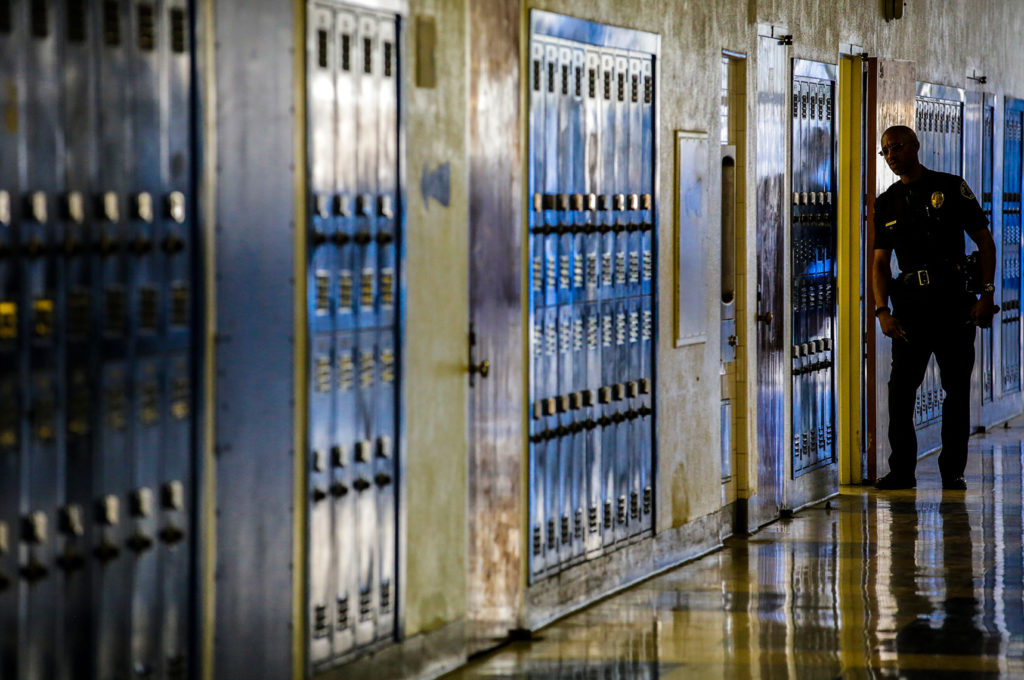 LIKE MANY SCHOOL DISTRICTS in the post-Columbine era of the late 1990s, Los Angeles’ responded to misbehavior with zero-tolerance toughness. Tens of thousands of students were suspended – with African-Americans and children with disabilities taking a disproportionate share of those punishments. In 2011 the U.S. Department of Education’s Office of Civil Rights (OCR) found that, for disciplinary and other reasons, black students had been denied equal access to education. In response, the district embarked on a campaign to slash suspensions and, five years ago, replaced harsh discipline with restorative justice policies intended to transform schools into inclusive communities where kids and adults talk out problems before they escalate into serious incidents.

Restorative justice remains a new way of thinking for the more than 60,000 teachers and administrators who staff some 1,300 schools across the sprawling district. It also represents a critical challenge — how the Los Angeles Unified School District meets it will determine how well the district addresses the needs of a changing and mostly low-income student body.

Steep drops in student suspensions have been almost matched by increases in referrals to law enforcement.

“It’s a cultural change and that doesn’t happen overnight,” said newly elected school board member Jackie Goldberg. She noted that school administrators might find themselves stuck – unable to suspend, but without a fully implemented restorative justice program that students and staff understand.

That may be why school administrators have quietly taken a decidedly non-restorative approach to keeping order: They’ve called the cops. Indeed, at some schools with formerly high suspension rates, referrals to law enforcement rose nearly in inverse proportion to the drop in suspensions between 2011-12 and 2015-16, the last year for which data is publicly available. (The OCR defines referrals to law enforcement as “an action by which a student is reported to any law enforcement agency or official” for incidents that occur at school or school-related events, regardless of whether police take official action.)

Unpublished data from the 2017-18 school year show law enforcement referrals have dropped significantly to eight referrals per 1,000 students, down from 15 per 1,000, said Dan Losen, the director of the Center for Civil Rights Remedies at UCLA’s Civil Rights Project. Despite the drop, however, LAUSD schools appear to have made more than 4,700 referrals to law enforcement, based on district enrollment figures.

An increase in police calls threatens to defeat the whole purpose of the district’s anti-suspension effort.

That’s a concern, Losen said. “The involvement of police is generally not conducive to the best interests of children…You’re criminalizing youthful misbehavior.”

The increase in police calls threatens to defeat the whole purpose of the district’s anti-suspension effort, which is to stop disproportionately punishing African-American students, to embrace troubled kids instead of pushing them away from school and to divert students from unnecessary involvement with the criminal justice system.

For instance, African-American students comprised over eight percent of the LAUSD student population, but accounted for 19.5 percent of calls to police or probation in 2015-16.

Overall, referrals to law enforcement shot up in L.A. 145 percent between 2011-12 and 2015-16, as the campaign to halt suspensions kicked into high gear, according to OCR data.

The questioning by police sends students as young as 11 or 12 the message that school officials think they’re criminals.

“Our sense is that in affluent schools, students aren’t being questioned by law enforcement,” said Ruth Cusick, senior education rights attorney with Public Counsel, a non-profit civil rights law firm. “This is happening in high-poverty schools with almost all students of color.”

Cusick argued that questioning by police sends students as young as 11 or 12 the message that school officials think they’re criminals, and places misbehaving students on the radar of on-campus law enforcement officers, putting them at risk for getting into more trouble later in their school careers.

For instance, by 2015-16 Edwin Markham Middle School, LAUSD’s third-highest suspending school in the academic year four years before, had cut its suspension rate by half, suspending nearly one in seven students — but increased its referrals to law enforcement fivefold.

Los Angeles’ school police department is the nation’s largest, and is also a political player.

African-American students made up 21 percent of Markham Middle School’s student body, but accounted for a third of the school’s law enforcement calls and 35 percent of its suspensions.

Similarly, Whitney Young Continuation High School, with the district’s highest suspension rate in 2011-12, made up for its 56 percent drop in suspensions with a nine-fold increase in calls to police. The same was true at Audubon Middle School, which cut suspensions by nearly 80 percent, but made 12 times as many calls to law enforcement that it had four years before. (Markham’s principal did not return an emailed request for comment for this story; principals at Whitney Young and Audubon also did not return phone calls.)

Capital & Main filed an April 22 public records request with the LAUSD for more recent data, which the district was required to provide to the federal government last month; we have yet to receive the information.

However, last March the district’s restorative justice unit reported that LAUSD staff continues to make frequent calls to law enforcement: District schools called police more than 3,000 times in the first half of 2018-19. Restorative justice was employed 2,713 times as a behavioral intervention.

“That is shocking data that the [LAUSD] staff should be concerned about and they don’t seem to blink an eye,” said Ruth Cusick.

But Cusick said the data suggest otherwise because the number of arrests, tickets and diversions that the department issues is tiny compared to the calls to police that the district reports. In 2015-16, for example, more than 8,400 students were referred to law enforcement, but the L.A. School Police reports making just 530 arrests and issuing 665 citations.

Cusick sits on the LAUSD’s school discipline task force, yet, she said, district officials have failed to answer her questions about how calls to law enforcement are used on campus.

District communications staff have been equally silent in response to repeated requests from Capital & Main seeking similar information. School board members, except for Goldberg, also declined to respond to requests for comment.

Deborah Brandy, the LAUSD restorative justice department director, did describe to Capital & Main the powerful effect restorative justice can have on students’ lives. She recalled how one group of boys had their wallets and watches stolen from a University High School locker room and confronted the thief, a former student, in a “harm repairing” circle. The boys learned the thief was a homeless former student who had his own belongings stolen the night before. The boys befriended the former student who returned their items. They helped him get back into school and counseling. Later, they made a presentation to the school board.

“The boys talked about how restorative justice helped them grow up and taught them to grow up without conflict,” Brandy said.

To implement the program, Brandy’s department trains a small group from each school in such subjects as team building, empathy and handling disruptive behavior. These small teams are expected to train others at their schools. Still, implementation has been spotty, according to some L.A. teachers and a report by Public Counsel and the parent advocacy group CADRE (Community Asset Development Re-defining Education).

One fifth grade teacher, who asked not to be named, expressed her exasperation about discipline at her Central L.A. school. “We have students cussing at us, saying racial slurs to each other. We have a lot of theft and pushing and shoving on the yard.” Punitive discipline is banned at the school, the teacher said, but effective positive alternatives like restorative justice aren’t fully in place either.

SCHOOL POLICE ARE PERMANENTLY ASSIGNED to many middle and high school campuses, and their sheer presence may partly explain the frequency of student referrals to law enforcement.

Los Angeles’ school police department is the nation’s largest, with more than 400 uniformed officers. Their numbers haven’t been reduced, despite recent pushback by students and activist groups that oppose police on campus, and which seek to eliminate daily searches of randomly selected students and their belongings (which are conducted by school officials, often with police standing by).

The police department is also a political player, with its unions endorsing school board candidates and officers, and making substantial contributions to school board races. Its 2018-19 budget was $57 million — more than four times that of the restorative justice allocation.

“I can feel their frustration,” said University of North Carolina, Chapel Hill professor Ayesha Hashim of L.A. teachers who may feel there are a lack of options for effective discipline. Hashim authored a 2018 study of LAUSD’s effort to combat school suspensions – which, she noted, “is difficult to do in a top-down manner.”

The 2017 CADRE report, which analyzed discipline data from more than 100 South L.A. schools, found that the district’s non-punitive approach to discipline, known as “school-wide positive behavior intervention and support,” of which restorative justice is a part, wasn’t adequately put into practice in the majority of South L.A. schools.

Meanwhile, activists say they will continue to campaign for a reduced police presence at L.A. schools –- especially now that they say they have the ear of Jackie Goldberg, who supports the elimination of random searches on campus.

Are ‘Opportunity Zone’ Tax Breaks Too Good to Be True?