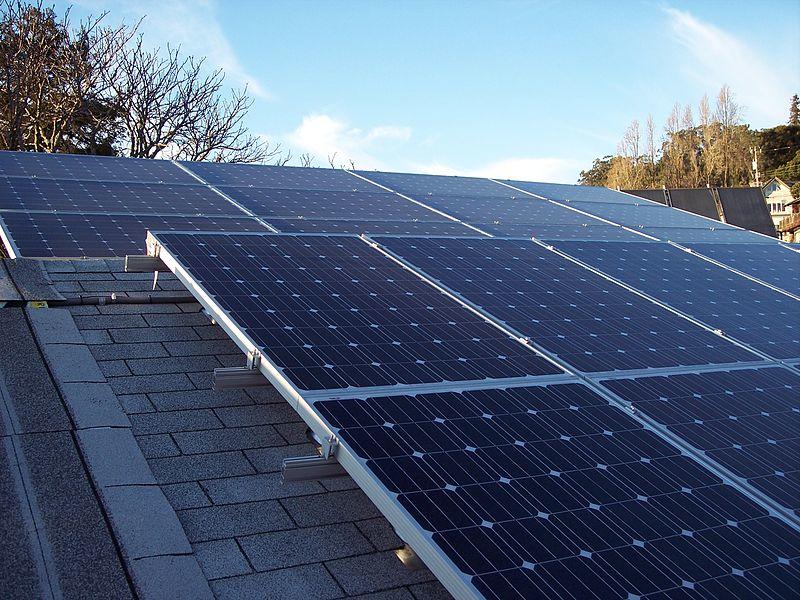 As major climate legislation that would dramatically increase our investment in renewable energy approaches the Governor’s desk, this is a critical time to be thinking about low-income communities, including South Los Angeles, for whom the benefits of renewable energy investment have been largely out of reach.

The Los Angeles Alliance for a New Economy (LAANE), in partnership with my organization, Strategic Concepts in Organizing and Policy Education (SCOPE), recently conducted an analysis of the L.A. Department of Water and Power’s most established renewable energy program, the Solar Incentives Program (SIP).  We found that this residential rooftop solar initiative has left South L.A. behind, along with Wilmington, Boyle Heights, Pacoima and other communities. 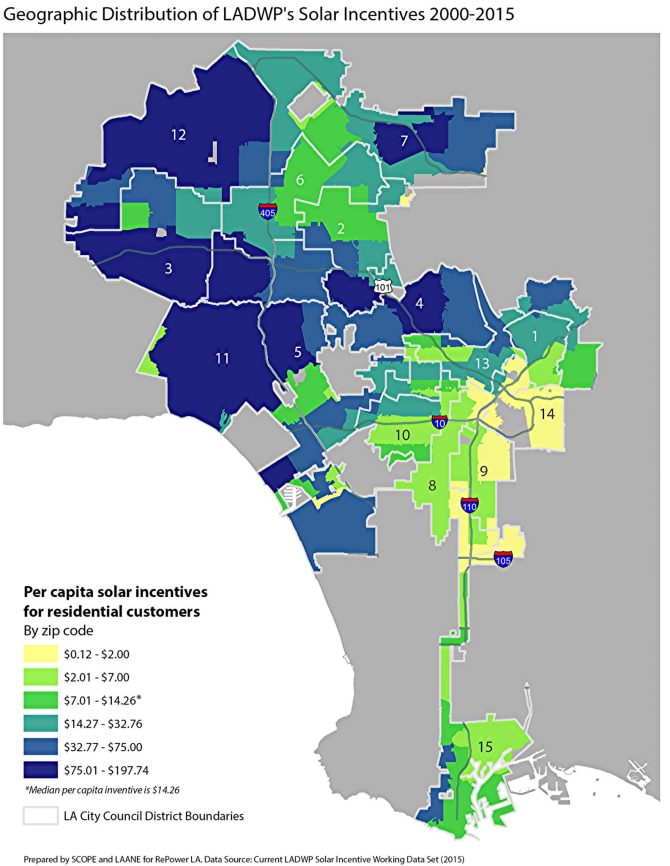 This program offers incentives for residents who buy and install their own rooftop solar energy systems from private solar companies. In the past 15 years, LADWP has invested more than $115 million of ratepayer funds to support the development of residential rooftop solar.  However, the distribution of incentives across the city is unequal. South L.A. received approximately $3 of those incentives per person, as compared to West Los Angeles, which received $53 per person. Similarly, Watts received $0.37 per person, while affluent Bel Air received nearly $200 per person in solar incentives. 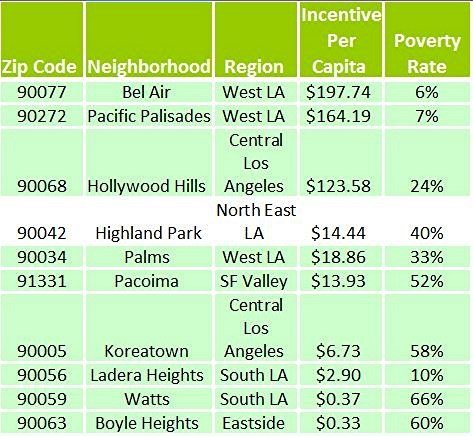 A solar energy system, once installed, can dramatically reduce the cost of electricity for homeowners.  In fact, research suggests that California families can save as much as $30,000 over 20 years.   Yet those savings are only benefiting those who can afford to make the initial investment.

What is causing this disparity?  While the price of solar has come down significantly, it still remains out of reach for many L.A. households.  The most obvious barrier is that you must own your roof to benefit from rooftop solar.  In L.A. less than half of all residents, and in historic South Central L.A., only 27 percent of residents, own their home. Even homeowners sometimes face numerous barriers:  Roofs may be in disrepair.  Families may have poor credit.  Negotiating with private solar companies for competitive rates can be intimidating.

Investing in renewable energy and expanding local solar also presents an opportunity to create entry-level jobs and training programs—an opportunity particularly needed in Los Angeles’ most disadvantaged communities.  Research from the University of Massachusetts suggests that every million dollars invested in solar initiatives leads to the creation of 9.8 years of employment.  This is a higher job creation rate than that offered by the coal (4.9 years) and natural gas (3.7 years) industries combined.

While jobs are created through local solar initiatives, research by the UC Berkeley Labor Center shows that many of those jobs do not lead to the middle class careers that our communities so desperately need. Part of this problem is the gap in training and workforce development that exists within the burgeoning rooftop solar industry.

Rooftop installer occupations currently lack “a distinct career progression,” according to the solar industry’s National Solar Jobs Census.  Wages range between $12.98 and $15.86 per hour – considerably less than their utility counterparts.

However, this doesn’t mean residents of South L.A. should turn against local solar.  Rooftop solar is a critical part of our city’s future energy mix.  We need investments that broaden residents’ access to solar, that lead to good jobs and that increase the reliability and sustainability of our power system.

That’s why SCOPE, along with other members of the RePower LA coalition, is excited about a Community Solar Program now in development at the LADWP.  The program will allow customers to benefit from solar panels installed on municipal property. By buying solar shares, subscribers to the program will be able to lock in their energy rates and protect themselves from the rising cost of energy. For example, a typical customer who pays $132 per month on her electric bill can have a locked-in rate and not be subject to the proposed annual rate increase of about three percent.

RePower LA is seeking an accessible program for L.A. city residents, more than 45 percent of whom live below twice the federal poverty line, according to the U.S. Census.  The program should serve those who cannot afford current solar programs.  Under the LADWP proposal, low-income customers who currently receive monthly subsidies could apply the subsidy to purchase solar shares. The program would also help create good, career-path jobs for entry-level workers.  The solar panels would be installed by participants in the International Brotherhood of Electrical Workers (IBEW) Local 18’s Utility Pre-Craft Trainee program (UPCT) under the supervision of skilled journey-level workers.

The UPCT program was formed in response to the need for skilled craft workers at a LADWP where 40 percent of the workforce is at or near retirement age. With 170 program participants thus far, individuals earn $16 an hour plus benefits while they are being trained on the job. UPCTs are trained in areas of utility craftwork, including energy efficiency upgrades, water conservation and, soon, in solar installation. The program has a proven track record of placing entry-level workers in permanent jobs at LADWP. Critical for South L.A., the program has included a diverse group of workers, including those with barriers to employment.

The details for LADWP’s Community Solar proposal still need to be worked out and SCOPE, along with other members of the RePower LA coalition, will be watching the department closely.  What’s clear from a recent focus group conversation with our membership is that the program must include a strong community outreach component so that people are aware of the program’s existence and know how to take advantage of it.

The full promise of solar can only be realized when greater focus is placed on designing renewable energy programs that are equitable and truly benefit everyone.

Gloria Walton is the President and CEO of Strategic Concepts in Organizing and Policy Education (SCOPE).
Related Topics:IBEW 18LADWPsolar powerSouth Los Angeles
Up Next