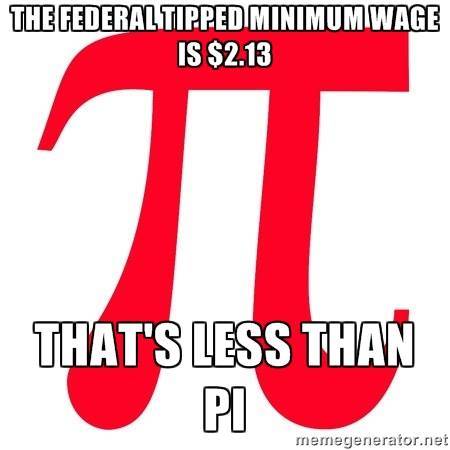 Are zero-dollar pay stubs and sub-minimum wages really what keep the restaurant industry afloat? That’s what one powerful lobbying group would have us believe.

Taylor Lee can tell you the real impact of minimum wages for tipped workers. Taylor is a 23-year-old restaurant server working in Berkeley, California. Like two-thirds of tipped workers, she is a woman. In California, the minimum wage is currently $8 per hour, whether you get tips or not. This is the amount that Taylor’s employer pays her, “but with tips, if it’s really slow, I make $12 per hour,” she says. “My average wage is about $18-20 per hour.”

From 2006 to 2013, Taylor worked as a server at restaurants in Florida. The minimum wage in Florida is $7.93, but the minimum wage for tipped workers is $4.91. She worked at a Japanese restaurant as a server. If she didn’t get enough tips to make it to $7.93 per hour, “it was kind of seen like, ‘you make a lot on other days so it kind of balances out.’ But that wasn’t true. I was younger then and I wasn’t aware of the labor laws, so I didn’t know they had to compensate up to the minimum wage.”

We’re lucky in California, which is one of only seven states that don’t have a subminimum wage for tipped workers. But the vast majority of states still have $2.13 as the tipped minimum wage, and it’s been at this level under federal law for 23 years now because of the lobbying of the National Restaurant Association, or “the Other NRA,” as the Restaurant Opportunities Centers (ROC) United lovingly calls this powerful lobbying group. (Click here to read ROC’s new exposé on The Other NRA.) The Other NRA’s 52,000 members include McDonald’s, Darden (owner of Red Lobster, Olive Garden and other chains) and Starbucks.

As states around the U.S. now move to raise the minimum wage because of inaction in Congress, some are continuing to exclude tipped workers from the wage increase. These include Connecticut and Maryland, which recently passed legislation to raise their state’s minimum wage to $10.10 per hour, without an accompanying increase in the tipped minimum wage.

Most tipped workers (63 percent) are restaurant workers – servers, bussers, bartenders. Half are 30 years old or older. One in seven tipped workers rely on SNAP benefits (formerly called food stamps). In states with the $2.13 subminimum wage, tipped workers of color live in poverty at nearly double the rate of those in states with the highest minimum wage.  And at $2.13, workers commonly receive a paycheck that states, “This is not a paycheck” for zero dollars, because their meager hourly earnings have gone entirely to taxes.

The Other NRA argues that raising the tipped and the regular minimum wage would force restaurants to cut hours, limit hiring and increase prices, and overall damage the restaurant industry.  But, in fact, the opposite is true.

Even the Wall Street Journal, not exactly the paragon of progressive reporting, wrote on April 8, 2014 that “higher wages don’t always take a bite out of restaurant employment.”

Taylor, the restaurant server in Berkeley and also a member of the Restaurant Opportunities Center in the San Francisco Bay Area, says, “It’s definitely more stable in California because you know that at the very least you’re getting $8 per hour, which isn’t enough because the cost of living is so high, but then you know you’re getting tips. But in Florida, even though the cost of living isn’t so high, you don’t have any saved money. The days that you’re not making tips, you’re not pulling in much income.” She adds, “It seems like restaurants are doing fine in California with paying $8 per hour to servers.  It’s still so little money.  I don’t think it has any adverse effect.”

Even though a few dollars may be “so little money” for most restaurants, it means a great deal to workers like Taylor. Like most restaurant workers, she works part-time, and her shifts can vary from two to eight hours per shift. Earning the full minimum wage in addition to tips can mean the difference between making a living and living in poverty. She notes, too, that tipped workers include bussers, hosts/hostesses and food runners. “They are classified as tipped workers, but their tips are substantially low,” she explains.  “As a result, they are very dependent on their minimum wage being equal to the minimum wage of non-tipped workers.”

On April 29 and 30, the Other NRA will be in Washington, D.C. to lobby Congress. So, on April 28 and 29, ROC United is leading a coalition of groups, including the Food Chain Workers Alliance, Anna Lappé’s Real Food Media Project, and other labor and food movement groups, in launching a campaign to Stop the Other NRA with an ad in the New York Times, a rally in D.C., and visits to Congressional members. The campaign is asking restaurants to pull out of the NRA and members of Congress not to take money from the Other NRA — not only for its efforts to stop increases in the regular and subminimum wages, but also because of its lobbying against common sense public interest and safety laws and regulations. This includes blocking federal voluntary guidelines on junk food marketing to children and opposing the Pregnancy Discrimination Act and the Family Medical Leave Act.

Join us in sending a message to your Congressional representatives asking them to stop taking money from the Other NRA at StopTheOtherNRA.org!