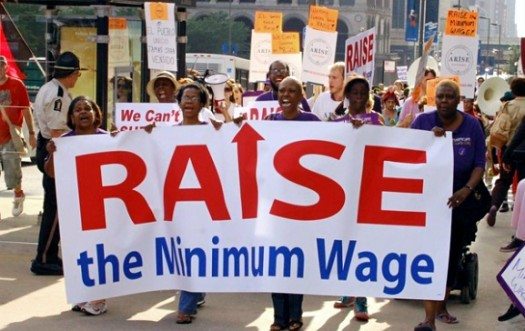 This basic fact is lost on opponents of minimum-wage increases, who for decades have been arguing that these pay hikes hurt businesses, cause job loss and therefore are bad for the economy.

Repetition of an argument might keep it in the news, but it doesn’t make it factually credible. So it is with minimum-wage rejectionists, who have succeeded in getting at least equal time for their assertions with every proposed wage increase, even though their claims have been debunked over and over again.

It is no surprise, then, that the Reason Foundation’s Adam Summers in his op-ed in the Business Journal predicts dire consequences if California were to increase its minimum wage law (“Higher Minimum Wage Will Lower Job Prospects,” February 11). Summers, like many before him, conjures images of economic catastrophe, cautioning that “for local and state businesses teetering on the edge of survival, the increased costs of a minimum-wage increase could be the last straw.” As evidence, he points to efforts by a few companies to avoid compliance with a hotel minimum-wage law passed by Long Beach voters in November.

The fact that wealthy companies will try to find ways to pay their workers less than the law requires isn’t evidence the laws don’t work. Summers ignores the fact that approximately 1,900 Long Beach hotel workers have received a wage increase because of the new law, focusing instead on a couple of bad actors trying to find loopholes and avoid compliance. He also neglects to mention that the hotel minimum-wage increase was overwhelmingly supported not just by voters, but by small businesses in Long Beach, which understand that when the buying power of workers rises, it’s good for the economy. According to one study, the hotel wage increase will bring $7 million annually into that city’s economy.

Summers and other critics could learn a lot by looking at the large body of evidence about the economic impacts of minimum-wage increases in Los Angeles County. These statistics are consistent with research from across the country, which has shown over and over again that minimum-wage laws help workers without causing significant job loss or business flight – and are therefore good for the economy.

One of the most definitive studies of higher minimum-wage laws was released in 2005. Co-authored by two University of California economists and funded primarily by the Ford Foundation, the report examined the impact of the city of L.A.’s original living-wage law (full disclosure: Researchers with my organization, LAANE, co-authored the study). This ordinance, one of the broadest in the country, was enacted in1997 despite furious opposition from business leaders, who warned of massive job loss and economic dislocation.

The study found just the opposite. L.A.’s wage law increased pay for an estimated 10,000 jobs with minimal reduction in employment. “Most firms affected by the law have adapted to the living wage without eliminating jobs,” concluded the study’s authors. The report also revealed that most of the workers covered by the law were in poor or low-income families– upending another favorite myth that minimum-wage laws do not target the people who really need them. These workers saw an average pay increase of 20 percent, or $2,600 a year, and kept 70 percent of that after taxes, meaning they had more money to spend – and pump into the local economy. Affected employers, meanwhile, experienced a drop in turnover from workforce better able to make ends meet.

Another city of L.A. wage law covering hotel workers nears Los Angeles International Airport has yielded similar results since its implementation in 2008. The Century Corridor hotel sector is thriving while hotel workers have seen significant increases in their pay, generating an estimated $5.4 million in additional revenue for the local economy. A 2011 increase in the wage rate for workers at LAX, meanwhile, has boosted pay to $15.37 an hour without any reported job loss or negative business impacts.

Los Angeles is no anomaly when it comes to minimum-wage increases. That’s why some of the most eminent economists in the country, including Nobel Prize winner Joseph Stiglitz and Harvard University’s Richard Freeman, delivered a letter last summer to President Obama and top congressional leaders urging them to raise the federal minimum wage. “(T)he weight of evidence now (shows) that increases in the minimum wage have had little or no negative effect on the employment of minimum wage workers, even during times of weakness in the labor market,” stated the letter. “A minimum-wage increase can also serve to stimulate the economy as low-wage workers spend their additional earnings potentially raising demand and job growth.”

Whether in Long Beach; Los Angeles; or Washington,D.C.; opposition to minimum-wage laws is driven by ideology and greed – not facts. Critics have the right to tell us the sky is about to fall, but isn’t it about time that we stop listening and instead create a truly sustainable economy?

(This feature first appeared in the Los Angeles Business Journal and is republished with the author’s permission.)

The Right to Be Poor: Matt Yglesias’ View of Minimum Wage Laws

The Sequester: Families and Kids Not on Congress’ Agenda