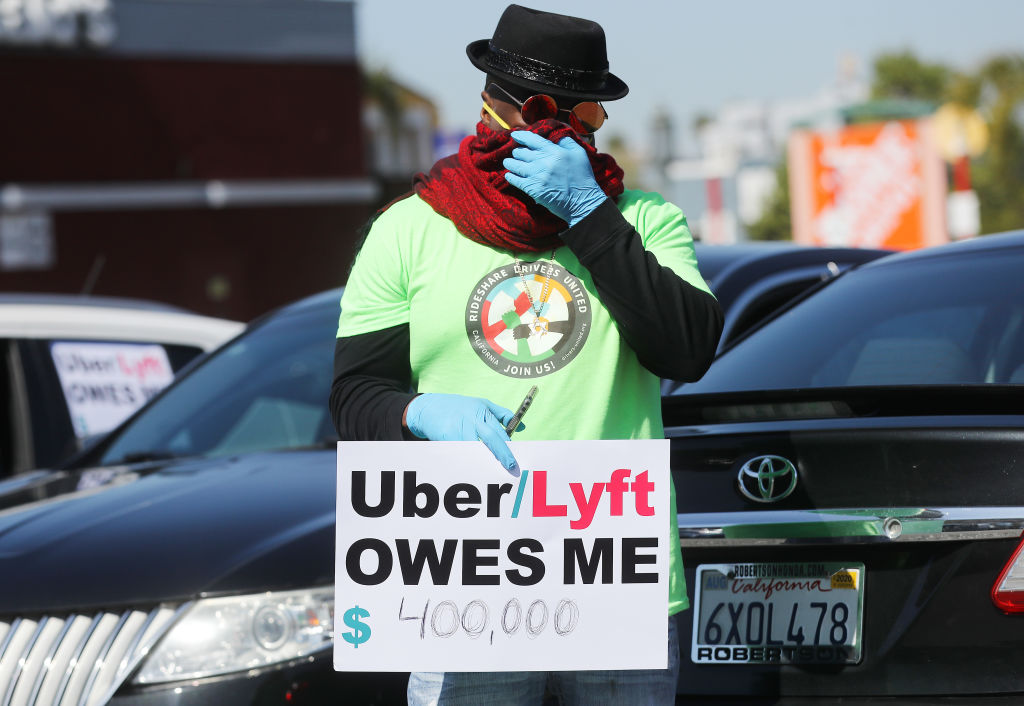 Murphy, an organizer with Rideshare Drivers United, hasn’t gotten behind the wheel of her car since the pandemic began, faced with what she called a “devil’s choice” – driving and risking her health, or staying home and filing for unemployment without a W2 tax form, which is only given to employees in California.

“They wrote this initiative to circumvent the law designed to give us dignity and respect,” she says.

The ballot initiative Murphy is referring to, Proposition 22, would undo the employee status granted to drivers under Assembly Bill 5, legislation enacted earlier this year mandating that gig companies (including Prop. 22’s main creators, the rideshare giants Uber and Lyft) file their workers as employees under a stricter A-B-C test.

Most rideshare and delivery workers are people of color. A study conducted in San Francisco found that over 50% are immigrants.

According to Proposition 22’s opponents, rideshare drivers would lose sick leave, overtime, discrimination protections and the right to organize under the National Labor Relations Act granted to them by AB 5. Prop. 22 also prevents regional governments from enacting protections for rideshare drivers on a local level, thus standardizing rideshare law across California. Any amendments to the measure would require a 7/8ths vote of approval in the state legislature, a “lock-in” device critics say will be nearly impossible to overcome.

Both sides agree, however, that the majority of rideshare and delivery workers are people of color. A study conducted in San Francisco found only 22% of drivers there were white. Over 50% were immigrants. Michael Reich of the University of California, Berkeley, Institute for Research on Labor and Employment found similar numbers in studies conducted in New York and Seattle, he told Capital & Main in an email.

And yet a number of civil rights groups have endorsed the measure, including the California chapter of the National Association for the Advancement of Colored People and some of its local branches, arguing that employee status will mean the loss of hundreds of thousands of jobs. (Last month CalMatters reported that a political consulting firm run by Alice Huffman, president of the state NAACP, had accepted $85,000 from Yes on 22.)

Driver Cherri Murphy worries she will be vulnerable to discrimination and harassment if the ballot measure passes because, she says,  discrimination protections weaken under Proposition 22 compared to California law.

The companies’ threats to leave California are empty, insists Reich’s UC Berkeley colleague Ken Jacobs. Such job-loss estimates, he says, assume AB 5 will force all drivers into working full-time, but part-time workers can be employees, too.

“Some of the stuff that they put out is just silly,” he says. “They may employ fewer people over the course of the year by providing better wages and benefits, but generally we think that’s a good thing, that turnover would go down.”

“If everybody quit constantly it would be easier for people to find jobs, but we would rather not have a world in which everything is so unstable that everyone is in the job market,” he adds.

The ballot measure also does not cover protections for third party discrimination, such as harassment of drivers by passengers, says Fuentes. Geoff Vetter, a spokesperson for the Yes on 22 campaign, says in an email that the measure contains “new and unprecedented protections,” and that immigrants are protected from harassment under California’s Unruh Act. But Prop. 22 will fall under the Business and Professions Code, says Fuentes, leaving workers unable to pursue Unruh Act violations.

Yes on 22 says the ballot measure will guarantee drivers 120% of the minimum wage, but UC Berkeley researchers say real wages could potentially sink to as low as $5.64 per hour.

“I’ve been called names,” says Murphy. “There have been times where I picked up individuals who were verbally abusive and attempted to steal my phone.” Because one abusive customer made a complaint, Lyft deactivated Murphy’s account.

Yes on 22 says the ballot measure will guarantee drivers 120% of the minimum wage. Reich and Jacobs say real wages could potentially sink to as low as $5.64 per hour under the measure, which makes companies pay only for driver-engaged time — the time spent driving a passenger and time spent on the way to pick up a passenger.

Yes on 22 uses an engaged time model to ensure workers can’t take advantage of gig companies, says Vetter. “If all on-app time was compensated, many people might choose to simply turn on their apps and stay online without accepting a trip,” he writes.

Vetter also pointed to a UC Riverside study, funded by Uber and Lyft, that found drivers would make “at least $25 per hour” under the ballot measure after expenses.

But Reich and Jacobs say the studies backed by Uber and Lyft underestimate costs like gas, vehicle damage and car-value depreciation, in part because those studies discount expenses incurred outside of engaged time. While Proposition 22 would reimburse drivers 30 cents per mile, the IRS calculates a 57.5 cent reimbursement rate.

Proposition 22 would make the creation of a state labor board for rideshare drivers extremely difficult.

When asked about the discrepancies in mileage rates, Vetter says Prop. 22 allows drivers to claim both. But Vetter’s argument, Jacobs replies, is that drivers can collect an inaccurate reimbursement from their employer — and then later, when they file their taxes, accurately assess the damage to their automobile. (“The fact that they under-reimburse does not stop people from being correct about their expenses when they file their taxes, but that’s not something they’re getting from Uber and Lyft,” he says.)

“There is massive cost involved in this work, to the point where much of the pay is gone,” says Edan Alva, a Lyft Driver in Alameda, who volunteers with Gig Workers Rising. “I would end the year with five flat tires. I had a cracked windshield. I had car engine problems. Eventually my car died, by the way. People bring their car in to work [for gig companies] and end up losing the entire car.”

Jacobs and Reich took research conducted by Uber and Lyft of their own drivers and calculated net pay, factoring in higher expenses and discarding the engaged time model. The majority of drivers studied were making less than the California minimum wage, they found. Even an Uber and Lyft-funded study in Seattle found a quarter of drivers were making less than minimum wage, says Jacobs.

“On a daily basis it’s like Russian Roulette,” Alva says of trying to survive on gig work in the Bay Area.

“If everything goes okay, if you get sufficient rides, if nothing goes wrong with the car, if nothing goes wrong with all the stuff you’re doing, no accidents or nothing, you can get another day to live by,” he says. “If something does happen, and I’m talking about things that are sort of minor for normal people, like cracked windshields, flat tires, getting sick for a few days, things that happen during the year – these things can render you homeless.”

Should the measure fail and rideshare companies be forced to comply with AB 5, Reich estimates wages will increase for drivers by 30%.

When progressives wrote modern labor law in the New Deal era, agricultural and domestic workers were denied employee status in key labor legislation. Those professions were predominantly Black and their exemption a transparent bid to win the votes of Southern Dixiecrats for President Roosevelt’s programs. The National Labor Relations Act, the Social Security Act, the Fair Labor Standards Act and others denied Black Americans the rights of employees, says attorney Saru Jayaraman, just as rideshare drivers of color are denied those rights by Proposition 22.

“It’s the same idea, exempting all these groups of Black workers from protections that came from the New Deal,” she says.

Following years of bloody conflict among the United Farm Workers, growers and the Teamsters in California fields, the state created its own labor board in 1975 to oversee union elections for agricultural workers — filling at least one gap left by the National Labor Relations Act 40 years before.

Bethsaida Ruiz drove with child transportation service HopSkipDrive and found her way to Gig Workers Rising when the coronavirus arrived in the United States. A resident of Oakland for 40 years, she worries she will lose her house if she doesn’t find new work.

“When the pandemic hit, I applied for unemployment and was denied because I was not considered an employee of HopSkipDrive,” she says. Ruiz successfully worked with a lawyer to get Pandemic Unemployment Assistance, available to independent contractors, in spite of the fact that AB 5 had mandated she become an employee on January 1, 2020.

Meanwhile, Yes on 22 insists drivers are in support of the measure by a four-to-one margin. “More than 100,000 drivers have signed up to support Prop. 22, the largest group of drivers ever organized,” a spokesperson for the campaign wrote in an email. “They support Prop. 22 because they can keep their independence and get new benefits.”

A September poll showed the measure ahead by roughly 9%.