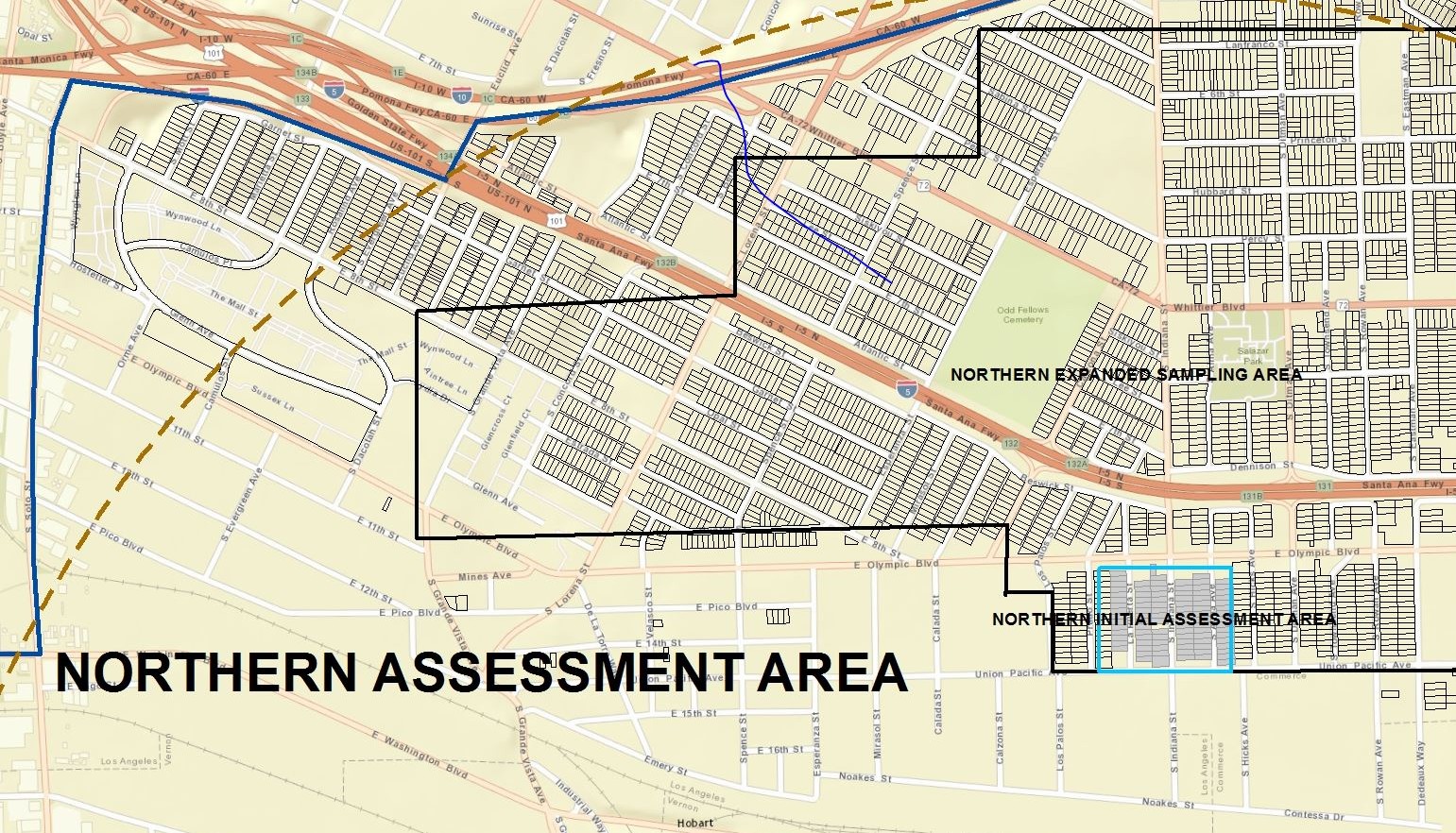 Detail from a Dept. of Toxic Substances Control map showing some affected neighborhoods near the closed Exide facility.

As many as three companies are currently in preliminary discussions to purchase the site of Exide Technologies’ former lead-battery recycling facility in the city of Vernon, near downtown Los Angeles.

According to Roberto Puga, trustee of the Vernon Environmental Response Trust, which assumed control of the property through a federal bankruptcy ruling last October, “We are at the very beginning stages of our discussions” with the potential purchasers, who have asked to remain anonymous for the time being. “They realize that this is a hot-button project, and they’re just exploring whether the site would work for them,” he added.

“Isn’t this putting the cart before the horse, selling the Exide facility before it’s cleaned up?”

Local residents and environmental groups, however, voice fears about any sale’s impact on the existing contamination at the site, alongside potential effects from future industrial use in an area that’s already one of the most heavily environmentally burdened in the state.

Vernon’s website says the property is zoned for commercial usage, including truck and freight terminals, and for rendering operations. Community advocates, however, want to see the facility utilized to deliver environmental and economic equity in one of the poorest and most polluted regions in Los Angeles County.

“The hope that we’ve talked about on our organizing team is how can we actually build an industrial corridor that has very little environmental impacts on the communities?” said Jennifer Ganata, senior staff attorney with Communities for a Better Environment, a local advocacy organization. “Right now, there are lots of different opportunities to try something different.”

Some critics are raising an even more fundamental question.

“Isn’t this putting the cart before the horse, planning on selling the Exide facility before it’s cleaned up?” emailed Jane Williams, executive director of California Communities Against Toxics and a member of the Exide Advisory Group.

For decades, the formerly Exide-owned facility released a toxic brew of chemicals, including lead and arsenic, into the surrounding communities until the plant was shuttered in 2015 — but not before an estimated 10,000 homes had been impacted. In October of last year, a federal bankruptcy court agreed to a settlement between Exide and the U.S. Department of Justice, which proffered control of the facility site to the Vernon Trust.

At the same time, the agreement allowed the company to essentially escape its financial obligations to finish remediating the facility site and the vast contamination of adjacent neighborhoods. The latter cleanup has already crossed the quarter-billion-dollar mark, nearly all of it California taxpayer funded, and is expected to eventually cost some $650 million.

Some local residents fear that any sale will give authorities tacit approval to walk away from the remaining pollution at the site.

According to Puga, the some $29 million in the Vernon Trust will be used to remove the main industrial buildings that still exist on the 15-acre property, a project expected to be completed by the end of 2021. “All of those buildings will be decontaminated and deconstructed, so they will be gone, and in their place will be a flat, paved area,” said Puga. He added that Vernon Trust money will also be used to “caretake” the property for an additional year.

The sale of the property, said Puga, could fetch between $10 million and $20 million. “It would be fantastic if we could agree to a deal and try to get it done within this calendar year,” he added. “That would be an ambitious goal.”

Proceeds from the sale will be used to “further the demolition and decontamination efforts,” wrote Amanda Cruz, a scientist with the U.S. Environmental Protection Agency (EPA), which has oversight of the facility cleanup alongside the state’s Department of Toxic Substances Control. Officials have estimated that the full remediation of just the facility site could reach $72 million or more. As such, some local residents fear that any sale will give authorities tacit approval to walk away from repairing the site’s remaining soil and extensive groundwater pollution stemming from the facility’s operations.

“I’m concerned about the contamination that exists there,” said Monsignor John Moretta of the Resurrection Church in nearby Boyle Heights. If that pollution isn’t tackled now, he added, “other generations are going to pay for it.”