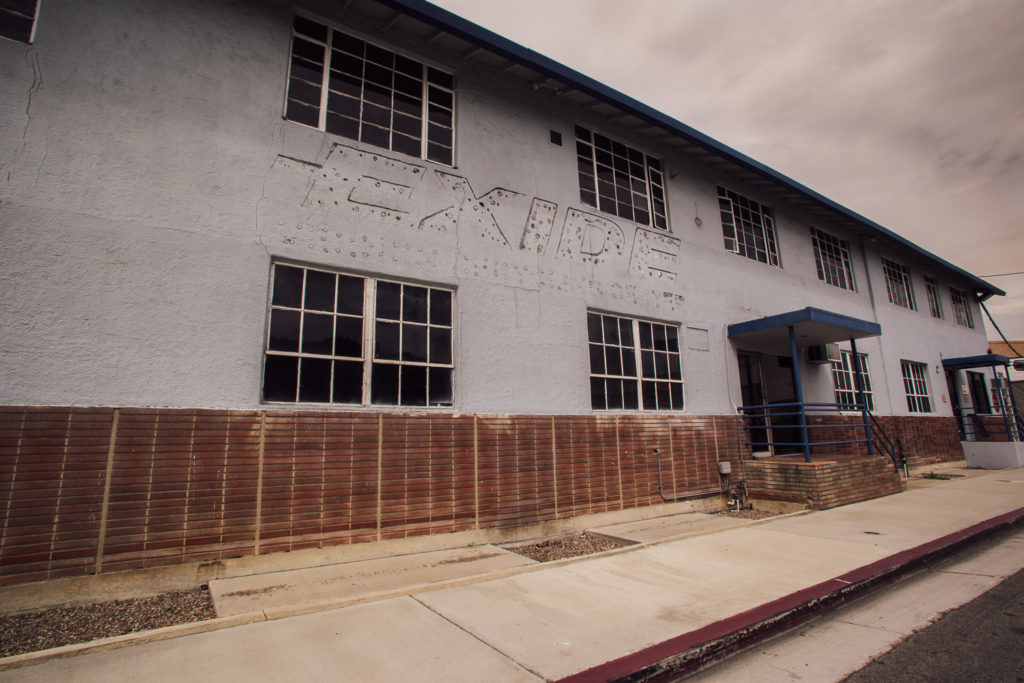 Terry Cano and Joe Gonzalez are sick to their back teeth.

The sister and brother are both battling chronic health issues. Gonzalez, 63, was diagnosed in 2014 with a rare form of cancer of the nasal cavity that has since spread, and says his prognosis is terminal. Cano, 48, has suffered a series of large and small strokes, and battles an array of health issues, including liver disease that is unrelated to alcohol and drug use, cervical spondylosis, a degenerative spinal condition, hypertension and fibromyalgia.

Also Read: “Why Is It Taking So Long to Clean Up L.A.’s Exide Mess?”

Cano and Gonzalez live together in Boyle Heights, about a mile and a half from the Exide battery recycling facility that was shuttered in 2015 after the plant, located near downtown Los Angeles, had for decades spewed such toxic contaminants as lead and arsenic into surrounding communities. Aside from being a potent neurotoxin, lead is a probable carcinogen known to cause high blood pressure and heart and kidney disease.

Boyle Heights Resident: “You get to a point beyond anger and you’re just left with heartbreak. I don’t think it will ever be cleaned.”

The lead levels in the siblings’ backyard are more than double a state residential soil screening threshold, and the pair fear the contamination not only helped cause their illnesses but makes them worse. Because the soil lead levels aren’t high enough, however, there’s currently no specific funding to remediate their home. Five years into the cleanup around Exide, Cano and Gonzalez are literally sick of waiting to hear when—or even if—it will ever happen. “You get to a point where it’s beyond anger and you’re just left with heartbreak,” says Cano. “I don’t think it will ever be cleaned.”

Capital & Main has chronicled the timeline of the ongoing residential cleanup around Exide—a story of confusion, shifting goalposts, missed deadlines and bloated budgets. But how has this affected those living on the front line of a cleanup that officials from the Department of Toxic Substances Control (DTSC)—the state agency responsible for overseeing the project—describe as the largest, most complex such undertaking in its history?

Alongside fears that not all affected properties will be remediated are concerns that the DTSC’s cleanup approach has led to recontamination. All the while, the human health impacts still haven’t been accurately gauged, with an overwhelming majority of potentially at-risk residents yet to be tested for lead in their bodies. This, in an area that is already one of the most environmentally burdened in California. Many in this largely working-class Latino community feel forgotten, disposable and cheated.

The overwhelming majority of potentially at-risk residents has yet to be tested for lead in their bodies.

“If this was happening all over the place like COVID-19 is, we would have had this cleaned up immediately,” says Cano, frustrated with the DTSC’s slow rollout of the remediation around Exide when compared with the state’s swift mobilization of services in response to the spread of the coronavirus. “The state should have declared this an emergency because there’s no way they’re going to clean this up in a timely manner.”

“We don’t know how problematic this phenomenon is”

Since 2014, the DTSC has ordered testing of some 8,555 homes for lead contamination within a 1.7-mile radius of the shuttered Exide facility. The agency had given itself until June 2021 to clean 3,200 of the worst contaminated homes—those with lead in their soil above 330 parts per million (ppm). But that timeline was set up before the coronavirus pandemic erupted — the residential cleanup was recently suspended completely. What’s more, the DTSC currently has no funding and no concrete plan to remediate the 4,753 homes that have a soil lead concentration of between 80 ppm—a state screening threshold—and 330 ppm.

That 80 ppm number is proving contentious. Back in 2017, the DTSC stated how it “maintains a target cleanup goal of properties with lead sampling results that exceed the representative soil lead concentration of 80 ppm.” But in a recent email to Capital & Main, an agency spokesperson stressed that 80 ppm is not a “cleanup level,” and that the agency has used a federal standard of 400 ppm to prioritize which homes were cleaned first.

Within the cleanup radius 1,600 homes have yet to be tested for lead contamination, despite sitting amid some of the highest soil lead hotspots.

According to Assemblymember Miguel Santiago (D-Los Angeles), all homes with soil lead levels above 80 ppm should be cleaned, and the costs “will have to come from Exide.” Nevertheless, the state is currently fighting with the company over who’s financially liable for cleaning the polluted homes around its former lead recycling facility.

In its 2019 Corrective Action report, Exide claims it was not responsible for creating lead levels in the surrounding community that are high enough to warrant remediation and is therefore not obligated to clean up the affected areas. The DTSC has rejected these claims and, as legal leverage, has asked the U.S. Attorney’s Office to end its non-prosecution agreement with Exide that spared the company federal prosecution if it complied with DTSC’s orders on the cleanup.

Because of the legal complications surrounding cost recovery, however, Mark Lopez, executive director of East Yard Communities for Environmental Justice, a community-based nonprofit, would like to see money from the state’s battery tax—which creates a cleanup fund for lead contaminated communities—funneled toward the remaining residential remediation. “If that’s how it needs to be paid for, that’s how it needs to be paid for,” says Lopez, who sits on the Exide Advisory Group, a team of experts put together to listen to community members’ thoughts and concerns. “We need a stable source of funding.”

Within the 1.7-mile cleanup radius there remain some 1,600 homes that have yet to be tested for lead contamination, despite their location amid some of the highest soil lead hotspots. According to the DTSC, that’s because the homeowners haven’t granted the agency access.

Local blood tests show that in some cases, the highest lead exposures occurred while babies were in the womb.

Felipe Aguirre, who lives within that radius, explained that inherent mistrust of government among local residents is exacerbated by the way the cleanup has been managed— specifically, there are fears of cross-contamination by the DTSC’s patchwork approach to the cleanup, where some homes have been remediated and adjacent properties are left untouched. “They should have gone around and said, ‘Everybody gets their house cleaned,’” block by block, says Aguirre, 67, a longtime active member of the community.

This checkerboard approach—one historically opposed by county health officials—was undertaken to prioritize the cleanup of the most impacted homes, along with facilities that cater to the youngest and most vulnerable, including day care centers. The DTSC is “sensitive to the residents’ schedules and works with them to minimize disruption,” claimed an agency spokesperson via email.

The DTSC currently has no plans to require soil sampling after cleanup, however, and Jim Wells, an environmental geologist who also sits on the Exide Advisory Group, warns that this “piecemeal” approach to the cleanup “gives rise to the possibility of cross-contamination.”

This problem, says Wells, is compounded in other ways. Large parts of the neighborhood, such as its parkways—strips of grass or dirt between the sidewalks and streets—have still to be cleaned, and contaminated soils have likely been traipsed back onto remediated properties by foot. Where home interiors have been remediated, Wells adds, areas like attics have been left untouched as a matter of protocol. The parkway cleanups aren’t expected to begin for at least another year.

Even low levels of lead exposure have been linked to societal problems, such as increased risks
of crime and poor educational performance.

On top of that, the South Coast Air Quality Management District has issued Exide two violations within the last 12 months for minor breaches of an enclosure used in the remediation of the plant itself. In February alone, the agency issued two contractors separate violations for their management of contaminated soils when remediating homes.

“We don’t know how problematic this phenomenon of cross-contamination is,” says Wells. “So, let’s go back and measure. We’ve got lots of resources to do that.”

When it comes to measuring the human health impacts from the contamination, significant data holes remain.

A 2016 health study found nearly 300 children under 6 living near the Exide site had elevated blood lead levels. In more recent years, the Los Angeles County Department of Public Health has conducted some 100 outreach events providing community members the chance to get their blood tested. Ninety-nine percent of the adults over the age of 18 tested lower than a Center for Disease Control reference value of 5 micrograms per deciliter—a level the agency uses to identify children with unusually high blood lead levels. But these results paint a narrow picture of the potential problem.

For one thing, public participation has been very low. By the end of 2019, a little more than 6,000 residents—from 100,000-plus people estimated to be at risk—have had their blood tested, and only five percent have been children age 5 or less, the  group most vulnerable to health impacts from lead exposure. Charlene Contreras, area manager for the county health department, stresses the program’s logistical difficulties, especially in communities with a high turnover of renters and large immigrant populations already wary of the government. “The greater risk is [that,] as people are moving in and out of the community, [they are] not made aware that there is lead on that property that has not been cleaned up,” she says.

Then there’s another issue: These blood tests show only recent exposure to lead—within 30 to 45 days—and fail to quantify long-term impacts from lead exposure. A study headed by the University of Southern California last year suggests that more comprehensive testing needs to be done among the youngest residents around Exide to better understand this problem. Researchers collected 50 baby teeth from 43 children in five communities and found that higher levels of lead in the soil correlated to a higher lead level in the teeth. In some cases, the highest lead exposures occurred while babies were in the womb.

“Any detectable level” of lead in the blood is a concern, says Jill Johnston, an assistant professor of preventive medicine at USC’s Keck School of Medicine and the chief researcher on the study.

A growing body of research shows possible links between even low levels of lead exposure in a given area and broader societal problems, such as increased risks of crime and poor educational performance. In that latter regard, the county has secured roughly $1.8 million in funding from a legal settlement to conduct a pilot program for young children in the area to catch developmental delays and learning disabilities and provide services, says Contreras.

Even so, the state has still to really grapple with the broader “compounded health issues” from the long legacy of pollution in the area, says Assemblymember Cristina Garcia (D-Bell Gardens), who adds that many of her constituents who live close to the plant are starkly aware of the health risks that ongoing lead exposures pose: “It’s not just frustrating, it’s heartbreaking.”

Joe Gonzalez, too, is worried that “thousands of people in the neighborhood have had their lives damaged, completely destroyed.” But for now he has one high priority: getting his home cleaned before he dies.

“At some point down the line, somebody needs to be held accountable,” he says.

Topic of Cancer: How PFAS Threaten Our Water