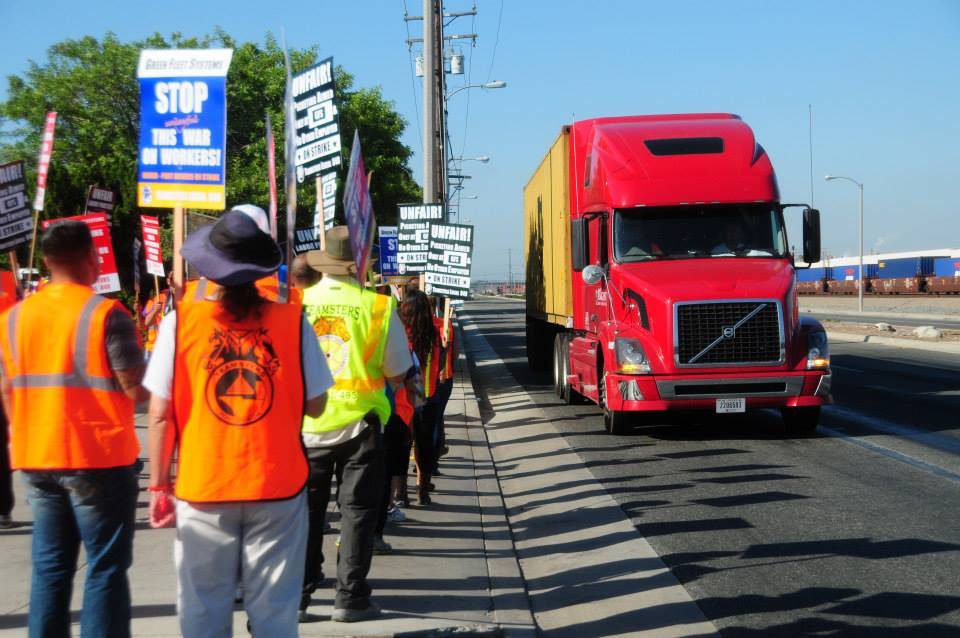 For the fourth time within the past year, port truck drivers have struck short-distance hauling companies over a list of unfair labor practices that include low pay and the endemic misclassification of drivers as “independent contractors.” Misclassification has condemned drayage employees who work at the Ports of Los Angeles and Long Beach to a status of modern serfdom. Port drivers often work 16 hours a day and are financially responsible for the fueling and upkeep of their high-maintenance vehicles – yet their take-home checks can amount to less than minimum wage, thanks to company deductions that charge drivers for everything from gas to insurance.

The strike began early Monday, when drivers who work for Green Fleet Systems (GFS), Total Transportation Services, Inc. (TTSI) and Pacific 9 Transportation (Pac 9) began picketing the companies’ truck yards, as well as the marine terminals of the two giant ports, which receive 40 percent of the nation’s imports. What sets this action apart from previous walkouts is the indefinite nature of the current strike – the earlier actions were confined to one or two days and their conclusions were announced in advance.

The drivers, who haul imported consumer goods for such companies as Walmart, Home Depot, Skechers and Polo/Ralph Lauren, say they are fighting for a place in America’s vanishing middle class.

Over the past year, port drivers have won a string of labor-court lawsuits that have found trucking companies liable for back wages and that have challenged the firms’ claims to have engaged the drivers as independent contractors rather than as company employees.

One driver, Alex Paz, told a noon media conference held in Wilmington that he had been fired from TTSI in retaliation for testifying at one such trial.

“We won’t back down,” Paz said. “We’ve come out of the shadows and we’re staying out here until the industry changes.”