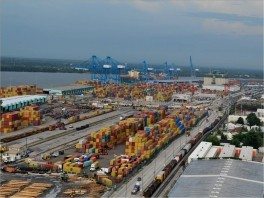 Federal Mediation and Conciliation Service Director George H. Cohen today announced the extension of contract talks between the East and Gulf Coast longshore union and shipping-industry management. The agreement, which apparently has resolved the thorny issue of container royalties, averts an International Longshoremen’s Association strike that had been scheduled to take place Sunday.

“I am extremely pleased to announce that the parties have reached the agreements set forth below as a result of a mediation session conducted by myself and my colleague Scot Beckenbaugh, Deputy Director for Mediation Services, on Thursday, December 27, 2012:

“The container royalty payment issue has been agreed upon in principle by the parties, subject to achieving an overall collective bargaining agreement. The parties have further agreed to an additional extension of 30 days (i.e., until midnight, January 28, 2013) during which time the parties shall negotiate all remaining outstanding Master Agreement issues, including those relating to New York and New Jersey. The negotiation schedule shall be set by the FMCS after consultation with the parties.”

“Given that negotiations will be continuing and consistent with the Agency’s commitment of confidentiality to the parties, FMCS shall not disclose the substance of the container royalty payment agreement. What I can report is that the agreement on this important subject represents a major positive step toward achieving an overall collective bargaining agreement. While some significant issues remain in contention, I am cautiously optimistic that they can be resolved in the upcoming 30-day extension period.”

“On behalf of our Agency, I want to thank the parties, especially ILA President Harold Daggett and USMX Chairman & CEO James Capo, for their ongoing adherence to the collective bargaining process, which has enabled them to avoid the imminent deadline for a work stoppage that could have economically disruptive nationwide implications.”

Walmart to Police Its Subcontracted Warehouses

Eastern Docks Headed for a Rumble?