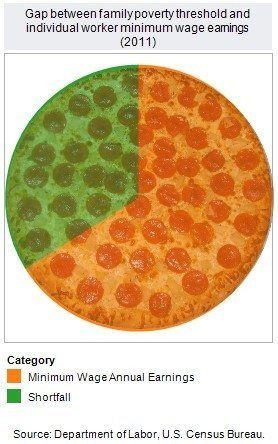 My grandchildren live on pizza. Oh, they eat other things that young children like, but whenever mom or dad work late or events intervene, the call goes out for pizza man to deliver.

I was thinking about this when I read a piece in The Week a while back about franchisers who will soon need to cover the cost of health insurance for their low-wage workers or pay a fine. The case study focused on a guy who owns a string of chicken and Mexican fast food stops and who employs 425 workers. Some of these people run the front counter. Some do the deep frying. Some sweep up. None, apparently, have any health insurance.

The owner complains that providing these workers health insurance will cost him $546,000 a year – a cost that he says his business plan simply cannot support. Really? I thought. Let’s break that down. Divide the cost by the number of workers and it comes to approximately $1285 per year per employee. Divide by 12 months and the cost is $107/month per employee.

If the employee earns the current minimum wage at the California level of $8 an hour, the worker receives about $16,320 a year before taxes, or about $1360 a month. To this, mandatory health insurance would add $107/month or $27/week. That’s an increase of about 68 cents an hour. And this is way too much for a franchise owner to pay?

Of course, California’s minimum wage is already 75 cents an hour more than the federal wage. San Francisco set a minimum of $10.24 an hour – considerably higher but consistent with about what minimum wage would be if it had just kept pace with inflation between 1969 and the present. Other states have also set rates higher than the federal level as well, so the numbers will shift from place to place. But in some areas employers are already paying more, and adding a few quarters an hour doesn’t seem like it should break the bank.

But think about this: A single person trying to live on minimum wage earns enough to pay for an apartment somewhere away from the beach in Los Angeles. That’s just rent, not food, transportation, or clothes, much less health care. A couple – both working minimum wage – lives on half of what it takes to have a middle class life here. A family of four? Two people working? This is not a sustainable life in our city. Yet, at least half a million families struggle in this circumstance. Here, now.

One argument says that requiring employers to come up with health insurance money will make them uncompetitive in a globalized economy. Well, maybe, but not many pizzas get delivered from, say, Honduras or Cambodia. The competition in the fast food business is local.

Another argument suggests that asking private owners in this country to provide health insurance is unfair because other countries have single-payer systems in which everyone picks up the tab, thus leveling the playing field. Well, that’s true, and Congress should have been hearing from those businesses when the insurance companies were writing themselves into a cushy corner of the national health care law.

Another recent news item announced that health care might increase the cost of a large pizza by 20 cents – or one percent of the current price. Certainly paying a dab more for the pizza is worth making sure workers have medical coverage. Surely those two dimes are cheaper than the costs we currently pay when an uninsured worker who gets hurt on the job ends up in the Emergency Room. In fact, it’s about the amount of change my six-year-old grandchild drops out of his pocket on his way to the beach.