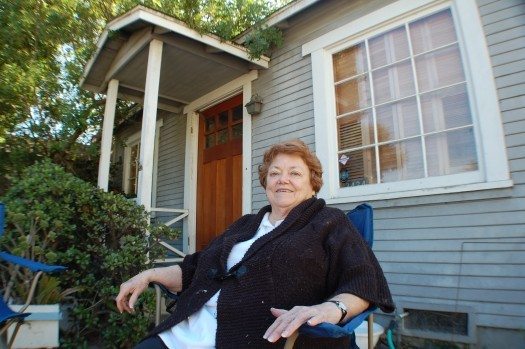 Frying Pan News recently spoke with some former state, county and municipal workers for a picture of how their retirements have been living up to their expectations.

Retired career librarian Norma Anders’ eyes light up when she speaks of her 30 years in the City of Los Angeles’ public library system. “We make a big difference,” she declares proudly. “We’re one of the forces that’s giving our country an educated workforce, an informed citizenry. [It’s how] we’re going to be able to keep our [nation] growing and growing.”

Anders is having her morning tea in the well-manicured front yard of the modest clapboard house she shares with her retired husband, David, and her son Lee, who has moved back home while he finishes an accounting degree at Long Beach State. A small, exuberant and cherubic woman of 72, Anders, but for her still-strawberry-blonde hair, is almost the storybook picture of the kindly old grandmother from “Little Red Riding Hood.”

But the wolves that have been showing up at her door are of a breed never dreamed of by the Brothers Grimm.

“Ends don’t meet,” she says flatly. “Our pensions are not keeping up with the cost of living . . . We’re always struggling to keep up with inflation.”

So nearly a decade after retiring, Anders found herself returning to work as a substitute librarian. She isn’t alone. “Every retired librarian I know has returned to substitute work, because the pension we thought would be adequate is not,” she says. “So we go back because it’s not stretching. We go back to help our families. Single moms have never quit. They’ve retired and then went to work as a sub and are still doing so, even though they retired in 2003 or 2004.”

Anders is more fortunate than many. Her gross annual pension is a tidy $49,000, and her husband Dave, who worked for L.A.’s Department of Water and Power, also draws a retirement income.

“At least we have a pension,” she says. “[But] Instead of helping us stay even kind of stable, it is inadequate to maintain where we were before we retired.”

Working in her 70s is a far cry from how Anders pictured the retired life.

“I imagined I’d be doing all these wonderful things,” she says, “including some travelling. I imagined we’d have a motorhome, so we could see the United States together . . . We didn’t travel much during our working years. But I always imagined I would be doing that, and I imagined that we would be able to afford to do that. And that wasn’t true. That did not come true at all.”

The shock of retirement came from routine expenses that she had taken for granted when she and her husband were both working.

“One of the things with retirement,” Anders says, “is you don’t set aside enough to be able to replace your vehicles. So my van is a 2003. David’s is 1999, I think. A little Ford Focus. Lee has a small Ford Ranger, and he just had to have $2,000 of work. I just had to have $700 done. So those are really serious bills, those repair bills that come around.”

Her biggest fear, however, remains her health and stamina.

“How long can I keep doing this before my body gives out?” she wonders. Her goal is to rack up the 40 calendar quarters of employment she needs to qualify for free Medicare. (As city workers, neither she nor her husband paid into Medicare or Social Security.) “Despite rumors to the contrary,” she says, “librarians are on their feet all the time they’re working. I’m 72 — my little body isn’t 40 anymore.”

Like his father before him, 68-year-old Jesse Espinoza has worked hard all his life. Partly, that’s because he’s had to. Married three times and divorced twice, Espinoza had six kids and three wives to support.

And over that lifetime, he’s mastered a dazzling variety of skills. Need a concrete driveway poured? You called Jesse. Need your house rewired or your kitchen remodeled or your bathroom re-plumbed? Jesse was your man. The same went for upholstery (cars or couches), custom-designed furniture or even welding.

But by the time Jesse was in his mid-50s, it finally sunk in that there might come a day when he couldn’t keep up his physically punishing pace. So in 1999, he jumped at the chance to apply for a position with the state of California. After  camping out overnight at a CalWORKS skills center, he got a job as a field maintenance worker for the Sacramento Employment and Training Agency (SETA), which administers the local Head Start program.

And for the next decade, he did his part to keep SETA’s 43 school buildings in good working order. But by 2009 the years and an accident had taken their toll on his legs, so he opted for retirement at 64. “[Working became] kind of hard,” he recalls, “because I had to carry backpacks, and I did a lot of walking and stuff. And [my legs] kind of started to bother me, you know?”

The other reason he took retirement, Espinoza admits, was to spend quality time with his grandkids, get in a little fishing on the Sacramento River and pursue his dream of designing and building fine furniture. In fact, his idea of rest and relaxation continues to be slipping out to his garage workshop and building whatever his current backyard construction project happens to be.

“I’ve always been a designer since I was a little kid,” he says. “I have my own style. That’s what people are looking for.”

But four years after leaving SETA, retirement hasn’t turned out quite as he expected. Despite a monthly pension check of $850 and an additional $1,100 from Social Security, Espinoza says that it’s a struggle just to make certain his health insurance premium gets paid.

“What’s so strange is that I retired and I had these goals and it didn’t happen,” he says. “And when you have all these bills and stuff coming at you, it just kinda takes all that away from you. So basically what I’m doing is working and trying to catch up with those bills.”

Which is why Espinoza recently returned to SETA as an independent contractor, filling in for vacationing or sick workers. That’s when he isn’t taking on some remodeling work to make ends meet.

And that quality time he imagined spending with his grandkids as a retiree? It turns out to be taking them along on a job.

“I had my grandson with me last Saturday,” Espinoza recalls. “Because I used to like to take him fishing or something. And I had him work with me for the whole day. I showed him how to rip out a whole floor, how to replace all the bad wood, and how to put tile on there. And he really enjoyed it. And I told him, I said, ‘You’re going to learn something big that you’re never going to forget.’”

When Patricia Everetts moved to the Bay Area in 1985 and landed a job with the Contra Costa County Superior Court as an account clerk, she thought she had hit the jackpot as far as providing for her family and her retirement security went. Her husband had recently died, and at age 47 she found herself supporting a disabled son and a grandson.

“I felt that by going into government I would have more of an opportunity to have a better retirement,” she says. “Because I did have some medical problems. And so I thought that it was secure and that I could retire from the courts and make a decent retirement.”

So for 18 years Everetts went to work auditing the administration and bookkeeping departments of Contra Costa’s courthouses, eventually working her way up to the position of grant accountant. She bought a house in Concord and life was good.

But a heart condition eventually caught up with Everetts (she’s had four stents and is about to get her third pacemaker), so in 2003 she was forced to take retirement at age 62.

Everetts quickly discovered, however, that even with the $1,400 a month she gets from Social Security, her $1,680 monthly state pension check meant that she and her family were going to have to do without. Beginning with her house, which she was forced to let go. And paying bills on time. And eating out. Or sometimes even eating at all.

“I never thought, when I was working, that I’d see the day that I couldn’t afford to pay the basics,” she says with frustration. “I have friends who go to the food bank sometimes and get us food. Just the basic necessities. Sometimes I’ve had to ask for assistance in paying my utilities. And that’s the hardest part — having to go to somebody and say, ‘I really can’t pay this. Can I apply and get a lower rate for my utilities?’ Sometimes they do that, sometimes they don’t.”

Not that Everetts ever imagined retirement was going to allow her to live as large as when she was working. But she did think she’d be able to afford her retirement dream of taking trips back to the Midwest to visit family or to splurge on an occasional evening of theater or a movie and a dinner in San Francisco.

Instead, her retirement travels have been more local. “Once in a while,” she admits, “I’ll take a day trip some place on the bus through the senior center — that’s like $36. I don’t go to movies. We very seldom ever go out to eat. I do play canasta, because it only costs me a dollar-and-a-half . . . You know, I don’t do a lot.”

She worries that California’s retired public workers are seen as having life too easy.

“The most anxiety is that they might cut Social Security,” Everetts says. “I know some of the stuff that they say is for the new people coming up, but there’s so much propaganda about it that you’re not sure.”

(Bill Raden is a freelance Los Angeles writer. Gary Cohn is a Pulitzer Prize-winning journalist who has worked for the Los Angeles Times, Baltimore Sun and Philadelphia Inquirer.)

The Job of a Lifetime: Caregiving for a Disabled Daughter