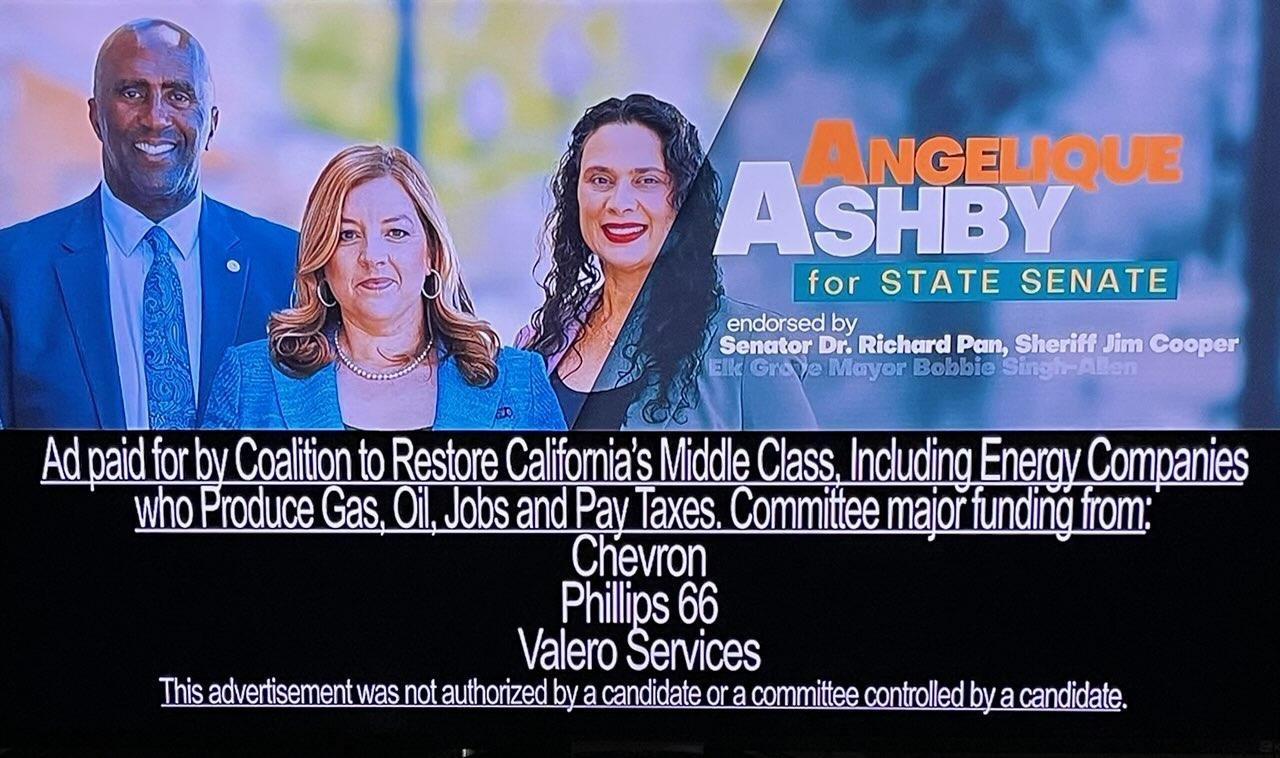 A still from a television advertisement in support of California Senate candidate Angelique Ashby.

Oil and gas companies have poured millions of dollars into political action committees and other groups to back state legislative candidates over the last year, and they are now focused on a last-minute push in several key races — including ad buys supporting a California Democrat who promised not to take industry money. Sacramento-area state Senate candidate Angelique Ashby is benefitting from $1.6 million in oil and gas expenditures, despite her pledge.

Since September, the industry has dropped nearly $6 million on television ads, polling and other services to support candidates through a PAC called Coalition to Restore California’s Middle Class Including Energy Companies Who Produce Gas, Oil, Jobs and Pay Taxes, according to disclosures. The seven races are spread across Southern California, the Central Valley and the Sacramento area — and could tip the balance in the Legislature toward the industry’s favor.

It’s the latest spending spree by this PAC, which has received a combined $8.65 million from California refinery owners Chevron, Valero, Phillips 66 and Marathon since 2021. The companies have also given money to a variety of PACs that receive big sums from business, real estate, law enforcement groups and even other PACs.

California considers media ads purchased through PACs to be independent expenditures, which are not subject to spending limits. That’s different from direct monetary contributions to candidates, which are capped at less than $10,000. PACs can’t coordinate with the candidates they’re supporting.

As California and the nation race to cut climate pollution before the planet heats to an untenable degree — locking in extreme weather events and societal upheaval — Capital & Main is tracking industry spending in state politics, where critical fights over permitting for energy infrastructure take place. The millions spent by the industry dwarf environmental and clean energy group spending, which together have given less than half a million dollars in this election cycle, our analysis found.

One candidate on the receiving end of the oil and gas industry’s largesse vowed to eliminate taxes on gasoline that fund state climate programs. But most haven’t publicly discussed why the industry is backing them. Six did not respond to Capital & Main’s questions.

The seven races in which the industry spent heavily over the last few weeks include those involving three Democrats, for whom it provided substantial support, reflecting a strategy of backing so-called moderate Democrats against progressive candidates. This effort amounts to the formation of a kind of third party, according to Mary Creasman, CEO at California Environmental Voters.

“The oil and gas industry made a concerted effort years ago to invest in Democratic candidates in smaller communities, more rural areas where economies are contingent on extraction,” Creasman explained. “Moderates are a creation of corporate polluters.”

It’s not just rural races, though — it’s across the state.

The oil and gas industry is spending over $2.5 million backing Democrats in two Sacramento races against rivals from the same party.

In the spring, the Coalition to Restore California’s Middle Class spent almost half a million dollars backing David Alvarez and funding an opposition campaign against fellow Democrat Georgette Gómez for the San Diego-area 80th Assembly District. Alvarez won the backing of top legislators while Gómez, a progressive and supporter of the Green New Deal, saw her campaign hit a wall. As a legislator, Alvarez then abstained on votes for key climate and oil and gas regulations.

Now the industry is spending over $2.5 million backing Democrats in two Sacramento races against rivals from the same party — including Democrat Angelique Ashby, currently the city’s vice mayor, who pledged not to take any fossil fuel money.

The Coalition to Restore California’s Middle Class spent $1.6 million on ads promoting Ashby over fellow Democrat Dave Jones for Senate District 8. It’s the largest single state-wide amount that the PAC spent on any candidate this month, according to filings. And it’s all the more puzzling, considering that Ashby’s website describes her devotion to fighting climate change. It also appears to violate her pledge not to take oil, gas or coal money.

Jones, her challenger, touts endorsements from the Sierra Club and other environmental groups. Ashby didn’t respond to a request for comment.

In another Sacramento-area race, for Assembly District 10, the PAC has dropped over $900,000 supporting Stephanie Nguyen, a city councilmember in Elk Grove, against Sacramento City Councilmember Eric Guerra. In candidate forums and public statements, Nguyen and Guerra both supported a transition to renewable energy and neither struck a progressive tone.

But Nguyen reportedly won the backing of outgoing Assemblymember Jim Cooper (D-Sacramento), currently Sacramento County’s sheriff-elect, whose seat the candidates are vying for. Cooper shut down a bill to divest California pensions from fossil fuels this year and took significant industry contributions. Nguyen’s campaign didn’t respond to questions asking why the industry is going to bat for her.

The price of gasoline remains a political lightning rod in the state as both industry and some Democrats blame each other for the steep rise.

Further south in the state’s Central Valley, where two Democrats are competing to represent parts of Bakersfield and other areas in Assembly District 35, which has a heavy oil and gas industry presence, the PAC sent $192,000 to a PAC backing Leticia Perez in recent weeks. Perez is currently a member of the Kern County Board of Supervisors, running against political newcomer Dr. Jasmeet Bains. In interviews with a local TV news station, both spoke of the oil and gas industry in the county, but Perez’s remarks were more sophisticated.

While Bains discussed local jobs associated with oil and gas production, Perez mentioned the region’s potential as a hub of capturing carbon dioxide, the main pollutant heating the planet. The industry is staking much of its hopes on capturing carbon from its operations worldwide.

“The technology we develop here is the technology of the future for the globe, to capture the carbon,” Perez said. “Being on the cutting edge of finding the solutions is really a positive thing everyone can rally around.”

After a catastrophic oil spill off the coast of Orange County late last year, even some local Republicans support minor efforts to rein in the industry. Republican Matt Gunderson, who’s challenging Democrat and current Encinitas Mayor Catherine Blakespear for District 38, even describes his interest in working “with the federal government to prevent additional off-shore oil leases.”

Gunderson didn’t respond to a request for comment. In an emailed statement, Blakespear’s campaign said she is “standing up to Big Oil.”

A PAC representing the Western States Petroleum Association financed only two Republicans this year since May; 16 others were Democrats.

The price of gasoline remains a political lightning rod in the state as both industry and some Democrats blame each other for the steep rise. The industry has sought to scapegoat state taxes for the high cost, which account for a relatively small portion, while industry watchers and officials cite evidence indicating gasoline refiners are overcharging California residents at the pump.

Republican candidate Juan Alanis, who’s running for Assembly District 22 to represent parts of Stanislaus County and Merced County, echoed these industry talking points on his website, prominently featuring his commitment to suspending the 0.54 cents per gallon of taxes that finance the state’s Cap and Trade and Low Carbon Fuel Standard programs.

The Coalition to Restore California’s Middle Class comped nearly half a million dollars for ads, polling and consulting costs backing Alanis. His opponent, Jessica Self, makes no mention of the environment or climate on her website. Alanis did not respond to a request for comment.

Oil and Gas Spread Giving Across Many PACs

Even as the industry backs Republicans, a closer look at other oil and gas committees indicates that the industry still views giving to Democrats as key to its political success.

Earlier this year, a different PAC called the California Labor and Business Alliance spent more than $124,000 supporting state Senate hopeful Daniel Hertzberg, the son of outgoing Sen. Bob Hertzberg, to represent the San Fernando Valley in Senate District 20. The PAC received at least $100,000 each from Chevron and PG&E as well as real estate and corrections officers groups.

Hertzberg, who describes himself as a progressive, faces off against Caroline Menjivar, also a progressive who supports transitioning to a “clean energy economy.” Hertzberg’s campaign didn’t respond to requests for comment.

Another PAC representing the Western States Petroleum Association, the largest oil business group in the state, financed only two Republicans this year since May; 16 others were Democrats.

WSPA’s biggest beneficiary has been Esmeralda Soria, a Democrat running for a Fresno-area Assembly seat powered by $105,883.64 in oil and gas money. She once campaigned as a progressive but has now recast herself as a moderate; her Republican opponent, Mark Pazin, doesn’t appear to have benefitted from industry money.

Soria’s campaign didn’t respond to a request for comment.

This story was updated on Oct. 20, 2022 to reflect recent financial filings by the Coalition to Restore California’s Middle Class Including Energy Companies Who Produce Gas, Oil, Jobs and Pay Taxes.

A Republican Attack Ad Gets Its Facts All Wrong